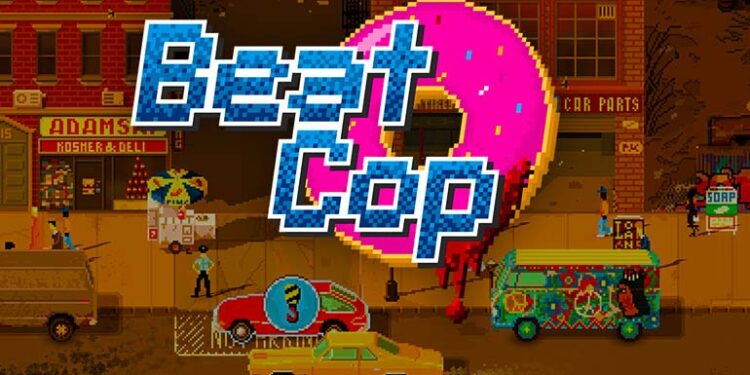 I grew up in an era where Sierra dominated the gaming market with their point-and-click adventure games. My favourite of these was a little gem called Police Quest, a game more focused on letting you learn about police procedures than having you experience the nitty gritty of being an actual cop. Beat Cop, although similar in its pixelated look to some of the earlier Police Quest games, places more focus on you patrolling a single street and trying not to get killed by the various gangs that fight for control of it. Set in the 80’s (in case you couldn’t tell by the synth-filled soundtrack), Beat Cop tells the tale of Jack Kelly, a smart mouth detective who gets demoted to a beat cop after a shootout at a senator’s mansion. It’s the type of cut-and-paste narrative one finds in most 80’s films: the cop being wrongfully accused and has to prove his innocence. As an 80’s inspired game, it does an admiral job of entrenching players in the era where cops shot first and asked questions later.

A day in the life of Officer Kelly starts off with him receiving his goals for the day. These usually consist of giving ‘X’ amount of tickets or patrolling the whole of the street within a certain time limit. Sounds easy enough and, surprisingly, it is. At its core, Beat Cop is a time management game with Kelly being assigned a set of goals which he needs to achieve each day. For a game concerned with time management, I never found myself running out of time and not being able to complete my daily tasks. Heck, I even found myself having extra time on my hands for completing some, how do I put this, “less legal” errands. In-between writing parking tickets and trying to survive the mean streets, Kelly has only 21 days to try and clear his name. Where Police Quest placed focus on making you ‘the best cop you can be’ by having you learn all the boring procedures a good cop should follow, Beat Cop approaches being a cop a bit differently. The game gives you the option of performing your job perfectly for meagre pay or bending the rules (ever so slightly) every now and then for a little extra cash (and who doesn’t need a little extra cash, you know, for stuff).

As someone who tends to play games as the morally perfect hero, I tried, at first, to ignore the enticements that hounded me around each corner. This however quickly changed as I found myself falling victim to the ever-increasing temptation of having more cash lining my pocket. It’s an interesting dynamic which reminded me that sometimes it’s much easier to be crooked than being the all-around good guy. I still prevented some crimes, caught some pickpockets and wrote a few parking tickets, but every now and then I would find myself earning a few bucks on the side. I kept telling myself that it was ok as long as no one would get hurt and, with the consequences of being caught out being a mere slap on the wrist, why wouldn’t I enrich myself a bit? It never felt as if there were any real consequences to being a bit crooked, so I continued down the crooked path. Along with completing these tasks, officer Kelly must also balance his reputation with the Italian mob, neighbourhood street gang and, of course, his fellow cops. Gaining favour with these groups usually involves completing some tasks, looking the other way or just being nice to them. It’s a precarious balancing act as buddying up with one faction usually means pissing off the other. I found myself enjoying playing off these three factions against one another while balancing my daily responsibilities.

However, I was disappointed that a game which gives players quite a bit of choice in how they approach smaller tasks doesn’t give players any say in how the overarching storyline unfolds. Along with this issue, I also found a few inconsistencies/bugs that would end up with me failing missions, without even knowing I had to complete them or being told to stop a robbery that wasn’t taking place. Bugs like these didn’t break the game but ended up becoming a bit of an annoyance. I’m a busy cop trying to make a living and now I have to waste my time running after imaginary crimes. There is no doubt that the game revels in its 80’s-ness as many of the elements one would expect from a cop tv series or film from the era are found here – such as the stereotypical black captain who continually shouts orders at you. But there were times where I found the game treading into areas which seemed to be controversial just for the sake of it. Comments which tended to be overly racist or misogynist didn’t add much to the story and only served to alienate me at times. There’s no social commentary to be found here and I struggled to make sense of why the developers decided to bring up these sensitive subject matters without addressing them fully.

Unlike the Grand Theft Auto series that addresses certain matters in a humorous way in order to bring their point across, Beat Cop half-heartedly brings up these subjects and forces them down the player’s throat without giving them choice in the matter. Even though my Jack Kelly was a good cop who made a few, shall we say debatable choices, I had no way of stopping him from sprouting racist and unsavoury remarks whenever he opened his mouth. This is a shame though as the game had the opportunity to address these subjects in a creative and satirical way, but throws this chance out the window. It’s a low down dirty shame because I not only found the nostalgic pixelated graphics and synth soundtrack appealing, but I also appreciated most of the mechanics that the game had to offer. Unfortunately, the game’s fascinating concept and mechanisms are marred by the sometimes cringeworthy and unfunny writing and a few glaring bugs. I genuinely wanted to love Beat Cop but, much like the street Officer Kelly patrols, I found that it had a dark underbelly that I just couldn’t look past, even if you bribed me. 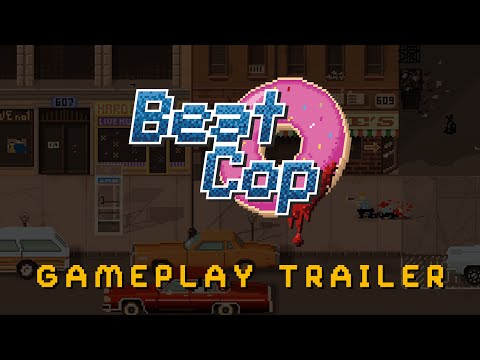