Bear With Me: Episode Two Review – A Humour-Filled Second Act 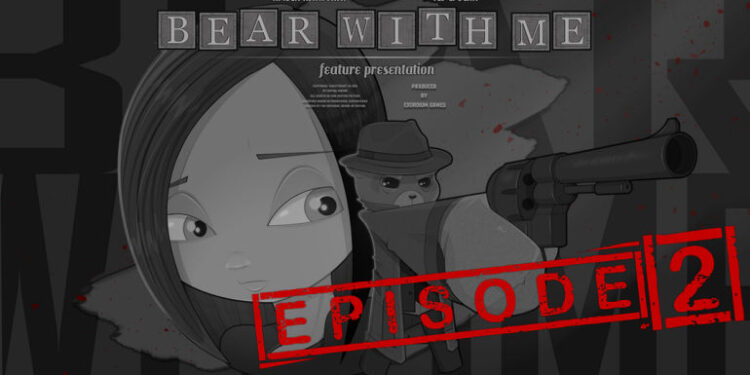 A few months back we featured the Episode One from Bear With Me, a noir, point-and-click title filled with satire and fun. Bear With Me: Episode Two has finally landed, and while it isn’t the end of the adventures of Amber and Ted E. Bear, it adds quite a bit to the overall plot and mystery.

Personally, I have some inclination as to where the story is headed. I had the same feeling halfway through the first episode. Only time will tell whether or not these presumptions come to fruition, but it doesn’t really matter if it does. All that matters, for me at least, is the journey in getting there. Bear With Me is quite journey. We last left the duo as they entered the gates, rather cheekily, to Paper City. We pick things up a short while into their journey there. It’s hard to believe that all the goings-on from the story is based on Amber’s imagination, it plays out really nicely as a whole. From the shrewd drawings to the sketchy one-liners, the game covers just about all the angles when it comes to its jokes, picking off scraps from the politics, news and current affairs, and again, lines from your classic films and games from yesteryear.

As always, Bear With Me: Episode Two never seems to take itself seriously, leaving a trail of bad jokes in its wake, with a few fourth wall breaks thrown in for good measure. One of these includes a poorly acted scene in which the actor is clearly reading his lines, to which the characters call him out on and to which he simply replies that he’s just there to fulfil the continuation of the plot. Such dialogue extends to some of the narration, and even the inventory items you wish to conjoin to use as props throughout the game. While it isn’t a necessity to know the entire catalogue of the 80s and 90s movies, games and series, the many pop culture references scattered throughout (as in the first episode) will only add to the great humour. While the story follows a more linear approach in Bear With Me: Episode Two, there’s still a bit of detective work to be done. Most of the mystery this time around comes from solving puzzles and finding the item on the list. Unlike Episode One, where I often found myself in a loop of back and forth to find the missing clues I hadn’t picked up on. While I did enjoy this, I do feel that some of the challenges has been taken out, moving more to a point-and-click puzzler than a detective game.

Bear With Me: Episode Two has a slightly longer runtime than the first episode, although it can be completed well within the two-hour mark. I can understand the logic behind the decision from an indie developer, but spreading the game across numerous episodes (in the form of DLCs) does nag a bit on the debate on the DLC market model. I was a little saddened by the fact that the game will now move onto a third episode, with the duo no closer to finding Mr. Red. That said, the news is also good in that we’ll get to play another hour or two when the next episode releases, no doubt filled with more laughter and banter.