by  Peter Crafford
in Comics 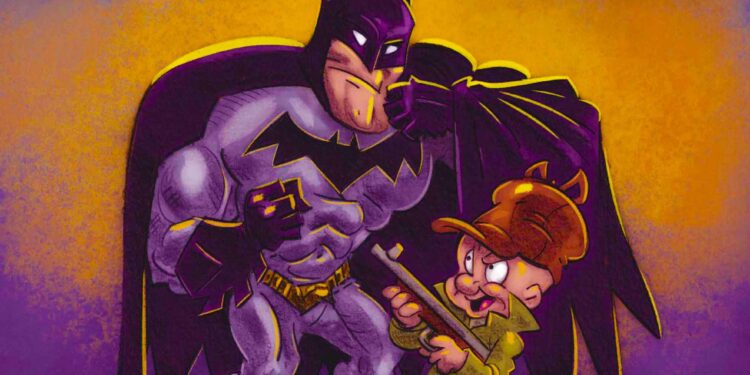 Imagine Sin City. No, that’s way too Frank Miller. Rather, imagine Batman: Year One. Okay, that is the right amount of Frank Miller. Imagine pulpy, rain-soaked seedy underworlds filled with trench coats, shotguns, shadows, smoky bars frequented by crooks, anti-heroes and dames in distress. How far removed does that sound from singing lilies and a bunny looking for the way to Albuquerque? We review Batman/Elmer Fudd Special #1. I used to watch Looney Tunes shorts on Cartoon Network, way back in 1995, which served as a proper introduction to the characters. The completely over-the-top scenarios within which these characters constantly found themselves rivalled those of competing properties from Disney and MGM Studios. Wildly (techni) colourful. Densely orchestrated symphonic scores. An array of anthropomorphic characters with iconic catchphrases and even more iconic rapports. In Batman/Elmer Fudd Special #1, Elmer Fudd is looking for the man who killed his lover Silver St. Cloud and, with his typical Fudd-esque way of speaking, he delivers a monologue which is both outright hilarious and highly engaging. You see him walking into Porky’s and he is hunting a “wabbit”, specifically Bugs The Bunny, a low-life crook with a heavy overbite and a distinct penchant for carrots. It’s the ingenious way that the artwork by Weeks and Kindzierski take these characters and make them actual human beings. They resemble them in vague facial expressions, nuances and sayings, but in this world they are everyman outcasts.

With a proper whodunit structure leading Fudd on a bloodthirsty quest to kill his “pwey”, the clues and tip-offs lead him right in front of Bruce Wayne. With an attempt on Wayne’s life, Fudd gets confronted by probably one of the most aesthetically pleasing versions of Batman I have seen in recent comics. A proper old school, black, blue and grey-suited Batman lets rip with the fisticuffs and with stunningly rendered shadows adding to the noir feeling of this book, we get way more bang for our buck with this one. Such an unlikely bout turns into an even more unlikely partnership where these two stalwarts of Warner Bros history team up to solve the case. I always find Batman in detective mode so satisfying as it speaks to the real-world element of the character so well. Tom King has such an innate sensitivity when it comes to writing for this character and I hope and pray that he somehow lands in a writers room for a Batman movie.

King, Vaughns and Strachan end Batman/Elmer Fudd Special #1 with an 8-pager done in a traditional, kid-friendly style which illustrates the efficacy of the simple, danger-driven storytelling the Tunes are known for. It’s a nice homage to the source material and when the tonal shift does occur on page 32, don’t close the book just yet. Elmer Fudd is on the loose and wabbit hunting season is still open