Batman vs Superman: Frenemies For Over 75 Years Batman and Superman. Are they friends or enemies? Or perhaps Frenemies? For over 75 years, the two superheroes have shared a page, but what gives with this complicated relationship? We take a look at Batman vs Superman over the years – the cat fights, the makeups and the breakups. 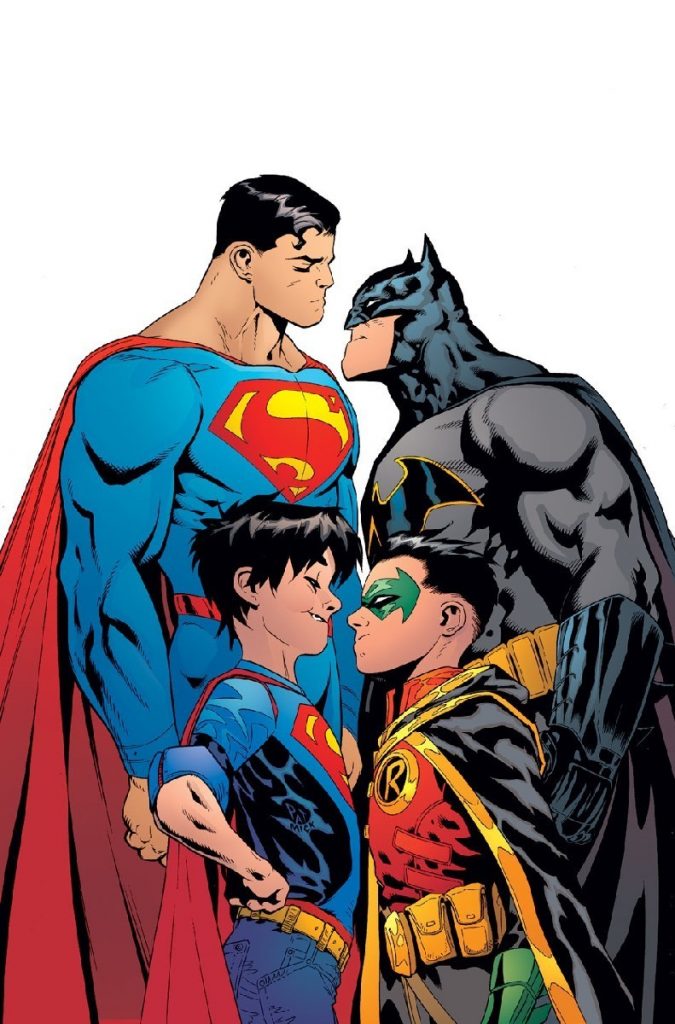 On the brink of World War II, Superman and Batman make their first appearance together on the cover of New York World’s Fair. Sadly, the two haven’t interacted with each other just yet.

Both characters show up helping out at a fund-raising drive for war orphans in All-Star Comics No. 7. Again, they don’t really interact much.

The radio drama Adventures of Superman bring Superman and Batman together for the first time. Superman helps Batman after he is turned into a wax statue.

Superman No. 76 sees Batman and Superman meet for the first time in a comic book. Bruce Wayne and Clark Kent get caught changing into costume. They both agree to keep each other’s identities secret. 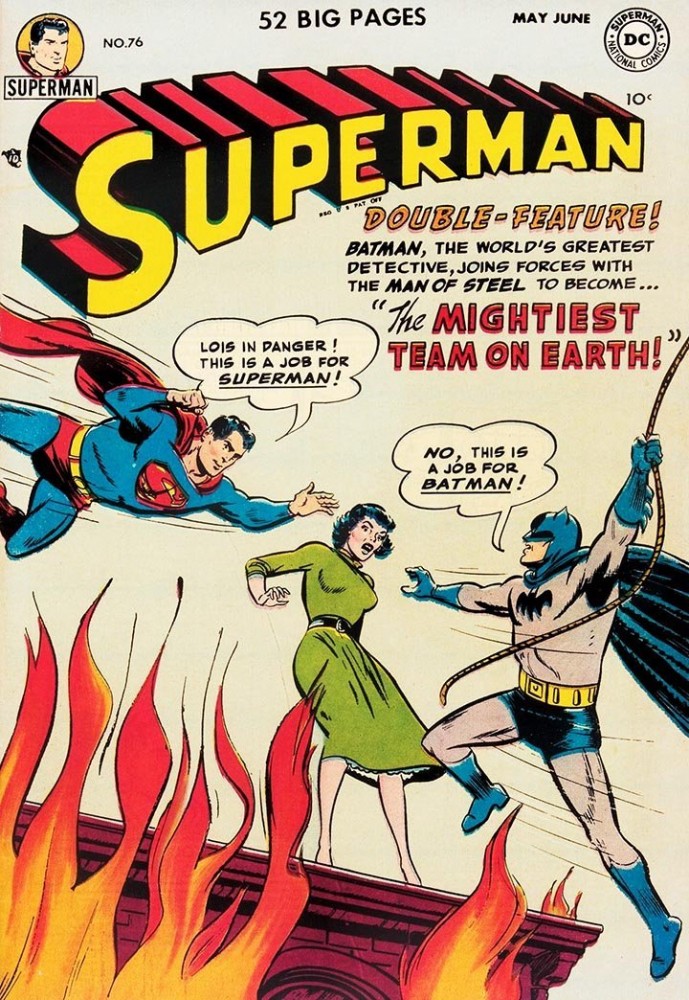 Batman and Superman have their first conflict in World’s Finest No. 76. They are competing to determine whether Gotham City or Metropolis will host an electronics convention.

In World’s Finest No. 95, Batman and Superman, both under the influence of alien beings, have their first real fight. It’s Batman vs Superman. The fight is the first of many to come.

In a bizarre tale, World’s Finest Comics #151 sees he evolutionary ray of a deceased Kryptonian scientist turn Batman into a hyper-evolved, arrogant man of the future, and Superman into a slow-witted caveman.

In World’s Finest No. 220, Batman says the wholesome Superman can’t understand a particular villain’s desire for vengeance. This begins to establish the differences between the character’s moral codes.

In Batman and the Outsiders #1, Batman quits the Justice League. Batman and Superman have a major fall out. Batman believes Superman isn’t willing to do what’s necessary for fighting evil. “We’ve always served as an example to the others,” Superman says, before Batman counters, “I never asked for that, Superman! I never wanted men to imitate me—only fear me!” 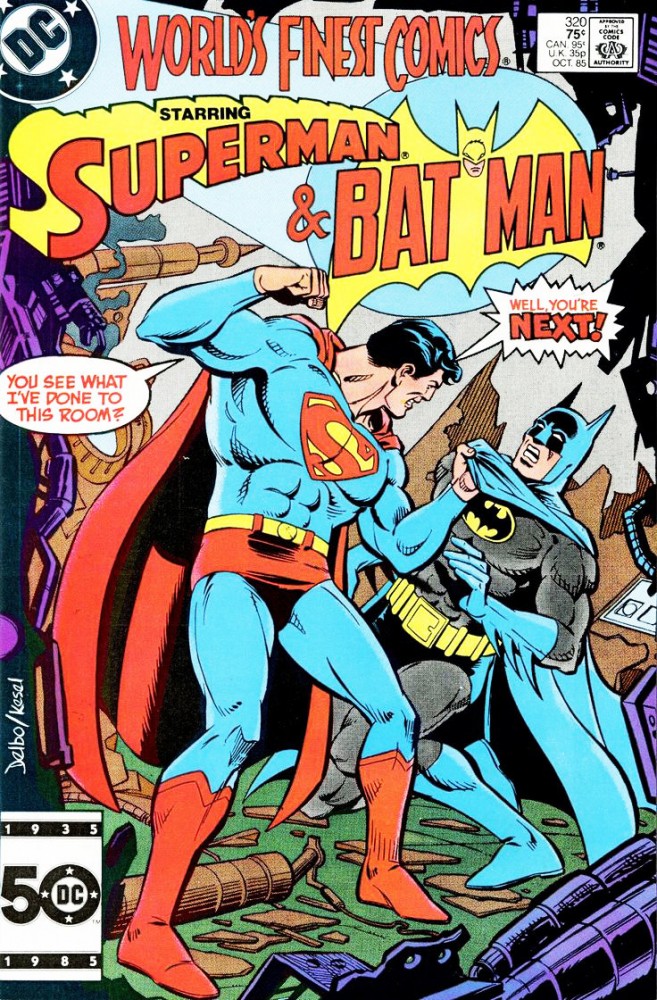 History’s most famous Batman-Superman fight occurs. Frank Miller’s The Dark Knight Returns is released. A weakened Superman loses against an angry Batman who uses new battle armor and Kryptonite to defeat him.

In Superman: The Man of Steel #21, Superman gives Batman a ring made of Kryptonite. He is to use the ring if he ever gets mind-controlled.

The Kingdom Come comic finds Batman and Superman arguing once again. This time they are sparring over who should safeguard the world (humans or superhumans).

In Batman: Hush, Poison Ivy’s neurotoxin causes Superman to takes-on Batman. However, Superman manages to “hold back” (as a result of his subconscious attempting to fight-off the mind-control).

In The Dark Knight Strikes Again, Superman is ordered by the president to hunt down Batman. The Dark Knight is one step ahead of him and lures Supes into the Batcave where he beats him into submission with kryptonite gauntlets. 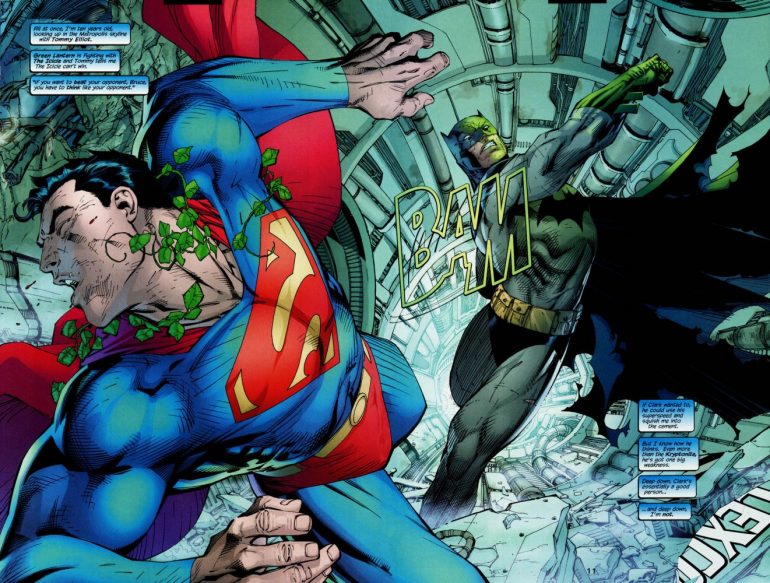 In Batman #612, Batman claims that if “Clark wanted to, he could use his superspeed and squish me into the cement” and that Superman’s big weakness is that “Deep down, Clark’s essentially a good person”.

Bruce Wayne receives Kryptonite from Lex Luthor, which he uses against Superman in Lex Luthor: Man of Steel. Batman believes Superman is a potential threat to humanity. However, Superman ends up winning this fight.

Superman Sacrifice sees Maxwell Lord use mind control on Superman. The Man of Steel ends up fighting against his fellow Justice League members, including Batman. The Dark Knight takes a very bad beating.

During a fight with Silver Banshee, Superman’s powers are transferred to Batman in Superman/Batman: Super-Bat. In return, Batman takes on crime in Gotham. After defeating most of the Justice League, Supergirl appeals to Bruce Wayne to stop. However, it’s not until a powerless Clark Kent takes a rather brave beating from super-powered Batman that he realizes his faults.

In Justice League: Origin, Superman fights against Batman once again. Again, Batman feels threatened by Superman’s alien origins. Again it’s Batman vs Superman. However, Batman is outmatched here. He is defeated by the Man of Steel until the two eventually talk-it-out. 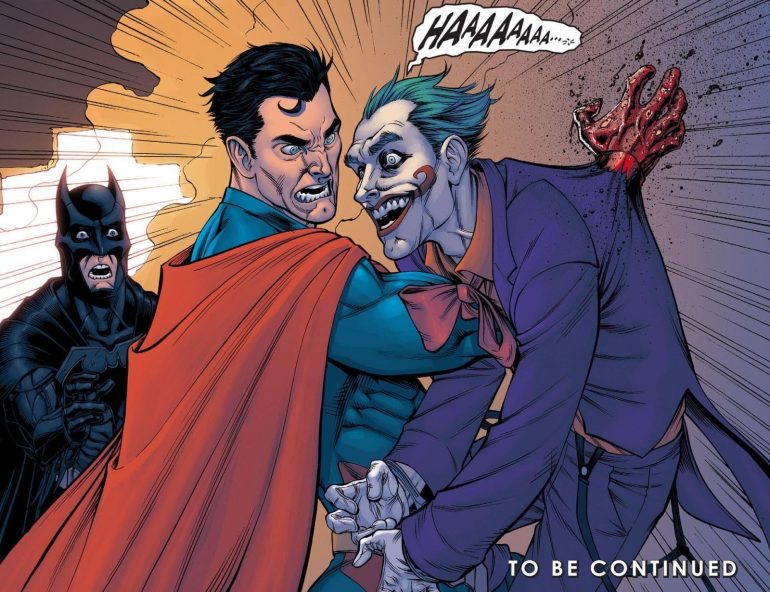 After the Joker detonates a nuclear device in Metropolis, and tricks Superman into killing Lois Lane (as well as his unborn child), Superman goes rogue. In Injustice: Gods Among Us, Superman appoints himself High Councillor over Earth. The Man of Steel enters the Batcave and breaks The Dark Knight’s back over his knee. Of course, Superman employs the help of a different Superman to bring order back to the world.

When a poison transforms Justice Leaguers into Joker hybrids, the team go against Batman. Batman: End Game sees Batman in power armour – trading out his usual Kryptonite gloves for gauntlets with microscopic red son attachments. After being defeated by Batman, Superman goes rage again – until Batman spits a piece of Kryptonite into his eye. 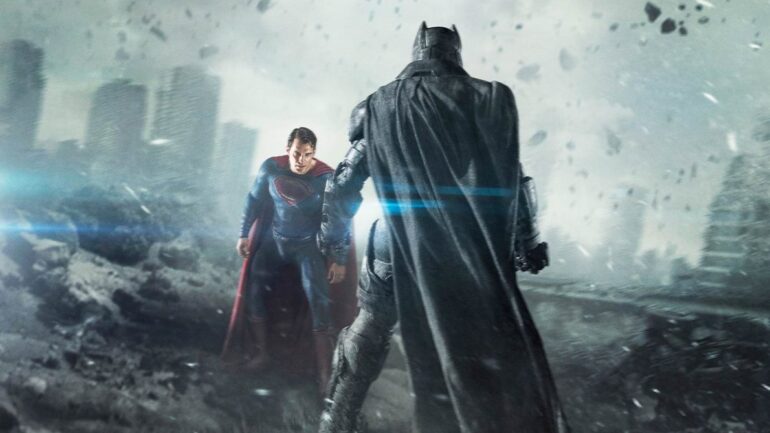 Black and blue. God vs. man. Day vs. night. Batman v Superman: Dawn of Justice sees Superman and Batman go toe-to-toe for the first time in a movie. Once again, the fight stems from Batman’s distrust of Superman’s alien powers and some manipulation from Lex Luthor.

In Justice League, Batman admits that the world needs Superman.