In Batman Unlimited: Monster Mayhem, it’s Halloween time once again, even in Gotham. When the hulking Solomon Grundy and the screaming Silver Banshee escape from Arkham Asylum and encounter some cosplaying joyriding trick-or-treaters dressed as Batman, Robin and Green Arrow, you know something’s got to give. Thankfully, Nightwing and Green Arrow are on the case, and soon enough Batman and Red Robin get involved too. It turns out that the master of fright the Scarecrow is behind the breakout, and he, Grundy and Banshee and Clayface are going to be making this a Halloween that Gotham won’t soon forget. So what’s the most terrifying plan they’ve got? To work for the Joker, kidnap a computer programmer and bring Gotham City to its knees by creating a computer virus. Oh, and to make Solomon Grundy the new Chief of Police so that he can play hide-and-seek with Commissioner Gordon.

Cyborg is in Gotham City too and has been equipped with a new jet-pack. Unfortunately, his computer systems seem to be just as vulnerable to the Joker’s virus as the rest of the city. Unable to use their technology, Batman and the other heroes have to go back to basics. Sometimes they fight the villains, sometimes they fight their own tech-heavy vehicles, and Batman has to enter a virtual reality world to fight the Joker, all while the Joker insists that Gotham throw him a parade as he attempts to have his virus contaminate the world. Well, that and the villains pose for a selfie. Monster Mayhem is the second film in the new Batman Unlimited series, but what is Batman Unlimited? For those who don’t know, it’s a toy line from Mattel and the films are based on the designs in that line. While this is Batman, at times you can’t help but wonder if it’s also just a marketing gimmick because it’s also a very different Batman. The emblem on his chest is garish, he rides a motorbike that transforms into a robotic wolf, the police have flying cars, Red Robin has a hoverboard and every character seems to have accessories and vehicles which are probably sold separately, batteries not included.

Does anybody remember the final episode of Brave & The Bold (Mitefall!)? Bat-Mite said that the one thing fans hate is extreme toy merchandising. He forced Batman to wear Alpine-Climbing Battle Armour and ride a Neon-Powered Super-Street Bat-Luge to prove his point. Toy lines aren’t always good for creativity, because the marketing removes the characters from what they’re supposed to be. Did anyone listen to that warning?

I’m only asking because, in Batman Unlimited: Monster Mayhem, Batman rides a robotic dinosaur with a mounted machine gun on it at one point. No kidding. Getting away from that, the story in Batman Unlimited: Monster Mayhem is decent if uninspired. If you’re a long-time fan then you may have read or seen some of these ideas before, from No Man’s Land to the Batman Animated Adventures episode What Is Reality? The Halloween setting is pointless, and many of the heroes and villains are only there to make up the numbers. The action is awkwardly mixed with slapstick comedy and, while it’s good to see a lighter side to the DCU, it’s a clumsy concoction. It works… but only so far.

There are some inspired moments in Batman Unlimited: Monster Mayhem, such as seeing Nightwing and Green Arrow bonding as friends, and Nightwing being forced to confront his past. However, other scenes are almost cringe-worthy: Gotham can’t use solar power because there’s hardly ever any daytime there; the police stand idly by as criminals (literally) parade in front of them just because their guns don’t work; there’s a fire-powered Bat-Signal; and Gotham is so isolated that nobody in the rest of the world has noticed what’s happening. It’s too unbelievable, even for this. 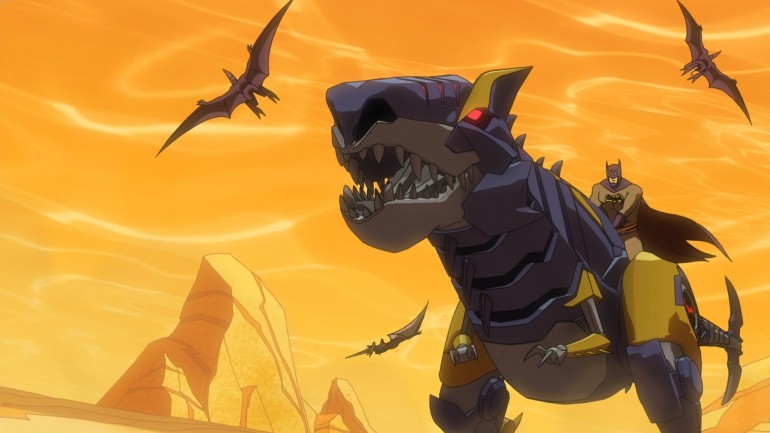 On a more positive note, the animation in Batman Unlimited: Monster Mayhem works well. Some of the designs may look questionable, but it all flows far more smoothly than other recent DC productions. Credit also has to be given to Troy Baker voicing The Joker. If you didn’t know better you could almost swear that it’s Mark Hamill doing the voice, and that’s impressive.

Sadly, those factors don’t save Batman Unlimited: Monster Mayhem from feeling like an 80-minute advertisement to sell toys. It might be entertaining for the kids, but that’s about it. For Halloween this is no treat, and if you watch it then the trick is on you.