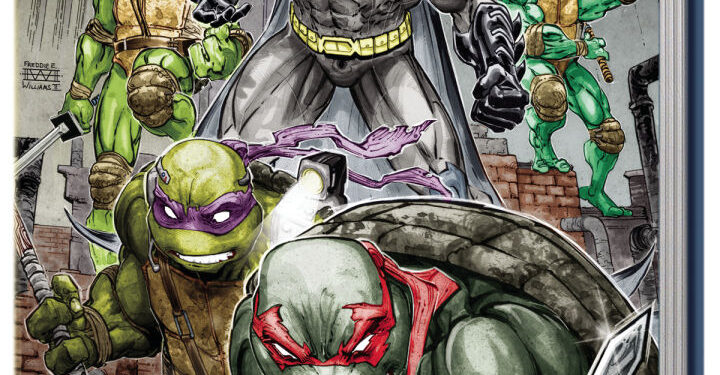 A few months ago I reviewed the first issue of this entertaining Batman/Teenage Mutant Ninja Turtles crossover. Now the entire arc is being published as a graphic novel. But is the story worth all the hype that has been surrounding it? Both the titular heroes are trained ninjas, so this crossover makes perfect sense. Batman blends in perfectly with the Teenage Mutant Ninja Turtles franchise.

As expected, our group of heroes find themselves teleported into an alternate dimension and they land up in Gotham City. But they did not come alone. Shredder and the Foot Clan have followed them. Batman has to come to terms with the fact that he is allying himself with mutants from another dimension and Shredder has joined forces with one of his greatest enemies; as they work together to claim Gotham as their own.

The plot of Batman/Teenage Mutant Ninja Turtles may seem rather straightforward but it is the interactions between the characters of these two franchises that make for an entertaining and memorable read. The art is great. It is dark and it makes sure the Ninja turtles fit right in. The colours work well and do a great job of complementing the story that is being told. Batman looks big and muscular in this series, which works well. He still needs to be the leader and dominant figure in this crossover. His relationship with The Turtles looks and feels believable. The action sequences are pulled off flawlessly, making for a great read that is easy to the eye.

Thankfully, this is not a happy flappy cross over to please the fans. This is a new chapter in the story of the Dark Knight, one that has real consequences and births new allies.