When the news broke that Adam West and Burt Ward would be returning to portray Batman and Robin in Batman: Return of the Caped Crusaders, even the most hardened Internet troll cracked a smile.

[dropcap]B[/dropcap]atman fans owe West and Ward a world of gratitude for bringing the Caped Crusader and Boy Wonder into the mainstream and catapulting the Batman brand into popular culture. Nonetheless, the famed TV series, starring West and Ward, was released in the sixties, generic and overly campy, so how would modern-day fans react to a non-scowling Batman who loved to dance? Does the format hold up?

Well, the story’s outrageous as one would expect. Joker, Penguin, Riddler and Catwoman hatch an evil plan to endanger Gotham City. Naturally, Batman and Robin come to the rescue, solving clues and battling the villains. The chase eventually leads to space (yup, I told you it’s nuts) and Catwoman scratches Batman, infecting him with Batnip (I kid you not) that progressively turns him into a bad guy. After several twists and turns – and a replicator ray gun – it’s up to Robin and Catwoman to save him.

Filled with the expected puns, “Holy [random comment], Batman!” and alliteration, Batman: Return of the Caped Crusaders is the perfect tribute to the TV series. The mandatory theme song, expository labels on everything, moral lessons, deductive clues and onomatopoeia are all present, as are references to later Batman stories (such as Tim Burton’s Batman and Frank Miller’s The Dark Knight Returns). There’s even a sideswipe at Christopher Nolan’s The Dark Knight Rises and its unsatisfactory ending, which I did find quite humorous since the campy Batman series called out the serious one for being unrealistic. Screenwriters Michael Jelenic and James Tucker deserve credit for being able to truly capture the spirit of the original show and still make it entertaining in 2016.

Sharply written and a great continuation of Batman ’66’s legacy, Batman: Return of the Caped Crusaders will entertain the fans of the original series and perhaps the diehards. For the average filmgoer or Batman fan, though, I think this Bat-comedy might be a stretch too far. 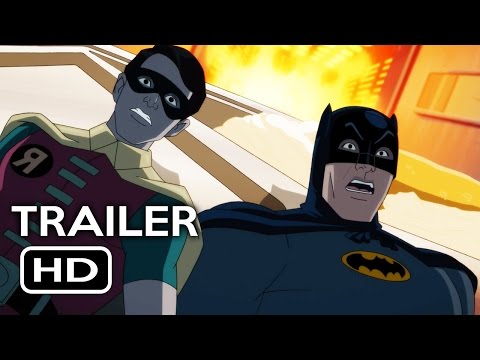