Batman And Harley Quinn Review – Really Not For Kids 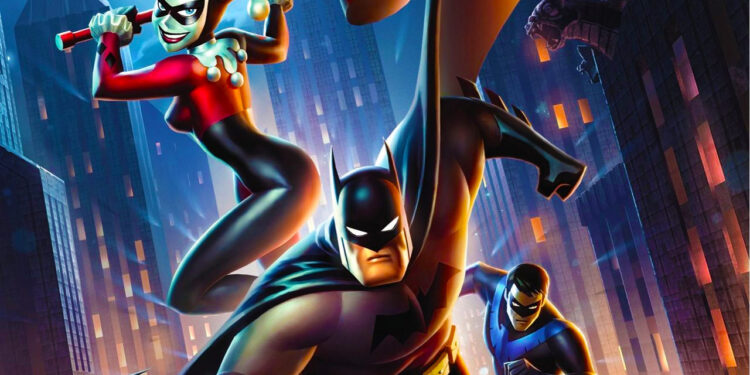 When Poison Ivy and the Floronic Man join forces to turn all animal life on Earth into plants, Batman and Nightwing need the help of an unlikely ally: Harley Quinn. In Batman And Harley Quinn, Harley, out on parole and trying to lead a normal life as a waitress, is dragged back into a world of caped crusaders and supervillains. However, given her friendship with Poison Ivy and her chaotic nature, can the no-nonsense Batman learn to trust her?

When news of Batman And Harley Quinn first broke, I was as happy as anybody. You only have to look at the artistic style and you’ll see that it’s the same as the classic Batman: The Animated Series, and that’s automatically going to please every Batman fan out there. Early footage of it looked just like it too, and it seemed like a welcome return to the greatest animated superhero show ever. Then it was announced that this would be a more adult take on the old Batman show. Whether that was because of the current popularity of Harley, DC/Warner’s ongoing plans to target superhero stories at older audiences, or just because that was the direction the creators wanted to go in… it was cause for concern, and with good reason. In case you’re worried about this more “mature” take on it, be prepared for a shocker because this really isn’t for kids.

Yes, there are raunchy sex gags, from the obvious visual butt shots to Nightwing getting an erection, before Harley pretty much rapes him – albeit in a way that’s pushing the boundaries of a PG-13 rated film. If you’re a fan of that classic animated show, when moments like that happen you’ll find yourself thinking that it’s so, so wrong.

Once you get beyond that and if you’re an adult, there’s some decent comedy here though. Seeing Batman loosening up is always amusing, and a rocking scene in a henchman bar (where Harley belts out Blondie’s Hanging On The Telephone) throws in references to both Batman ’66 and Miller’s Dark Knight. An extended fart joke in the Batmobile provides some added silliness, while Nightwing offering his low opinions of certain Justice League members is priceless. As for the story, it’s almost not even worth concerning yourself with. Not that it isn’t a decent one, mind you. It’s just that, in a move taken straight from the Deadpool film, the story is secondary to the characters and how they interact. Who cares about saving the world when Nightwing can dance, Harley can clobber her old prom date who stood her up, and Batman looks like an idiot because he didn’t pack bug spray in his utility belt? Even the climax of the film is zany and inconclusive, meaning the whole thing is just a giant joke and not to be taken seriously. Which is kind of weird, since there are some painfully serious moments in it too which contrast awkwardly.

There’s some worthwhile character development, in particular, Harley’s struggle to find work because of her criminal record even with her medical background. Fans of DC’s universe will get the many references, and appreciate the Swamp Thing cameo, while the bond between Harley and Ivy is made clear. Yet there’s no talk of the Joker to cloud the situation, which is both a good thing and a bad thing because it would be fascinating seeing a reformed Harley’s take on the man she was obsessed with.

So basically, this is the film which corrupts your memories of Batman: TAS but also provides a lot of fun… as long as you’re willing to play along with its clumsy, and sometimes poorly timed, sense of humour. There’s lots of anarchic pleasure to be found in Batman And Harley Quinn (especially if you’re a fan of Harley) but, for some, it may all be a bit too much.