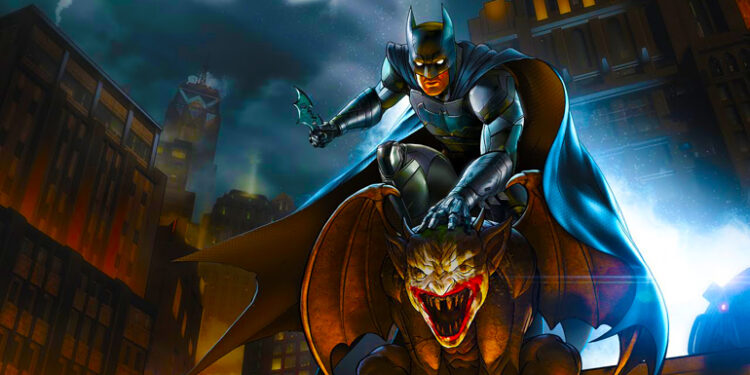 After the success of Batman: The Telltale Series, the episodic point-and-click Dark Knight adventure is back for a second season. This time, though, the Caped Crusader battles against the puzzle-master himself, the Riddler. And we’ve received the first episode from Batman: The Enemy Within, ‘The Enigma’, to check out. Set a year after the events of the first season, this episode can be played in isolation or it can include the choices you made before in the series. In terms of detail, it’s nice to see some of the consistencies have been carried across as well, such as Bruce Wayne missing a bit of his ear after his run-in with Lady Arkham – it’s the little things. If you’re expecting a complete overhaul of the graphics and gameplay engine, then you’re set for disappointment. The look and feel of this season is identical to the previous one, with the major change being the Dark Knight’s new costume design. While I’m aware that Telltale’s aesthetic isn’t everyone’s cup of tea, you should know by now what to expect – and Batman: The Enemy Within is no drastic departure from this. As you’re aware, the action is fairly limited here, as you spend more time doing detective work or having conversations that impact your character’s path. Fortunately, the narrative itself has improved for this new season. Of course, it’s still early days and it could venture into the Children of Arkham‘s strange and odd waters, but it seems like the developers are consciously trying to balance the act between respecting canon and being its own beast. That said, some of the dialogue choices are mind-bogglingly mundane and don’t further the story in any way. It’s a tricky business allowing someone to create their own Batman adventure, filled with possibilities, but some of these options are only there to take up space.

Troy Baker once again returns to voice Bruce Wayne/Batman. While I prefer his portrayal of the Joker in Batman: Arkham Origins and Batman: Assault on Arkham, his performance as the billionaire playboy/vigilante doesn’t disappoint, as he remains consistent and believable as both as the man and the Bat. The real star of the show, though, is Murphy Guyer’s Jim Gordon. Like the previous season, his nuances and quirks are spot-on for the hardened commissioner and he brings Gordon to life in a way that we haven’t experienced since the late Bob Hastings’ performances in Batman: The Animated Series. Like before, Batman: The Enemy Within is absorbing, sucking you into this world and leaving you counting down the days until the next episode is released. That said, after you’ve experienced all the shocks, secret, and surprises of this episode, it’s difficult to find the replay value in this, since the end result will always push you in a certain direction. If you aren’t a fan of what Telltale is doing by now, this game is unlikely to change your mind.