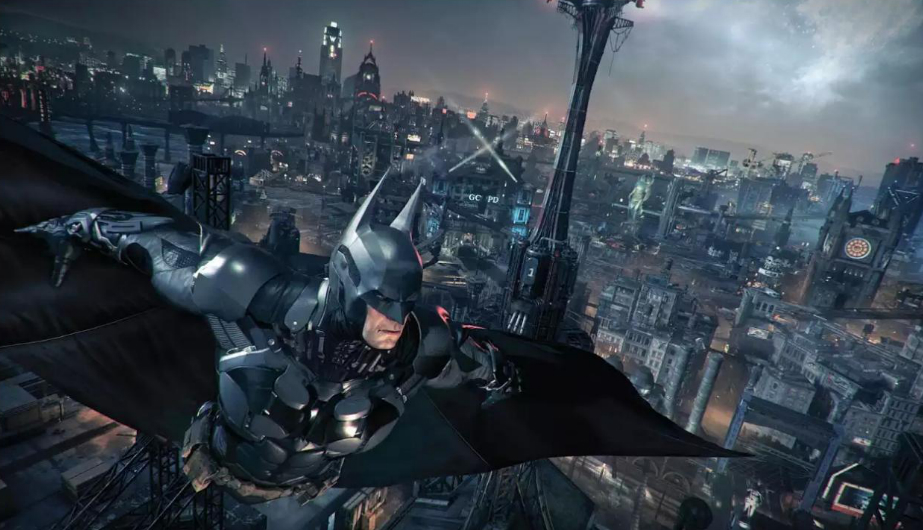 The Batman: Arkham series has in many ways laid the foundations for what a modern videogame adaptation should be, as well as what a modern open-world action-adventure game where you play a single extremely powerful individual should be. It is distinctly possible to say that a new game is “Arkham-esque.” But when it comes to a 4th title in the franchise, what is there left to do with the character, concept and gameplay form that hasn’t yet been done?

Arkham Knight is chronologically the sequel to 2011’s Arkham City, and it is also the next title developed by Rocksteady since then, as 2013’s Arkham Origins was developed by Warner Bro’s in-house department. The series has felt like it’s shown us all the major angles of Batman that could be viewed in this universe, and so, Arkham Knight takes the very sensible route of feeling like a form of closure to the Arkham Universe’s Batman. To that end, it’s bigger and more expansive than ever before.

A year after the events of Arkham City and the death of the Joker (4-year-old spoiler), Gotham seems to have entered a new period of calm and peace. However, a terror attack by Scarecrow causes the city to be evacuated by all except the criminal classes and supervillains. Joining the police in trying to reassert control is Batman, who must not only contend with these known enemies, but with a powerful new militia run by the mysterious figure known as the Arkham Knight.

In regards to the Arkham Knight himself, he’s a more interesting character at the start of the game than at the end, as it soon becomes incredibly easy for any Batman fan to guess who he actually is, and even for non-fans, the game doesn’t exactly make it difficult to work out. As his mystique is diminished, so too is his effectiveness as a driving villain in the story. He does, however, have some good moments, and occasionally works well as a Batman parallel figure in terms of how you must combat him, but his status as Scarecrow’s subordinate does, in fact, point out who the real power is in the story.

The story as a whole is competent, but not as skillfully handled as Arkham City’s. There’s a good feeling of “anyone can die,” unusual in a comic book setting of any kind, and various plot points are handled well as themes. The best of these is probably the declining mental state of Batman himself, represented by Joker, who exists as a figment of Batman’s subconscious and follows him around, offering commentary and popping up at random points to act in completely unexpected ways (after all, he’s not really there.) This was handled extremely well in my opinion, and I was constantly amused/bemused by the way he was written and presented. Anyone who was finally glad that the Joker was gone will, however, be a bit disappointed. 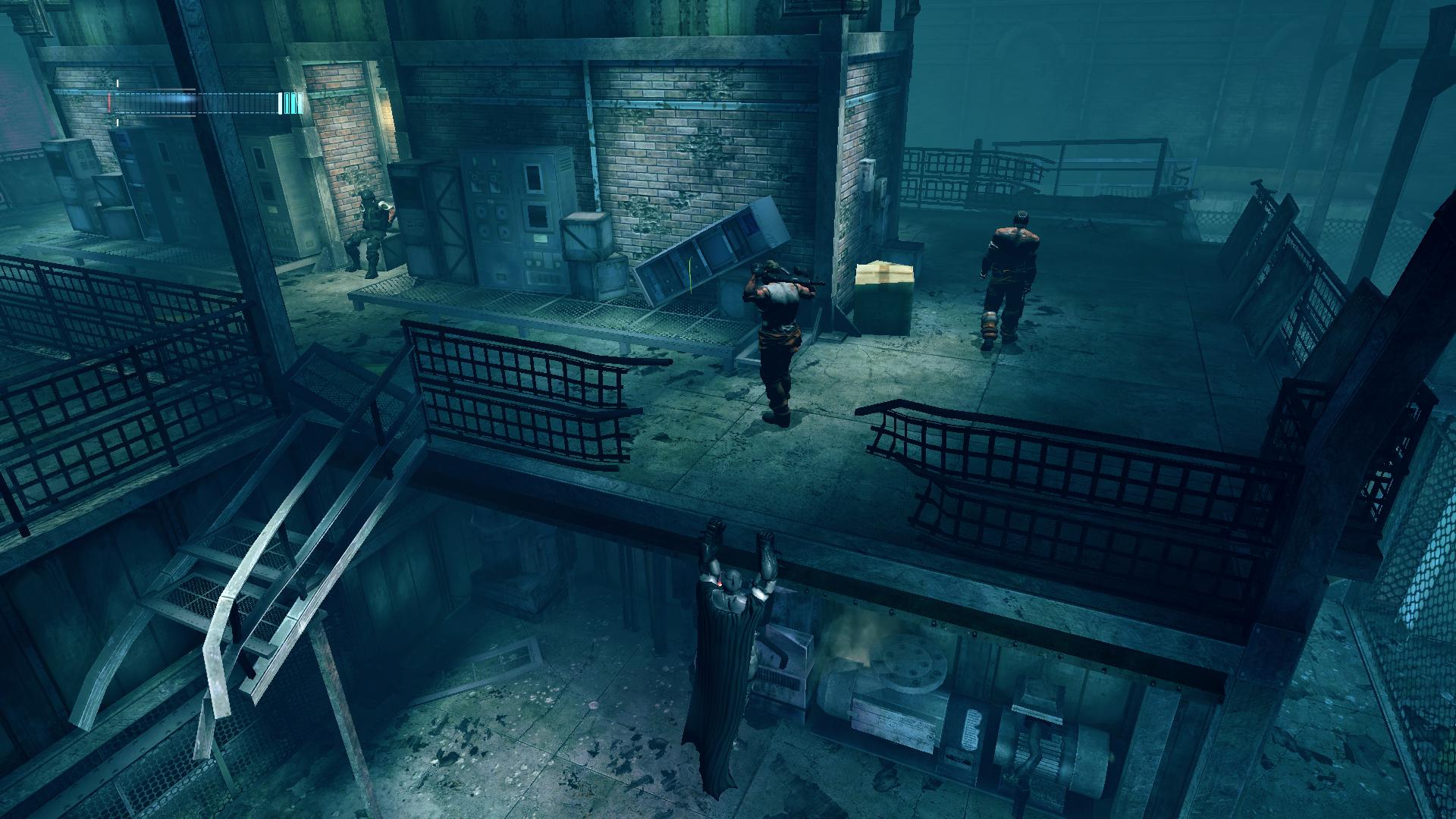 The setting itself is larger than ever, comprising the 3 islands of Gotham central, each with recognizable districts, designs and buildings of various shapes and sizes and depth. Travel is accomplished through Batman’s regular gadgetry, as well as the focal new feature of the game, the Batmobile. The Batmobile has two main forms, a driving, and a combat form. Both control smoothly and switching between them is quite simple and quick. Using it is very fun, but it can be felt that the game relies on the car very much, and an enormous amount of activities involve the car in some way, perhaps to the detriment of the game as a whole.

The remainder of gameplay is split into exploration, sneaking around, the use of gadgets, and combat. Combat is as enjoyable as ever with the FreeForm system that makes one feel so powerful while still being challenging, and the use of gadgets and clever ways to take down enemies keeps the feeling of being Batman quite well. The game is quite expansive, with a wide array of sidequests of complete, although personally I could have done without yet another array of about 250 Riddler trophies to collect.

Batman: Arkham Knight is in the end a very good game, and a very good sequel, although that was perhaps to be expected. It’s not without its flaws: it feels a little less “wow” then the series did a couple years back, and perhaps after this it’s time to move in a new direction. Other minor issues like the Batmobile and the sometimes inconsistent difficulty detract from it in small ways, but never so much that the game is ruined irredeemably. On PS4 the game plays wonderfully and has a rich level of graphical detail, but on PC the game is often unplayable, so anyone thinking of buying it there should wait until it has been properly patched before doing so.

If Arkham Knight was the first entry in the franchise, it would have been my Game of the Year without a doubt. As it is, it’s an extremely fun jaunt into the world of being Batman that should keep most people happy for a good many hours.

It has been six years since we first ventured into the world of Batman, in what was to become developer Rocksteady’s Arkham trilogy.

This may not have been the first time a player was put in the shoes of Batman, but it was the first game that really made you experience all the aspects of being Batman. Arkham asylum was seen by many as setting the benchmark for what licensed games could be. After the high standards set in place by Batman: Arkham Asylum and Batman: Arkham City, would Rocksteady be able to improve on what they have already achieved with Arkham Knight, their last game of the trilogy?

The game takes place a year after the events of Batman: Arkham City, as Gotham’s citizens find themselves in a time of relative peace. This is shattered when Scarecrow launches a biological terror attack on Gotham and threatens to unleash even more of his fear toxin into the city. This leads to mass evacuations. Seizing the opportunity, criminal gangs lead by some of Batman’s rogue’s gallery start looting the city. With most of the city empty, and only a hand full of police left to defend those that stayed behind, it’s up to Batman to stop the Scarecrow and his militia, led by the mysterious Arkham Knight.

The story kept me engaged through all its twists and turns. I especially appreciated the fact that the story gave some more insight into Batman’s psyche as well as focusing on his relationships and how they evolve throughout the story. The mystery behind the identity of the Arkham Knight is a bit of a letdown as it is quite easy for any Batman fan, and even most non-fans to figure out who he is before the big reveal.

This time around we are free to explore the three islands that makeup Gotham. Each of these has its own unique feel and atmosphere, as well as recognizable landmarks such as Wayne Tower and ACE Chemicals. Gotham looks amazing in all of its dark and gloomy glory and for an empty city feels strangely alive. The textures and moody lighting along with the constant rain makes Gotham a beautiful place to explore.

While I am on the subject of exploring, Batman now has two ways in which to traverse Gotham. Not only can you grapple and glide from the rooftops, but you can now also take to the streets in the brand new Batmobile. This is the biggest departure from the previous games, and one of the most polarizing aspects of the game for me.

It is a lot of fun driving the Batmobile and drifting around corners at high speeds. It really adds to the feeling of being Batman, and chasing down criminals in high-speed chases is entertaining, as every object in your way crumbles beneath the weight of the Batmobile. As with the rest of the game, the Batmobile looks really good, the way it moves and animates is spot on. The design takes its inspiration from both the old and new Batmobiles that have come before. There are some clever and interesting puzzles that require you to use the Batmobile to solve.

The Batmobile can also transform into a highly manoeuvrable tank, which enables Batman to take down the patrolling drones (both ground and air) which litter the streets of Gotham. At first, I found the Batmobile battles to be an entertaining distraction, which later turned into a frustrating endeavour, as these battles started to occur more readily. These were some of my most frustrating -throw my controller out the window- moments and really dampened the fun I was having. It is also one of the few moments that feel un-Batman in the game. There are also some awkward Batmobile platforming sections that just felt out of place.

These aren’t deal-breakers; I enjoyed the Batmobile as a method of quickly traversing Gotham, but as a vehicle of destruction it just feels awkwardly out of place.

When not driving or gliding around Gotham, Batman takes on the myriad of gangs that now inhabit the city. Combat is once again a blast and one of the most enjoyable aspects of the game. Batman’s new suit enables him to move quicker giving combat an even more fluid feel. As with the Batmobile, Batman is perfectly animated, every move and punch flows into the next effortlessly. Another great addition is that enemies now take notice of your strategies. Keep attacking them using the ground ducts, and they will throw grenades down them to flush you out, keep attacking from up high, and they will place mines on the surrounding vantage points. This adds a great new dynamic to predator battles and forces you to keep changing up your strategies.

Batman can also take on the new team-up side missions, which have you fighting side by side with the likes of Nightwing, Catwoman, and Robin. These are great fun, as these team-ups enable you to change who you control during fights as well as give you access to the splendid looking dual takedowns.

There are also quite a number of side quests to complete, these are great distractions and have you chasing down the likes of the Penguin, Two-face and the Riddler (yes, Riddler trophies are back). Each of these side quests has their own unique mechanics, for instance in the Two-Face quests, Batman has to stop his henchmen from robbing banks thereby putting a timed twist on the usual predator missions. The diversity in these side quests is a real welcome addition.

Batman: Arkham Knight is an outstanding game and a fitting end to Rocksteady’s trilogy. The game looks beautiful and adds some new mechanics to the already tried and tested formula. Some of these new mechanics work really well and some just fall a little short. It doesn’t quite reach the heights that its predecessors did, mainly due to the fact that the standard was set so high in the first place, but it still manages to deliver a brilliant looking and engaging experience.