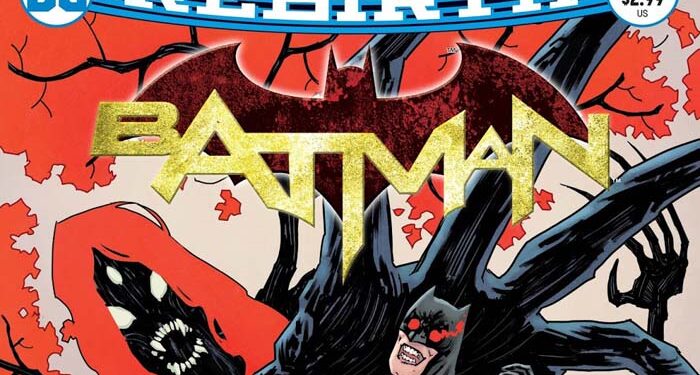 In part four of Night of the Monster Men, the weirdness and non-stop action resume as the Bat family continues to battle monsters in Gotham City. This time, however, the stakes are higher as two of their own, Gotham Girl and Nightwing, have turned into big, ugly politicians…I mean, monsters. Flipping through the pages, it’s immediately noticeable there’s been an improvement in the overall artwork. While I wasn’t a big fan of Batman #7’s style, this issue is a much-needed improvement with better definition and finishes. Kudos to Riley Rossmo for really stepping up on this book; I particularly enjoyed his character designs of Batman and Duke Thomas.

We’ve reached the critical conflict part of the story arc where Batman could potentially lose his two important people. Considering the events surrounding Gotham and Tim Drake, it’s no surprise that Batman refuses to accept defeat and fights for Gotham Girl and Nightwing. That said, unlike with Gotham and Tim Drake, I never felt like Claire and Dick were in any real danger of perishing. Let’s face it – DC does occasionally shock us with the odd death here and there, but killing off Dick Grayson would likely kill off an entire fan base. Batman’s refusal to give up on his team aside, there was another purpose to Batman #8: to establish Duke Thomas as a legitimate member of the team. When the chips were down and not even Batman had a solution, Duke came to the rescue, establishing himself as a vital member of the team and not just Alfred’s Batcave buddy. Duke has been given a major part in the Batman Rebirth, and it’ll be interesting to see where his character goes. Personally, I’d love to see DC pull a fast one and turn him into a mighty foe for Batman in the same way The Flash team did with August Heart/Godspeed.