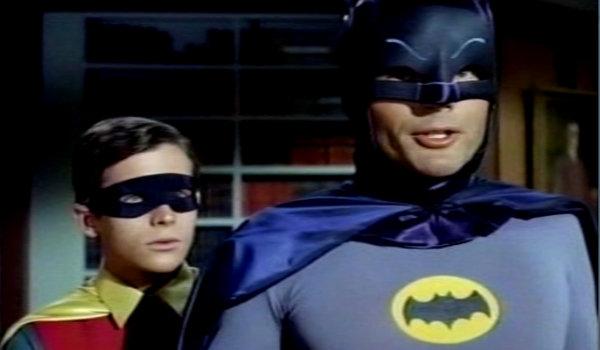 It’s the same bat-time and the same bat-channel, so let’s tune in and see what Bruce Wayne and his youthful ward Dick Grayson are up to in these episodes of the 1966 Batman TV show. This time around they’ll be taking on someone a little different: Zelda the Great. Wait, who’s that again? After the disappointment of the last two episodes, can our dynamic duo bounce back to top form with a little-known villain? It’s April 1st in Gotham City, and at the First National Bank at 8:37pm someone has just broken into the vault. The guard opens fire, but the mysterious robber survives and knocks him out cold. Later, Commissioner Gordon is struggling to figure out just what happened. The robber was wearing a bullet-proof vest, which is normal, but only $100 000 was stolen which isn’t. A call to Batman goes unanswered but the bat-signal gets the attention of a stargazing Bruce Wayne and Dick Grayson.

As Batman and Robin they arrive at police headquarters and are equally baffled as to why this happens every year, and why so little money was taken from the millions on offer. They come up with a ruse to let the public know that the stolen money was counterfeit, while Batman studies a bullet that was retrieved at the scene of the crime. The bullet has traces of 13 different layers of silk as well as ambergris, which is used in perfume, and they deduce that the criminal is a woman.

Meanwhile, beneath the Gnome Book Shop, lies the lair of Albanian genius and magician’s craftsman Eivol Ekdol. Eivol is meeting with Zelda the Great, one of the world’s greatest illusionists and escape artists who’s fallen on hard times. He complains that the money she stole to pay him is fake, and unless she steals more then she can’t have his latest invention: an escape-proof death-chamber for her to escape from. Zelda claims to hate the life of crime she’s become involved in, but has to rejuvenate her career somehow and needs the chamber to make it happen. Batman and Robin set a trap for the mysterious thief, hoping that she’ll steal a precious diamond that’s going on display. Zelda realises it’s a set-up though, and turns the tables by making the jewelry theft a decoy plan. She steals the stone but ditches it straight, leaving our heroes to scratch their heads. What they don’t know is that Zelda has different plans, and has kidnapped Dick Grayson’s kindly Aunt Harriet from Wayne Manor.

Batman and Robin are alerted by Comissioner Gordon, and Zelda the Great is demanding a ransom of $100 000 within one hour. Bruce Wayne has the cash, but because he’s busy being Batman he can’t be found to authorise the ransom money. What can the caped crusader do? As our heroes struggle to find a solution, we see Aunt Harriet caught up in one of Zelda the Great’s great escape routines. Suspended over a cauldron of flaming oil, Aunt Harriet flails futilely as Zelda relaxes with some knitting.

With just one hour on the clock, will Aunt Harriet survive? Can Bruce Wayne and Batman be in two places at once? Will Zelda the Great be the undoing of the dynamic duo? You just know this cliffhanger has to be resolved in part 2!

The second part features some moments of inspired genius, as Eivol Ekdol’s inescapable deathtrap comes into play and we see some touching moments from both heroes and villains in the conclusion. But how does it rate? After the Mister Freeze episodes, this may seem like a step down by not having a big-name villain, but it isn’t. Zelda the Great may not be Catwoman, but she’s a fascinating character and unlike anything shown in the series so far. She’s not really evil, just misguided and desperate. The creativity of putting Aunt Harriet in the cliffhanger instead of Batman and Robin is a far worse peril than those seen before, because she’s an innocent in the situation.

Seeing Batman and Robin doing forensic work in the Batcave is nice too, and Alfred’s talking about vacuuming is priceless. It’s clear that everyone is comfortable with their roles, and the script gives every character a moment to shine. Also it’s the first appearance in this series of the bat-signal, which makes a nice change from the bat-phone.

Oscar winner Anne Baxter plays Zelda with an amount of flair and emotion that makes this character work. She conveys how Zelda knows that what she’s doing is wrong, and you get a strangely sympathetic villain because of it. When the bat-cuffs go on you feel genuine empathy for her, and understand Batman’s reluctance at arresting her.

These episodes may not be obvious stand-outs for some of the best of the first season, and would probably be overlooked by many. But they’re fresh, fun to watch and highly enjoyable. If you’re missing them, you’re missing out.