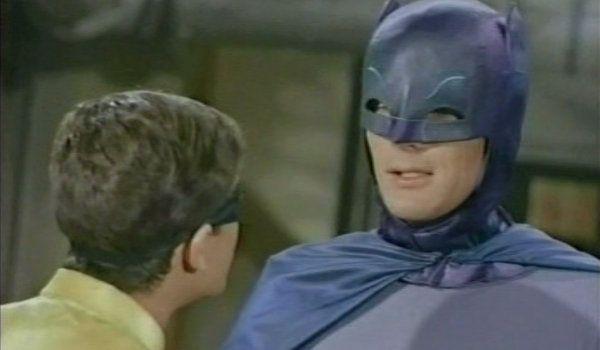 Holy heroic exploits! It’s Batman ’66 once again, and this time it’s up to our dynamic duo to take on a familiar chilly villain. So grab your capes, cowls and bat-popcorn, it could be a hot time in the cold town tonight… The Gotham City Ice Rink has just been melted by a kook with a flamethrower, and the crook makes his getaway in an ice cream van. A motorbike cop is in hot pursuit, but when the street gets covered with ice he skids out and loses his quarry. Comissioner Gordon and Chief O’Hara instantly know that this is the handiwork of that frosty felon Mister Freeze. They put in a call on the Bat-phone and it’s time for Bruce Wayne and Dick Grayson to leap into action as Batman and Robin.

While Batman is sympathetic to Mister Freeze’s motivation for revenge, he knows that it’s only a matter of time before Freeze sets his sights on other targets. In his lair, Freeze keeps things cold except for the heated area where his henchmen are dining. He’s hired five lookalikes of Batman and five of himself to get into fights around Gotham as decoys to trick the police, while also luring the real Batman into a trap. Back in the Batcave, Batman tests out his anti-freeze capsule but it proves ineffective against temperatures as low as those Mister Freeze may subject Robin and himself to. Things are already looking grim for our heroes, and the police are confused by the appearances of the fake Batmen spotted around Gotham. After mapping out their pattern, Batman learns that Freeze’s target is the Gotham City Diamond Exchange and the dynamic duo set off to foil his sub-zero scheme.

After a chaotic brawl with more Batmen and Freezes than make sense to the average Gothamite, our heroes have to return to the Batcave with Robin furious at their failure. He’s so angry that he misses the clue that Mister Freeze passed up on stealing a fortune in loose diamonds during the heist. Batman figures out Freeze’s plan though, and it involves the theft of something far bigger. Once again they race into action but arrive too late. As they attempt to give chase, Mister Freeze regrets that the only option open to him is to kill Batman and Robin, something he was hoping to savour at a later time. With a blast from his freeze gun he puts the heroes on ice, possibly for good. Can no-one save our noble pair of human popsicles? Find out in part 2, same bat-time, same bat-channel!

The second part sees Mister Freeze go on the offensive now that he’s got the loot, with his plan to exact a cold-hearted revenge on the caped crusader. It’s an episode full of baseball diamonds, kidnappings and baked Alaska, but will Mister Freeze get his just desserts?

Mister Freeze is one of the most sympathetic villains in Batman’s rogue’s gallery, but with the exception of the animated series and computer games, he hasn’t been done justice on screen. He’s a complex character with a tragic motivation, and sadly we’re once again let down. George Sanders may be a far better Mister Freeze than Arnold Schwarzenegger and gives a great performance, but his costume is little more than a bad spacesuit and he comes across as a crook with a silly gimmick.

It doesn’t help that he keeps describing helicopter trips as “zoom-zoom-zoom”. These two episodes are far from the best that this series has to offer, with some parts of it not making any sense at all even if you take this series lightly. The acting is good but the story and some of the effects are weak, while by the end Chief O’Hara’s incompetence isn’t even amusing. With the comedy being too forced to be funny, it cancels out any attempt at seriousness and it just seems hollow.

One of the better points though is the layout of Mister Freeze’s lair, with alternating warm and freezing zones that suit whoever is in them at the time. It’s one of the few genuine strokes of genius to these episodes, although it isn’t quite enough to make them good.

There’s a lot to recommend about the classic Batman ’66 series, but sadly these two episodes aren’t a part of that. They’re watchable, even enjoyable in some ways, but for the most part they feel drawn-out and dull. Sorry Batman, better luck next time.