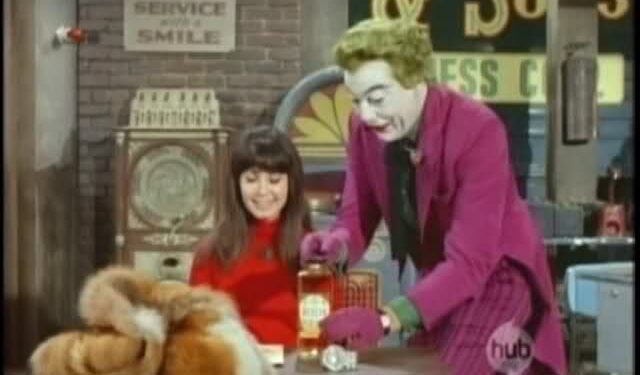 Say, why did the cross-eyed teacher lose her job? Because she couldn’t control her pupils.

Okay, so that’s a terrible joke but they’re the only ones I know. So you could listen to me crack bad gags for a while or you could settle in with the latest Batman ’66 episodes featuring the Joker causing trouble at Dick Grayson’s school. Which is it going to be? Yeah, I thought so too. So what’s it all about?

It’s a normal day at Woodrow Roosevelt High School in Gotham City. The cheerleaders are practising their cheers, the basketball team is getting ready for a big game and Dick Grayson is doing some weight-lifting. The cheerleaders decide to order some milk from the vending machines. Instead of milk, the machine starts pouring out silver dollars! Students flock to get their share of the riches, and across town Commissioner Gordon suspects the Joker. He puts a call in to Batman, saving Bruce Wayne from a meeting where he’s turning down an offer to run for mayor.

After changing, Batman visits police headquarters and learns that the Joker has been released from prison and has bought a novelty games and vending machine company. A call from the school comes through, and their latest problem is a candy bar machine handing out free stocks and bonds. Batman races to the school and is instantly mobbed by students hoping to see Robin. Batman tells them that they should be tending to their studies, much like the missing boy wonder. Batman presents a slide show to the student council – of which Dick Grayson is a member – and shows them what the Joker looks like so they can be on the lookout. However, the Joker steps out from behind the projector screen and makes quite the entrance. While he’s establishing an alibi for himself, across town a rigged jukebox helps his henchmen rob a bar. Batman wants to arrest the Joker but has no evidence and no charges that’ll stick, not even loitering on the schoolgrounds.

Later at the Joker’s hideout we see that he and his gang, the Bad Pennies, are building more lethal and devious vending machines. School cheerleader Sweet Susie is revealed to be the Joker’s inside girl, being paid off in jewellery, furs and perfumes to rig the vending machines for his criminal schemes. In this case the Joker will be using the milk machine to hand out exam answer sheets, so that he can blackmail the students.

At the batcave, Dick Grayson has changed into Robin and is keen to get into the fray and prove to the kids of his school that an easy life of crime just leads to trouble. He and Batman decide to stake out the school, but when they arrive Susie leads them into a trap. After being knocked out by gas from a vending machine, they wake up in the back of a moving van strapped into a pair of electric chairs hooked up to a slot machine. The Joker tells them that if the slot machine lands on three lemons, they’ll be electrocuted with 50 000 volts. Batman confesses he doesn’t gamble and believes the odds to be rigged, but the Joker swears it’s a fair game. He’s instantly proved to be a liar, as first one lemon is locked into place on the dials, then a second.

The third dial is spinning, and a third lemon will mean the end of the dynamic duo. Can they escape? Are they in for a shocking ending? Is their future going to be sour? The answers will be revealed in the second part of this story, at the same bat-time on the same bat-channel!

The second part of this story has one of the weakest conclusions to a cliffhanger in this series, but despite that it’s also one of the funniest and a great chance for Burt Ward to shine as both Dick Grayson and Robin. These two episodes are incredibly light and – as the Joker puts it – whimsical. They’re silly, something reflected in the names of the high schools Woodrow Roosevelt and Disko Tech. If you’re worried they’re too silly though and lacking in value, then don’t be. There are some moments of sheer genius, like the projection screen entrance, and hearing Cesar Romero utter the line “Hello kiddies, meet the Joker” will sound instantly familiar to anyone who remembers the animated show with Mark Hamill’s voicework. The “stay in school, don’t become criminals and don’t smoke” message is obvious but well-intentioned without being too patronising.

Again, Romero as the Joker dominates every scene that he’s in and seems more comfortable than he was with it earlier in the season. He also seems freakishly tall, and has a playful cruel streak that oozes Joker insincerity. Batman may have more to do than Robin here, but it’s Robin who gets to shine. It’s good to see his Dick Grayson persona on campus where he’s clearly someone other students look up to, as opposed to scenes with Bruce Wayne where he’s sometimes lectured. When Batman arrives at the school and the kids race out not to see him or the batmobile, but to catch a glimpse of Robin, is a nice touch that speaks of his popularity.

These are two very good episodes even if the mood may be too light for some and the story somewhat thin. The performances shine through and they’re enjoyable viewing that will probably have you coming back for repeated viewings. Give them a whirl!