Batgirl and the Birds of Prey #9 Review – Just When I Think I’m Out, They Pull Me Back In 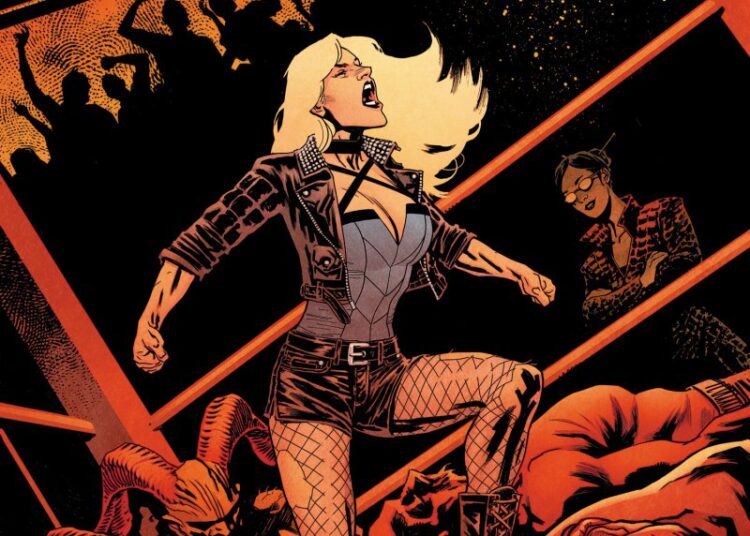 Just when I think I’m out, they pull me back in. Mirroring Michael Corleone’s woes at being dragged back into the criminal underworld, that quote fro, The Godfather III also became a symbol for just how bad the film was. After two brilliant films preceding it, the third was a stinker which dragged down fans, critics and the legacy of the brilliance which had gone before.

Now, through lousy timing and poor luck of the draw, I’m pulled back into reviewing another issue of Batgirl and the Birds of Prey. Like the Godfather films, Batgirl and the Birds of Prey is a series with a strong lineage of quality. Sadly, like Godfather III, its latest incarnation has become a disgrace to what went on before. Still, after a break and with lower expectations this time around, I was willing to see if it’s improved, which meant I also had to read issue #8 for the first part of this storyline.

Working undercover, Black Canary infiltrates a metahuman fight club so that she can be recruited by the mysterious Blackbird. Blackbird is running a school for troubled metas, who she then drains of their powers…

The concept behind this of a villain exploiting her wards in this way is like Oliver Twist’s Fagin mixed with Parasite from Superman. There’s nothing wrong with that. However, it’s the execution of it which leaves a huge amount to be desired. The plot is so full of holes that you’d swear it was written with an excavator, not a word processor. In turn, the dialogue is shoddy while the characters are painfully one-dimensional.

Blackbird is the sort of dull villain whose sole purpose is to be evil. Roulette, who’s providing the metas for her, is a gullible moron who doesn’t seem to mind losing her most valuable business assets in exchange for a couple of grand – a huge blow given how she used to be written as an intelligent, calculating businesswoman. Meanwhile, any semblance of Black Canary being a capable heroine is gone, as she’s presented like a wide-eyed innocent who can’t put two and two together.

This is the sort of writing which induces headaches. The Black Canary’s undercover disguise is… her usual costume, but with a name change which means, um, a black songbird?! BC believes an army is being assembled comprised of, um, three kids?! Blackbird trains BC to improve her powers, despite knowing her betrayal is inevitable?! There are more problems here, so many more, but be smart and avoid buying Batgirl and the Birds of Prey #9 so you don’t have to read them. It’s a waste of time and money.

In fact, to quote a typo from the previous issue, that’s the operative “world” here: waste. Because of poor writing, the legacy of this series is being wasted. Now, I want out… and I don’t want to be pulled back in ever again.