Batgirl And The Birds of Prey #6 Review – A Complete Failure 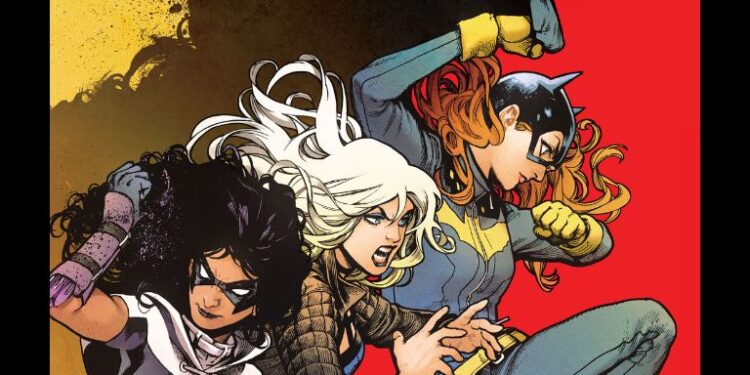 Congratulations, Team B-BoP! You just lost me completely as a reader. I’d rather read nothing than see this series continue to be butchered, so farewell from me. But before I go, one last review… Batgirl And The Birds of Prey #6. Batgirl And The Birds of Prey #6 is the conclusion to the sub-plot which clumsily took over from the main story arc when that proved to be a dud. The Huntress, upon learning that her mother is alive and has become a mob boss, seeks revenge answers… whatever. Black Canary and Batgirl join her for the big climactic fight, at the place where Bruce Wayne saw his parents killed. No, not Crime Alley, but the legendary Majestic Theater.

The… Majestic… Theater. Okay. Sorry, New 52. You can say it, but to me it’ll always be the Monarch.

Anyway, prepare for a fight scene of stupidity and boredom. Watch as mobsters join forces with the Birds of Prey for no reason! Thrill as everyone who wields a gun suddenly seems incapable of using it! Gasp as Commissioner Gordon does nothing! Shudder as you realise that Gotham cinemas have aisles wider than a freeway! Of course, it all ends with the inevitable moment of the Huntress confronting her mother and learning that her villainous plan was… The art here, while fair at times, is so unfocused that backgrounds usually play no part. When they do appear they’re wrong, and the scenes play out poorly. There’s also a laughably bad moment at the end where Batgirl is suddenly replaced by Black Canary in a panel. However, even mistakes like that are nothing when compared to the inept writing on display.

Clearly the Bensons are in dire need of attending a DC writers workshop to help them hone their craft, since the mistakes range from basic ones to outright whoppers. From Huntress’s mother being locked in a projection booth we never saw her enter (made stranger by her mother blocking the door from her side too) to the slipshod plotting, nothing works. Let’s look at the villain’s plan, for example. Huntress’s mom, having faked her death, swears revenge on her ex and becomes a powerful mob boss. Does she then order a hit on the ex? No. She repeatedly sends assassins to capture him and then goes out of her way to keep him alive. Finally she asks her daughter (who she didn’t know was alive too) to kill him for her. Uh… Don’t worry. They have him arrested for murder, despite a lack of evidence. Plus they have Huntress’s mom arrested too, because, like, she’s evil now. As for the new Oracle, despite being an accomplice in multiple criminal acts, he’s allowed to stay on as the new Oracle. Why? Because he promised he’ll be good from now on.

This could have been a great action/adventure detective thriller, offering an intelligent mystery and touching dialogue which made the characters believable. Instead it’s as shallow as a teaspoon and half as smart.

Batgirl And The Birds of Prey #6 is bad, and the cumulative effect of this series is worse. Which is sad, since this series should be good and used to be good. It may have been created with the best of intentions, but the handling of it is so inept that just reading it hurts. It’s a pathetic finale to a dismal story, and there’s nothing about it which can be recommended.