Batgirl And The Birds Of Prey #13 Review – Not Bad 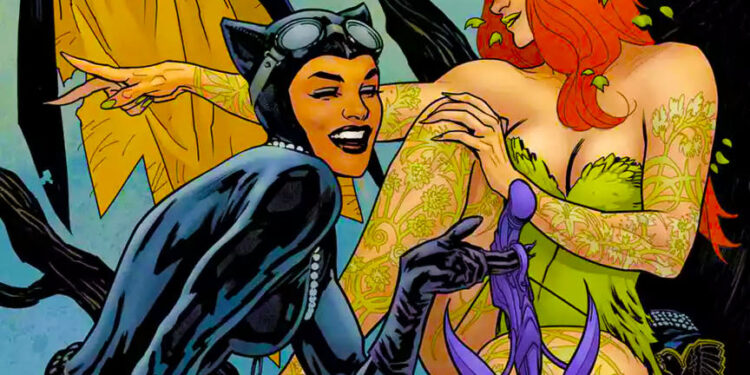 For all its faults, and there are many of them, this isn’t a bad issue of Batgirl And The Birds Of Prey.

Poison Ivy has captured Huntress, Black Canary, the Calculator’s wife and children, and Benedict, the evil corporate boss of Terracare. It’s up to Batgirl, Catwoman, the Calculator and Gus – the new Oracle – to stop her, before she kills Benedict. But what could have caused Poison Ivy to do such a thing, and can the Birds of Prey convince her that violence isn’t the solution? And when the Calculator learns the truth about why his loved ones were kidnapped, what will he do? That doesn’t make Batgirl And The Birds Of Prey #13 a good issue, but at least it doesn’t go crashing into the already low bar this series has set for itself. The art helps to keep the story moving at a solid pace, and the writing is… well, the writing is what it is, but at least there’s a bright spot here and there which make it not entirely unbearable. So, by its own really low standards, it’s a win.

If, however, you’re hoping for a top-quality tale then you’re reading the wrong comic book. The plot holes keep getting bigger by the issue, there’s a clear lack of understanding about who the characters are, and there are some gaffes in the art, like a character suddenly having the wrong hair colour. Also, does Poison Ivy have tattoos, or are the spirals on her arms and legs a part of the costume – and if so, why are they there for half the book and then absent from the other half (a difference shown in both covers too)?

Maybe the editorial team have been on vacation and just didn’t notice? Much like they haven’t noticed any of the other problems plaguing this series since its debut. Wow. That must be some vacation they’re on. It’s almost like they don’t care at all. Once again, character motivations make little sense and nobody even pretends to care about their secret identities anymore. Poison Ivy gets a whole new set of powers, now being able to control bees… which she seems able to do even before she gets that power. Murderers get away with murder (as long as they’re friends of Batgirl And The Birds Of Prey), while evil Benedict is locked away forever without any questions being asked and everything works out perfectly, in the end, because… why, again? Oh yes. Writing. Bad, bad, bad, bad writing.

The only serious positive this issue gives readers is that the pathetic character of Gus goes away, hopefully, to never return. I’d like to cheer at that because it also means that Barbara Gordon has reclaimed the role of Oracle, but I can’t. This creative team have proven themselves incapable of doing justice to any of these characters, and I’m dreading them ruining the legacy of Oracle even more than Gus already did.

Like I said, this isn’t a bad issue of Batgirl And The Birds Of Prey, especially if you’re after an easy read which doesn’t tax your brain in any way. Just don’t think for a second that this is good. It isn’t.