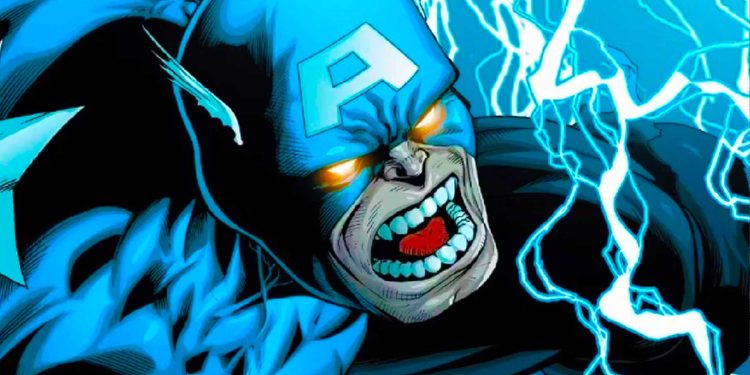 The new issue of the comic Avengers Forever #7 is currently available from Marvel Comics and introduces a Captain America variant that is part Wolverine and part classic Daredevil villain. His name? Weapon America.

Avengers Forever #7 was created by Jason Aaron, Aaron Kuder, Cam Smith, Guru-eFX and Letterer VC’s Cory Petit and features a new variant of Captain America that is part Wolverine and part Nuke. This new variant is not the only variant featured, as it sees several other Steve Rogers. The first four that are the focus of the first many pages and “days” of the comic are a comic artist Steve, an anti-establishment figure Steve, a shy homebody Steve, and a dog Steve. These four variants wake up inside a facility with no memory of how they got there.

The four keep trying, and unfortunately failing, to escape the facility day in and day out. On the twentieth day, a fifth variant steps out of his cell and gruffly introduces himself as a variant of Steve Rogers who is part Wolverine and part Nuke. He introduces himself with the name ‘Weapon America’.

Weapon America manages to help the other four variants escape, and once they are out of the facility they come across even more variants, such as a werewolf Steve, a gorilla Steve and a Knight Steve. There seems to be a need for all the variants of Captain America as Knight Steve tells the others “It only gets harder from here. Because there’s a war to fight. And we need every Steve Rogers we can get.”

Wolverine is a long-time X-Men character who first appeared in a cameo in 1974 The Incredible Hulk #180 before making a full appearance in the following issue. Created by Roy Thomas, Len Wein and John Romita Sr., Wolverine has three retractable Adamantium claws (that cover his original bone claws) on each hand. These claws were forcefully given to him by the Weapon X program. He also has additional powers such as healing capabilities and increased strength.

Nuke, also known as Frank Simpson, first appeared in 1986 Daredevil #232 and was a long-standing foe to Daredevil. Created by Frank Miller and David Mazzucchelli, Nuke’s origins are also connected to the Weapon X program, as he was a test subject of the Weapon Plus program.

Weapon America, the new Captain America variant, sports both Wolverine’s Adamantium claws as well as the facial tattoo of the American flag which Nuke is famously known to brandish.

If gamma radiation sounds familiar it is because Bruce Banner was turned into Hulk because of gamma radiation, suggesting that the next variant will be a Hulk Captain America.

Are you excited to see the new Captain America variant, Weapon America, in Avengers Forever #7?