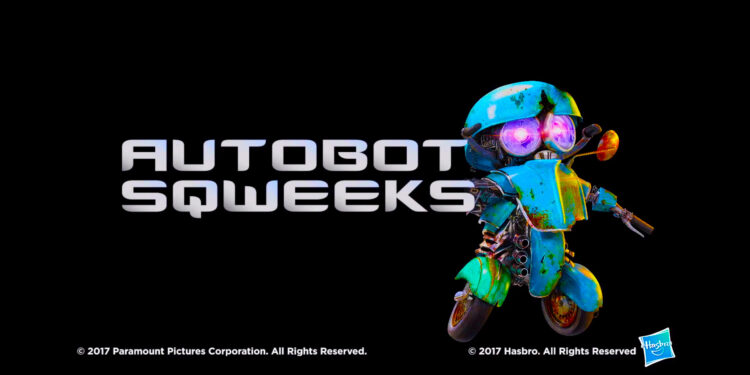 Regardless of your opinion of Transformers: The Last Knight, you cannot deny how adorable Sqweeks, the newest Autobot, was in the film. Now, Hasbro has gone and made it possible for you to adopt this blue tyke and make him the newest member of your family. Yes, you can bring Sqweeks home! First up, the little guy comes with a detachable blaster and remote control. You’ll need 6AA batteries – which aren’t included – to fire him up. The control takes two batteries, while the actual unit requires four. Fortunately for your pocket, though, the batteries last a while, so you won’t need to get another home loan to sustain your latest Autobot.

Sqweeks comes with three modes. The first is the basic robot mode (his eyes remain blue in this setting), where you can move him back and forth, left and right, and get him to speak (of course he says “Chihuahua” a lot). The second is the dance mode, and this is where he’s at his most entertaining. If you leave him inactive for three minutes or you spin the unit around via the remote control, he’ll dance to his own music. Seeing him bust a move never gets old and you’ll find yourself making him dance more than anything else. The final setting is blaster mode. When you clip his blaster in, his eyes go red and he turns into a lethal machine, which is pretty amusing.

The look of the Autobot is spot-on and almost identical to the version from the film – minus the rust and oil spills. You do need to be careful with his helmet, however, as it is quite a flimsy part, and I wouldn’t recommend tugging on his arms, either. That said, the durability of the unit is impressive, and it won’t fall apart if you bash it into a few walls or cupboards. In terms of the sounds, Sqweeks stays true to his on-screen version as well. All the beeps and quirks are there, and his dance soundtrack is endearing; however, I must say that the sounds that accompany his every movement are a tad annoying and too all-pervading. This could’ve been toned down for the sake of sanity.

Not since the Toby Robot has a remote-controlled robot warmed my heart like Sqweeks has. He’s a barrel of laughs and good times, and deserves a home, too.