Most films can be categorised into three main acts: the setup, confrontation and resolution. With female-centric spy thriller Atomic Blonde it’s very clear where each of these acts start and end. Remarkably, each section feels different from the previous, with different artistic approaches, camera angles, and even music variation. You don’t have to be a movie buff to see how each of these acts unfold in the long run, but the level of engagement throughout each is something that catches your attention.

The fierce Charlize Theron plays icy British MI6 agent Lorraine Broughton, the crown jewel of Her Majesty’s Secret Intelligence Service, who is dispatched to Berlin to take down a ruthless espionage ring and retrieve stolen intelligence after an undercover mole is murdered. She is paired with Berlin station chief David Percival (James McAvoy) and becomes the target of the usual shadowy KGB characters and, of course, femme fatale Delphine Lasalle (Sofia Boutella).

The action-less first act pretty much sets up the standard story, along with the clichés and corny dialogue you’d expect from an 80s and 90s action film. While all this is going on, however, Atomic Blonde lays the foundation for the obvious “all is not what it seems” approach, but hides it under mind-numbing tedium. It’s hard to tell if this is just poorly executed direction or an oversight, or whether it was meant to throw you off any hint of what’s to come. Surprisingly, in hindsight, it makes for a great setup for what’s to come.

The mood very quickly changes during the second act. Kicked off by a really intense action sequence and heightened by single shot filming, the camera moves along with our bone-crunching and ass-kicking female protagonist through a building, up an elevator, around a fight scene, up and down the stairs, onto the streets, and finally into a wheel-spinning car chase sequence. And this is where most people will probably sit up and take notice. During this engrossing seven-minute set piece, you uncover the first twist in the film, changing the dynamic of each character. This is hinted at by an earlier dialogue before the mission began. No one can be trusted. However, it’s the final act that really takes things up a notch. Atomic Blonde is filled with plenty of subplots, which create more twists than a French braid. Every time you think the film is about to end, it only deepens, before eventually smacking you across the face with an almost playful “gotcha” approach.

Besides all the glorious action, which includes countless gun battles and hand-to-hand skirmishes, another big drawcard for the high-stakes, rapid-fire spy story is its wink to the past. Its use of 80s music (like David Bowie and Queen’s classic ‘Under Pressure’) and also references to 80s film only make it that more entertaining. It’s style over substance, yes – but it’s style that works.

Atomic Blonde is definitely worth the watch, even more so in IMAX. While it isn’t filled with much of your typical big-budget background CGI to lure you in, the neon lights and scenic shots are definitely a treat. Screening only in 2D, the bright lights of the candescent neon is only made more spectacular without the darkening of your 3D glasses. 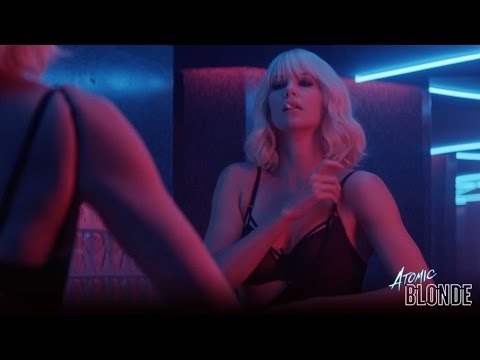