by  Staff Writer
in Gaming, Internet There’s a Google Search Easter egg that has flown over the heads of millions of internet users for years now. If you’re the type of user that enjoys finding fun little Google Easter eggs, you’ll be interested in this extra special one involving Atari’s Breakout. 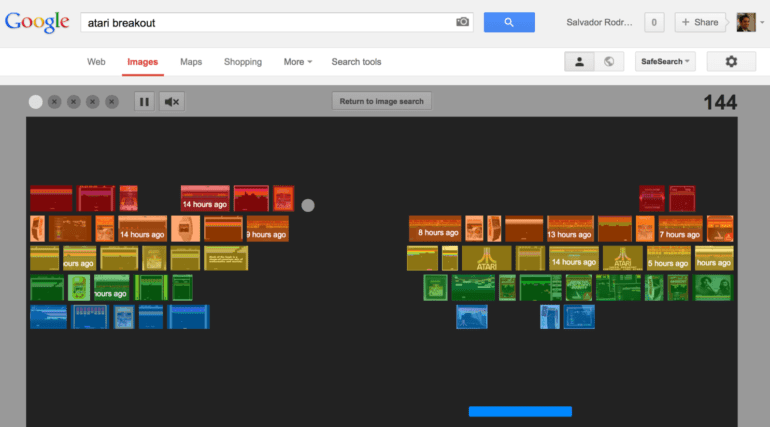 A Retro Throwback To Yesteryear

If you grew up during the years of Atari games as the norm, you may remember Breakout. This title may not be much in the current gaming clime but, when it first launched, it was quite the star. Designed by Apple co-founder, Steve Wozniak, Breakout was a hit when it first launched in 1976.

Atari Breakout is arguably only second to Pong, the Atari title that preceded it and served as an influence to Breakout’s gameplay.

The game became a solid commercial success with its sales skyrocketing enough to be the Atari console’s best-selling VCS. The game has endured its popularity for over 40 years since its release. Various clones have popped up over the years such as Nintendo’s Alleyway, Namco’s Quester and the endless list of mobile games that replicate it.

To honour Breakout on the 37th anniversary of its release back in 2013, Google decided to implement this awesome Easter egg. This version is a direct inspiration of the classic game with some Google-themed aesthetics added — precisely the colour palette featuring Google’s classic blue, red, yellow and green.

In this version, you can control the paddle with your keyboard or mouse. You get five lives for your attempt to generate the highest score you can achieve by breaking as many blocks as you can.

Like most Google Easter eggs, this one can also be found through a simple search for the correct term, however, there’s a slight variation you need to remember. To play this Breakout, you’ll need to type in the term ‘Atari Breakout’ in your Search bar on Google.com. If you press the normal search, you’ll only get access to regular search results and resources related to the title.

The correct way to find it is by typing ‘Atari Breakout’ in the search bar and clicking on ‘I’m Feeling Lucky’. Once you’ve opened it up, it will load up a Google image search results page with various screenshots of breakout. Don’t panic if it takes a second or two, just watch as the results page morphs into bricks.

There you have it! Enjoy your attempt to set a high score. If you look towards the address bar, you’ll also notice that it doesn’t say ‘google.com’, but rather ‘elgoog.im’.

If you’re on mobile, don’t count yourself out just yet. You can still experience this Easter egg with slightly different steps required. Simply open your phone’s web browser, head over to Google and do a regular search for ‘Atari Breakout’ and tap the link from elgoog.im. This should load the game up instantly for you to enjoy.

Although some of the charm is lost in the mobile version, you’ll still get to enjoy an instant gaming experience from your browser.

Tell us, have you tried Google’s Atari Breakout Easter egg?