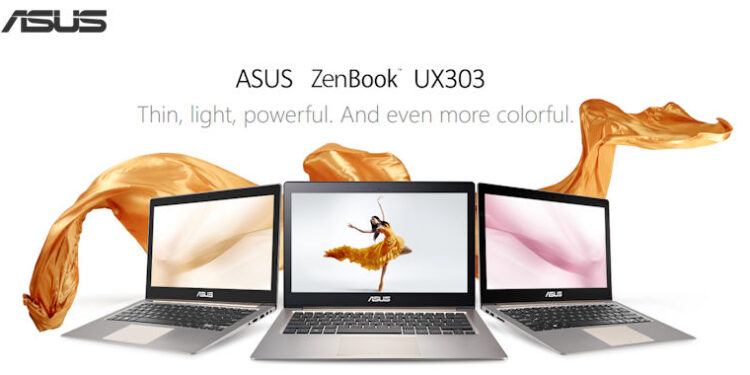 Ultra-portable laptops, or Ultrabook, has been the pinnacle of mobile computing for many years, and the envy of all who don’t offer any products in this category. Asus’ ZenBook range has been one of the standout Ultrabooks in the market, and has been for some years now. Within the company’s ZenBook range there are variants to suit almost all requirements and, perhaps, pockets. Late last year, Asus launched their latest range of Ultrabooks to the market, which was released to the South African market a few weeks ago. One of those within the range is the ZenBook UX303UA, a 13″ Ultrabook that packs quite a punch. If there’s one requirement of Ultrabooks over normal laptops is that it should always look and feel premium. The Asus UX303UA is no different. It looks sleek, is extremely thin and has great build quality. In terms of the design, however, it doesn’t set the world alight. Personally, I feel the minimalistic look has a lot more appeal, as I feel over the top design tends toward the tacky and less classy. The large Asus logo in the middle of the aluminium cover, which has a brushed metal finish. There are three colour variants to choose from, Icicle Gold, Rose Gold and Smoky Brown. I received the Smoky Brown variant, which looks a lot more silver than the name suggests, although there are slight tints of brown that do come through.

In terms of its interfaces, the UX303UA has x3 USB3.0 ports (x1 on the right, x2 on the right), x1 HDMI port, mini-DisplayPort, 3.5mm audio jack, SD card slot, and the power socket. There are no lightning or USB3.1 ports fitted to the unit, making it slightly less future proof. Interestingly, during charging, the indicator LED lights up next to the audio jack, and also has the HDMI, USB and DP ports in between the power socket and the indicator. Another strange positioning is its power button, which is added as another key on the keyboard, right next to the Delete button. This took some getting used to, as most other keyboard layouts for laptops have the Delete button on the top right hand corner, which has now been shifted one key inward. I can imagine a few instances where owners may continuously hit the power button and put their devices to sleep while editing text.

The metallic finish continues to the inside of the device once the lid is lifted. The lid itself is fairly thin, but has a rather large bezel around the screen. It may seem insignificant, but the bezel plays an important role in establishing a high-quality, premium design. Browsing through the different colour variants, the Smoky Brown is the only one with a glossy black bezel, which minimises the negative impact somewhat. The Icicle Gold and Rose Gold versions have their colour schemes continue through to the bezel, making it feel a lot more pronounced.

The speakers are fitted to between the keyboard and the hinge, hiding in plain sight. The trackpad feels smooth to touch and scroll, and is one of the nicer ones I’ve used on any laptop. The keyboard is backlight and has a softer keystroke, making it a lot quieter in the process. The overall build quality is very good and near flawless. There are no squeaks and rattles, not even when shaken. The screen also doesn’t have any kinks when pressed firmly between your fingers, thanks to its thin metal finish. The all-metal build does, however, weigh the unit down a tad at 1.45KG. Asus own ZenBook UX305 weighs just 1.2KG, one of the lighter Ultrabooks on the market. The unit also measures 19mm in thickness, which isn’t bad in itself, but some 2-3mm thicker than some of the thinner variants on the market. Again, the UX305 takes some shine off the UX303UA, with its incredible 12.3mm at its thickest point.

As with the many CPU and storage configurations to choose from, there are also two variants of the screen fitted to the UX303UA, one being a standard IPS panel screen, and the other an IPS panel touchscreen. Both of the configurations have a 1920x1080px resolution display. Compared to last year’s UX303UA, which had a 1600x900px resolution, it is quite a noticeable improvement. Another notable change is the change from a glossy panel to something a lot less shiny, although not full matte. This makes for better viewing during the day, and also has improved visibility from wider angles. With the focus of touchscreen devices from Windows 8, using touchscreen on Windows 10 was quite easy. Scrolling, swiping, pinch-to-zoom, and many other gestures were easily detected and carried out. I typically don’t use touchscreens, as most of my work requires more accurate selections for editing images.

The IPS panel also brings a lot brighter and vivid colours that are more accurate as well. The screen has a 1035:1 contrast ratio, and brightness of 333.4cd/m2, with a 90% sRGB colour gamut. The only aspect that may need a touch more attention are the darker colours, with blacks not being as deep as it could be, and some greys a little washed between specific levels. There was no backlight bleed to speak of either, which is a huge positive.

The configuration I received of the UX303UA sported an Intel Skylake Core i7 6500U 2.5GHz CPU with integrated Intel HD Graphics 520, 8GB RAM (4GB onboard, 4GB DIMM), and 1TB HDD, running on a 64-bit version of Windows 10. Note, though, that there are versions with different sized SSDs and RAM, which would have made the unit we received quite a lot faster. Be that as it may, the overall performance remained solid. Using normal Windows scrolling, animations and the likes, there was no lag or jitter at all. Third party software also ran smoothly, without any issues or concerns. The only aspect worth noting is gaming capability, but the UX303UA was designed more for the power user on the go, as opposed to any type of gamer. That said, a few low-level games worked well enough not to completely right it off. Many of the performance benchmarks indicate that the UX303UA outperformed quite a few of its competitors with the same configuration, even with the same Skylake chipset.

Asus has fitted a non-removable, 3Cells 50Wh polymer battery, sealed within the casing. The company claims an runtime of around 7 hours between charges, which actually holds up during testing, although, with a few tweaks here and there. Because of some of the bloatware, there are quite a number of background activities running, which aren’t necessarily required. I quickly disabled these activities from startup, which decreased boot-up time as well as reduce battery drain. At the same time, the device runs very cool, even cold. Thanks to the full metal body, the unit remains extremely cold, which takes some getting used to at first, especially in the middle of winter.

The Asus ZenBook UX303UA has a lot to offer the user, most importantly in terms of its performance. While the design is minimalistic and elegant, there are aspects that need redesigning, such as the large bezel and oddly positioned keys and notification lights. As for the performance, the Core i7 makes for impressive results, which even filters down to the battery.

The UX303UA is not the ultimate Ultrabook, but it is reliable and powerful enough. At a cost of R19,999, the unit doesn’t come cheap, but isn’t overpriced either. Compared to last year’s version of the UX303UA, it is a lot more powerful, has a longer lasting battery, and better display, all of which are very good reasons to upgrade.