A few short years ago, Ultrabooks were all the hype. With new hardware, technology made it possible to reduce the size and weight of the standard laptops of the day, making it the envy of any non-Ultrabook user.

That said, for most consumers, pricing hasn’t always been sensitive to their pockets. Some 4-5 years since the first wave of Ultrabooks, pricing has improved since, making it a lot more attainable. At the same time, specs and portability have also been enhanced since, featuring the best of both worlds.

One of the mainstays of the Ultrabook range has been the ASUS ZenBook, with a variety of units within the range, updating almost annually.

A few weeks ago, ASUS launched the new ZenBook range, including the ASUS ZenBook 14 UX425, which we received for review. 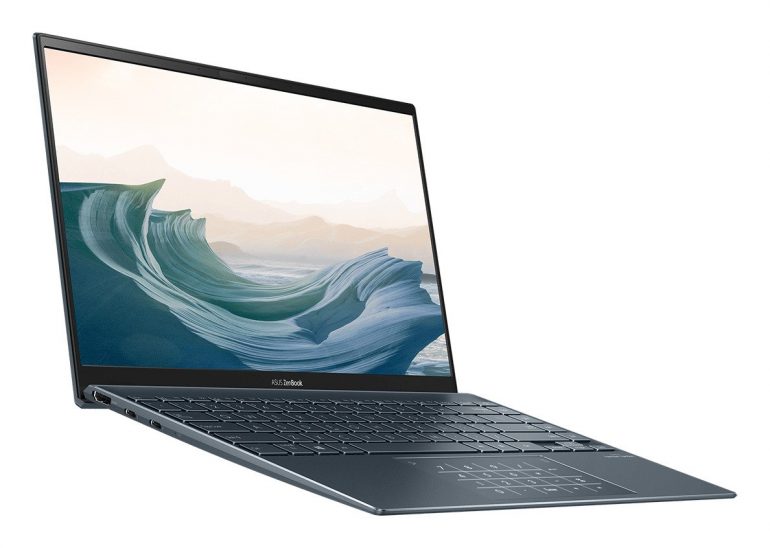 The ZenBook 14 features a lightweight body and small frame, synonymous for the Ultrabook genre. The unit is crafted from diamond-cut aluminium frame, with the classic ASUS logo carved out on the lid. The premium quality of the unit isn’t just reserved for the lid, with thing bezeled edges around the screen and matter interior also adding to the aesthetic. It’s not the lightest when it comes to the best for Ultrabooks, but at 1.17KG it’s still lighter than the MacBook Air.

Back to the lid, it features ASUS’ ErgoLift hinge, which not only allows for an increased angle on the lid when open, but slightly lifts the base so it doesn’t lie flush on any surface. This makes for better airflow through the vents beneath the laptop to keep cooling at a maximum for the fanless design. The design on the UX425 means that the hot air isn’t blown down onto the surface, or our lap, but up towards bottom of the screen. The material used allows it to withstand the heat, so it’s not warm to the touch even after numerous hours of use, so as to affect your productivity.

In addition to the sleek design and ergonomics of its cooling, the materials used along with the build give it a MIL-STD-810G certification. This military standard means that the unit can operate at higher than your average temperatures, increased humidity, as well as withstand a few knocks and drops.

In terms of connectivity, the ZenBook 14 features a mix of ports and capabilities. This includes a full HDMI 2.0b port, x1 USB 3.2 Type-A, x2 Thunderbolt 3 and DC power input. In addition to this, it also includes an IR web camera, Harman/Kardon integrated sound, Wireless 6 (Intel AX201), Bluetooth 5.0.

The ASUS ZenBook 14 is fairly small and fits a neatly-sized 14″ full HD, anti-glare screen. It has an IPS panel, with a matte finish, with no touchscreen support. As mentioned, previously, the unit has a very narrow bezel, roughly 1.5mm thanks to the ASUS NanoEdge design. The bezels are so small, the screen-to-body ratio is measured at 90%, which is very impressive. The anti-glare support is provided by means of a matte coating on the screen’s surface.

In terms of the display, it has a 1920x1080p resolution, the standard for most laptops these days. The colour reproduction is also very good, while also measuring close to 100% sRGB colour coverage, and 66.6% AdobeRGB. The contrast is also good with images looking crisp and clear.

Screen brightness is said to be around 400nits, but measures around 350nits on power. There is a slight light bleeding on the bottom left-hand side of the screen, but nothing to worry about when compared overall.

As with quite a number of modern ASUS laptops, the touchpad doubles as Numpad, complete with the basic mathematical keys for convenience. What’s cool is that users can still continue to use the touchpad as normal without accidentally pressing any of the numbers, as it can pick up the difference in gestures.

Even more convenient is the second shortcut within the touchpad, that of the calculator shortcut. Swiping in from the top-left towards the centre and it quickly opens up the Windows calculator app. Swiping in the opposite direction then hides it again. Pretty nifty stuff.

The touchpad has a single-press use. By default, or at least when I received the review unit, this means that all clicks across the touchpad react as the standard left-button click of the mouse. In order to get the right-button click, I had to use a two-finger tap. It’s a bit awkward to begin with, but I kept the setting as is to try make the most of it. There are no added benefits I can think of, other than perhaps to avoid any accidental right-button clicks.

The keyboard itself is fairly standard, with spacing well-suited to the layout even with its smaller frame. The keys themselves are backlit chiclet keys. The right-hand side shift, enter and backspace keys are quite large for a laptop, with sufficient space left for a row of buttons, which include the home, end, page up and page down buttons.

ASUS has always offered the latest in hardware when it comes to its ZenBook range. The UX425 is no different, having updated its specifications to the latest 2020 standards. To start off with, the unit features an Intel Core i7 10th-gen 1065G7 1.5Ghz (up to 3.9GHz) CPU, which includes the integrated Intel® Iris™ Plus Graphics. Along with this is 16GB LPDDR4X RAM and 1TB M.2 NVMe SSD, running on Windows 10 Home 64 bit.

When it comes to CPU performance, the ASUS ZenBook 14 performs very well in terms of the benchmark scores. However, due to the internal configuration – with the battery taking up most of the space – the CPU, GPU and RAM are packed quite close together, with the close proximity meaning temperatures can quickly escalate. That said, ASUS has built-in some safeguards for this, to allow the unit to operate at optimum temperatures, but sacrifices some performance power. Be that as it may, there are very little instances where CPU peaks will be sustained for long periods of time while in use, unless there is a specific reason to. Overall performance, though, is very good, even with benchmark scores that decrease over time.

When it comes to battery life, the 67WHrs, 4S1P, 4-cell Li-ion battery manages to eke out an impressive 9+ hours on a single charge under standard usage. This means it can easily power any user throughout the standard workday without needing to worry about finding the power outlet. Continuous video playback gets about nine hours of battery life with heavy usage down to about seven. The ZenBook 14 also supports fast-charging, which means you can go from 5% to 40% in under 30 minutes of charge. Great news for any user on the move. To fully charge, however, you’re looking at around two hours.

If you’re looking for an all-round Ultrabook that can easily power you through the day, the ASUS ZenBook 14 (UX425) should be very near the top of your list. If you’re a casual user, whether it be a varsity student or businessman, the Intel Core i5 variant may be a good option, with just that bit more in terms of battery life overall. If you do require the extra power, the Core i7 version will be your first choice. The 1TB NVMe SSD also offers slightly more performance gains than the lesser storage capacities for uncompromising transfer speeds.

With the many variants of the ZenBook 14, pricing starts from R20,999 for the Intel Core i5 with 512GB M.2 NVMe SSD and R22,999 for the i7 variation. Whichever variant you choose, however, there is sufficient power and battery life for whatever your usage.