If you’re looking for a replacement laptop at a budget cost, the Asus X540SA won’t let you down.

It isn’t easy being in the market for a new laptop, especially with all the different brands, different models, and different specifications there are to choose from. While almost all purchases are dictated by our pockets, we still try our best to eke out the best deals available, whether it be a good CPU, GPU, RAM, or HDD capacity. One of the common misconceptions amongst buyers who aren’t very techno savvy is that the price establishes how good a laptop is. Typically, this may be true, but buyers can always be deceived by pricing if they aren’t aware of the specs, something that was all too familiar to me growing up in a neighbourhood not accustomed to the technology.

Potential buyers on a tight budget may also find themselves of the opinion that a budget laptop they’re able to afford won’t be the workhorse they’d prefer. But, there are a few laptops on the market today that may just change that opinion. The Asus X540SA is one such unit that seeks to impress potential buyers, without them having to reach too deep into their pockets. 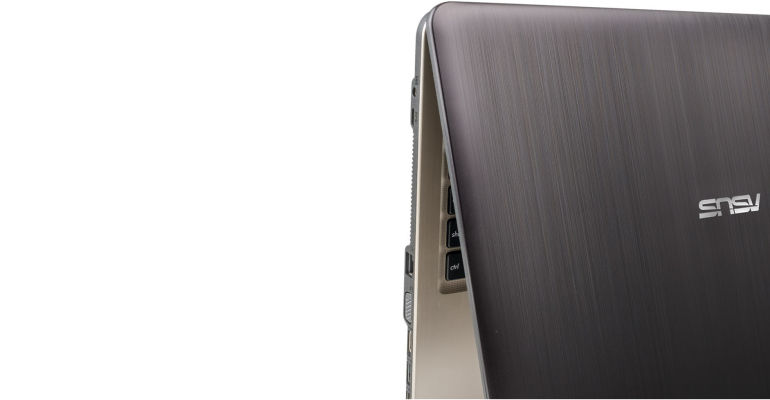 Another feature amongst budget laptops is that they’re typically cheap looking, hefty, and put together in sub-par process, leaving the buttons and ports rattling every time the unit is moved. First impressions of the X540SA is that it looks the part. The cover has the appearance of brushed aluminium, even though it is made of plastic. In hand, the plastic feel is evident, but doesn’t really matter too much apart from one annoying aspect. The plastic is extremely finger prone, leaving smudges just by thinking of touching it. The unit received for review is classified as Chocolate Black IMR with Hairline. While the Chocolate Black does fit the description of the colour scheme, which also has a Champagne coloured shell, I’m not quite sure of the IMR with Hairline denotes. The unit is both lightweight and thin, however, weighing 1.9KG with a 25.4mm thickness.

The chiclet keyboard doesn’t feel clunky as with most other budget laptops, with good key spacing and full numeric keypad. Unfortunately, there’s no backlighting on this unit, but wasn’t really expected. The trackpad supports modern Windows gestures, while at the same time is a lot more accurate than I expected. The single piece trackpad is also welcome, in both aesthetics and usefulness. There are a number of different interfaces and ports on the unit, which include an HDMI 1.4 port, Ethernet port, Wi-Fi and Bluetooth connectivity, VGA camera, auxiliary 3.5mm jack, VGA (D-sub) port, and x3 USB ports (USB 2.0, USB 3.0, USB 3.1 Type C gen1).

The 15.6″ display on the X540SA is a good one. Unfortunately, it is not quite HD, at 1366x768px resolution, but there were no crippling faults. Colours and contract are both good as well, with users able to tweak the saturation, etc. to their liking. One useful feature on the X540SA is Asus’ Eye Care technology, which allows users to reduce the emitted blue light by 33% to protect your eyes, during reading, “against potential eye fatigue and other ailments.” This is a very useful feature to have for those users who spend hours upon hours at their desks reading emails and the likes. Switching this feature on, however, changes the colour balance, which doesn’t look bad by any means, but does add a lot more saturation to the image with the reduced blue hues. In some instances, the reduction of the blue light makes for better photo representation, but isn’t always the case.

Sound capabilities of laptop speakers have improved a lot of the years, some of which are quite impressive to listen to. The sound quality of the X540SA performed admirably, hitting the high notes and deep bass. There were some instances where it sounded quite tinny, but not so much on the bass-heavy music. So, after some fine-tuning, you could easily rid yourself of the weaker sound quality, but still has slight distortion on higher volumes, but not all that much.

In terms of its internal specifications, the X540SA is very average. The unit includes an Intel Dual-Core Celeron N3050 CPU at 2.16GHz, Intel integrated graphics, DDR3 2GB RAM, and SATA 500GB HDD. Given that this is, after all, a budget laptop, the specifications are to be expected, but the results is what really matter. Thankfully, the Windows 10 OS makes light work of many of the daily functions, even more so for other Microsoft products optimised for the OS. During my testing, while most software performed as required, I had most trouble with editing tools that often require larger memory and computing power. Attempting to operate anything other than typical business tools make for some adjusting and tinkering to get the setup working as you’d like, or learning to live with the slightly slower than expected results. If you’re attempting any gaming, it may be best to reduce all your settings to low, in the hope that it may actually be playable. Games such as DotA 2 worked on such settings, but other games like Project Cars are just better being avoided altogether.

The battery fitted to the unit is a 3-cell Li-ion battery, which has 33Whrs of capacity. For the most part, it was easy to get through 4 to 5 hours of normal use, but any hardcore computing would cut you short of that mark. This isn’t an overly concerning issue, as there are numerous cooling features available on the unit that reduce the heating of the unit to maximise the battery consumption.

The X540SA includes quite a lot of bloatware that I’m not particularly fond of and almost immediately disabled for my daily usage. This not only speeds up boot time, but also removes a lot of the Windows notifications that pop-up from many of the background apps. Safe to say, given the specifications of the unit, you’ll definitely want to remove or disable a lot of these background software and bloatware to improve operations.

The Webcam passes as a camera, but only just. If you have to use it, then it works. But other than communicating via Skype, etc. It is not recommended as a camera for photos or videos at all. If you’re looking for a replacement laptop at a budget cost, the Asus X540SA won’t let you down. Yes there are a few missing features and better specifications one would want, but it gets the job done. At a SRP between R4,999 and R5,499, the unit is well priced, considering the current Rand-Dollar exchange, which has made things a lot trickier for many South Africans.

If you search long and wide enough, you will find a laptop suitable to your needs and pocket, provided those needs don’t include some form of heavy gaming. With Windows 10 a lot more optimised for modern chipsets, and less-resource hungry than previous builds, it does make things a lot better in terms of standard performance. The Asus X540SA is a really good buy at its starting price.

Check out our other Asus reviews here.