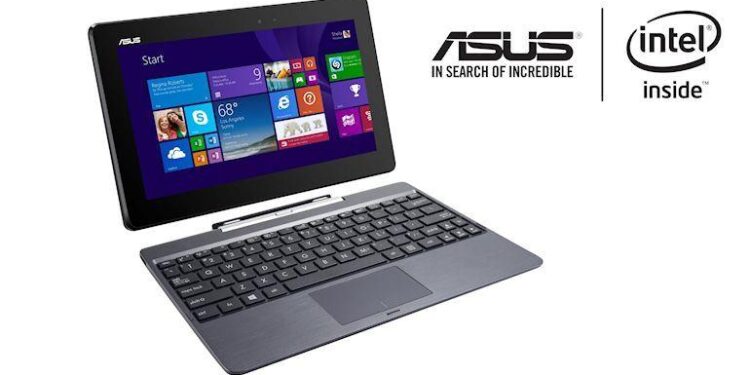 Asus is a well-known company, which produces a variety of computer hardware and electronics. While the Taiwanese-based company may be better known for their desktop and laptop products, they have started spreading out their portfolio to incorporate modern products such as tablets and hybrids. The term ‘hybrid’ has become synonymous with Windows 8 of late, and Asus, of late, has taken up a good position in producing hybrids on the Android platform for the past two to three years. The Asus Transformer Book T100T, then, isn’t a new concept for the company, but rather something they’ve become acquainted with over the past few years. The Asus Transformer Book T100T is diminutive and somewhat lightweight. The touchscreen section weighs around half a kilogram on its own, making it both easy to use and easy to lug around. Connecting the included keyboard dock, however, and the weight is bumped up to 1.1KG. By laptop standards, this is quite good, but considering its smaller sized 10” screen and build quality, it leaves you feeling a little flat. The T100T is encased within a dark grey, bevelled plastic covering. The grey is only broken by the strip of silver for the docking hinge, which is centred above the black-keyed keyboard. In short, the hybrid device does not hint at something that is premium. To make matters worse, the plastic is prone to fingerprints and smudging.

As a standalone tablet, the T100T isn’t the lightest or slimmest on the market, and, although light, appears rather bulky. The large bezel surrounding the screen also lacks appeal. Connecting the touchscreen to the keyboard dock is fairly simple to align and click into place. Disconnecting is just as straightforward, and is achieved by pushing down on the central release button located on the hinge itself. The keyboard dock is squashed together to accommodate all the necessary keys onto a device accommodating a 10” frame. The keys themselves aren’t as cheaply made as the rest of the unit and is pleasant on the touch. The dock has a different finish to the tablet with its metallic plastic frame giving off a brushed metal look. Once you’ve grown accustomed to the size and spacing of the keys, typing on the T100T will be enjoyable. The Asus Transformer Book T100T is fitted with a 10.1” screen with a 1,366x768px resolution IPS display at 155 pixels per square inch. The end result is something that is usable, without being exceptional. Compared to many 10.1” tablets of today, the resolution falls quite short of the mark, most of which accommodate for full 1080p HD resolutions. Blacks aren’t overly clear, and colours aren’t as vibrant as one would have hoped. As with the fingerprint-prone plastic, the screen also suffers the same fate. Coupled with a shiny, reflective surface, you’re left staring back at yourself through the smudges during the light of day.

On the plus side, while viewing may lack some impetus, the touchscreen presents something more pleasing to use. Responses for Windows 8 gestures are quick and easy while viewing angles are also substantial thanks to the IPS panel. The innards of the T100T are lined with Intel’s new Atom Z3740 Quad-core CPU clocked at 1.33GHz, along with Integrated Intel HD Graphics. This CPU can easily be overclocked to 1.86GHz, which then reduces the battery life of the unit. In addition, there is also a 32GB SSD (also comes with 64GB, as well as 32GB SSD+500GB HDD, and 64GB SSD+500GB HDD), 2GB RAM, and a 2 Cells, 31 Whrs Polymer Battery. Great emphasis has been placed on the CPU, which although is still an Atom processor, has a much-improved performance spec over the previous generation chips. The overall experience isn’t bad, even considering the low-end power output on Windows 8.1. Animations are smooth and lag free, and you can easily complete tasks while running many different software programs concurrently. In fact, the performance of the new Atom chip is almost identical to that of the Core i3 chips on a normal laptop. Even using ‘heavier’ software such as Photoshop and Paint Shop Pro delivers good results.

At the same time, it is important to point out that this isn’t a gaming rig or high-end device comparable to an Ultrabook or even many standard laptops. Performance, on the whole, is good, but when switching to something more entertainment driven, you will be left quite short. In addition to the poor display for watching movies, Intel’s integrated graphics don’t deliver performances that can accommodate more than the basic Windows Store games (Solitaire, Freecell, and the likes).

In terms of the battery’s performance, Asus has an indicated battery life of around 11 hours, which is fairly substantial for a hybrid device as it is. When considering the fact that the keyboard dock doesn’t include an additional power source of its own, extracting such long hours from the tablet’s battery alone is even more impressive. Power users can expect a charge lasting anywhere between 8 and 10 hours, whereas the average user can easily bypass the 11 hour mark, sometimes extending into 2 days on light usage. Asus may not be the first to hybrid market, but has had its finger in the pie for some years now, and is definitely one of the first companies to make a success out of this new market. Alongside Intel’s drive toward more-affordable-yet-powerful chips, the Transformer Book T100T hit a lot of the right notes during the review period. Unfortunately, the overall experience left a lot to be desired; the display being the most significant of these. As with many of the hybrids in the price bracket, the T100T makes for a perfect student accessory with its blend of portability and power but fails to deliver the knockout blow required to land bigger fish, such as that of small to medium business professionals. With prices ranging from R3,500 to R5,500 depending on the allocated storage, the T100T falls into the budget category for laptops and hybrids. Be that as it may, it easily stands at the top of that market segment, making it a really good buy for those looking for a replacement any time soon.