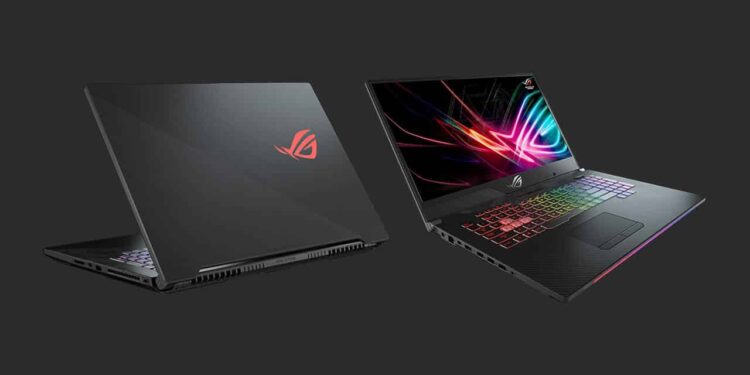 ASUS kicked 2019 off with a bang when it launched a slew of new laptops across various ranges at an event back in January. The event showcased what the company had planned in the near future, with a great mix of designer, performance and gaming units for all tastes. One of the units on display at the showcase was the ASUS ROG Strix Scar II GL704. It may be a mouthful when having to write out the full title and while being a gaming unit, the GL704 isn’t playing any games – well, figurately that is. ASUS announced many of the units with the various categories, but it would seem that it rather underplayed one of its greatest units ever released. Let’s dive in.

Laptop design has undergone various iterations over the years, which has evolved to a more sophisticated approach in the last year or two while the mobile gaming range continues to boom across the globe. Gone are the jet-inspired vents on the rear (in most cases) with many brands focusing on much cleaner builds, hiding most of unnecessary frills or components they don’t need users thinking about 24/7. The Strix Scar II GL704 is a massive unit with its large screen, but that isn’t to say it’s clunky. The unit has a much more focused design, relying heavily on lighting to provide most of the effect over previously chunky builds with weird edges and strange layouts.

The unit has a largely aluminium-based finish, which is most noticeable on the lid. The lid itself is split into two smooth textures, a plain brushed diagonal, contrasted against the cross-hatch brushed finish. The design is only broken by means of a giant ROG logo, complete with its own LED lighting. Opening up the lid and a similar theme awaits you. The keyboard area is split into two smooth textures, this time in a classic texture, which is diagonally split against a faded camouflage pattern on the right-hand side. The keyboard, then, provides the LED lighting in impressive form. The LED lighting also spills over to the front of the unit, lining all across the edge from left to right.

While the unit is fairly large, it isn’t the biggest or heaviest around.

While the unit is fairly large, it isn’t the biggest or heaviest around. Measuring 399x273x26.4mm and weighing 2.9KG it’s just about average for a gaming unit. In terms of inputs, there are quite a few. On the left-hand side, there are x3 USB 3.1 ports, a full-size HDMI port, mini DisplayPort, Ethernet port and the charging port. On the right-hand side, there’s an SD card reader, USB Type-C port and yet another USB 3.1 port, along with a Kensington lock on the rear. So, you won’t find yourself wanting in terms of any input requirements you may have.

Overall, the unit is well-built and has a good enough aesthetic. There weren’t any squeaks, creeks or flexing to speak of, adding confidence to the solid build. The lighting effects also added to the appeal, which can be customised as well if you’re not into the flashiness of it all. Unlike many other laptops that tend to overcomplicate things with the touchpads, the unit fitted to the GL704 is fairly straight-forward. The buttons, too, are separated with soft-clicking, which has a distinct click when depressed. The touchpad itself is fairly accurate, which is comforting. This means that gestures such as scrolling, etc. aren’t overly complicated.

The keyboard is well-spaced, making it great for speed typing. The backlit keys also add to the experience, which, as mentioned previously, can be customised for a flashy lighting experience. However, the customisation does have its limitations, in that you can’t adjust various sections, instead of having to commit to a complete effect across the board. Although the keys are well-spaced with accurate keys, there are a few oddities. For starters, the Home and End keys are combined into one, which in itself is quite small. What makes it even more peculiar is the fact that the R-CTRL button is larger than the Enter key. The biggest visual downside is the transparent WASD keys, which looks more cheap than stylish. There are quite a few shortcut keys, though, which is a plus. 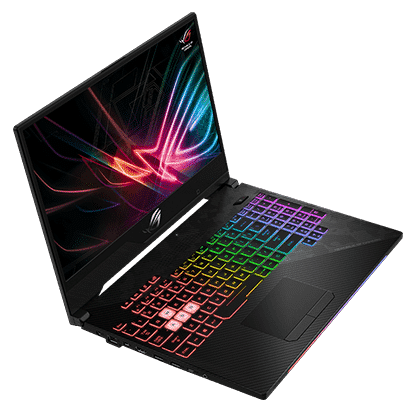 One of the standout features on the GL704 is its screen, which has a 1080p native resolution with a 144Hz refresh rate. With a 3ms response time, it is impressive for FPS games and the likes, making for a smooth gaming experience.

The screen is fairly evenly lit with no bleeding, ghosting or uneven patches across it’s 17.3″ panel. The panel doesn’t use PWM (pulse-width modulation) to regulate the brightness, so it lessens the effects of glare on the eyes, reducing strain and headaches for sensitive users. Images look sharp with no graininess or pixilation to speak of.

The screen is fairly evenly lit with no bleeding, ghosting or uneven patches across it’s 17.3″ panel.

Where the unit does lack some modern touches is its lack of NVIDIA G-Sync capabilities for hardcore gamers. Interestingly, the range of ASUS Zephyrus units does sport the technology, which makes it a curious omission.

The 17.3″ panel is surrounded by slim bezels on the top and sides, with the bottom bezel enlargened for the inclusion of the ROG logo. The bezel also houses the webcam towards the bottom right. While I haven’t used it at all, I’m not so sure about its positioning, focusing up my nostrils.

Where the unit truly comes to life is with its specifications and, more importantly, its performance. For starters, the Strix Scar II GL704 has an Intel Core i7 8750H 2.2GHz CPU on an Intel Cannon Lake HM370 motherboard. This includes 32GB DDR4-2666 RAM (maximum capacity), as well as an Intel SSD 660p, 512GB NVMe SSD and a Seagate 1TB SSHD. These are pretty impressive specs, which results in extremely powerful performances. The GL704 boots up in no time at all, within 10 seconds from power off to Windows desktop. What’s more impressive is the fact that there is a Turbo mode, which pushes clockspeed of the CPU to 3.9GHz across all CPUs and 4.1GHz on four processors.

Although not the top of the range, the NVIDIA GeForce RTX 2070 is more than capable of handling all your gaming requirements, from 4K to VR. The laptop variant of the GPU includes 8192MB, Core: 1215MHz, Memory: 1750 MHz, GDDR6, ForceWare 417.71, Optimu. Gaming performance is great across the board, and even while the screen has a 1080p native resolution, the 4K downscaling is still great. For 4K gaming, the unit achieved an FPS over 40fps on average and over 60fps on 1080p resolution. What’s interesting about the 2070 GPU is not that far behind the 2080 GPU for most games, averaging 4% difference. There are, however, some games optimised for the 2080, given it a 50% performance gain. Still, the 2070 is great value for money.

If there’s one downside to the performance, it’s the cooling system. The fans aren’t the quietest around, with the unit getting fairly warm during high loads, such as gaming.

In terms of battery performances, the GL704 has a 66Wh, 4-cell battery. Running through the performance tests, the unit falls just shy of the 90-minute mark, which isn’t all that great. It’s worth pointing out that the unit automatically reduces the CPU and GPU clockspeeds by 50% when on battery power. This means that if the unit were powered to maximum clockspeeds, it wouldn’t be able to cross the hour mark. While GL704 is a portable gaming unit, it’s best the unit is continuously plugged in when in use. The great thing about unit is that it charges fairly rapidly. From zero, the unit charges to 50% in 30 minutes. This compared to other laptops requiring charging times between two and three hours.

As with many high-performance laptops, ASUS has included a number of proprietary software, including Sonic Radar III, ASUSGift box, My ASUS, Armoury Crate. The Sonic Radar III allows users to make changes to the sound setup of the GL704, while the ASUS Gift Box has various games and apps available to ASUS users. The MyASUS software provides diagnostics and operations features to monitor the performances of the laptop.

The most powerful app from the collection is the Armoury Crate. This software allows users to control almost all aspects of the device, from CPU overclocking, customising the unit per app, customising shortcut keys, firmware updates, as well as tie-in apps to get the most out of your unit. Another tie-in feature on the app is the mobile support, which allows you to connect your smartphone to the device in order to track performances on the go.

When I received the ASUS ROG Strix Scar II GL704 I expected the standard gaming unit for review. Instead, I was treated to a feature fest. The hardware is top notch, with a few modern omissions in terms of the G-Sync for example, but still delivers supreme performances across the board, while still packing it into a reasonably sized frame. Unlike many other units which include the lower-powered Max-Q GPU variant, the GL704 sports the full GeForce RTX 2070 GPU experience.

The Strix Scar II GL704 isn’t cheap, however. Priced at R39,999 it will set you back a pretty penny. There are sufficient positives to make it very worthwhile.

Without over-exaggerating, the ASUS ROG Strix Scar II GL704 is the best unit I've reviewed over the many years I've been in the industry.