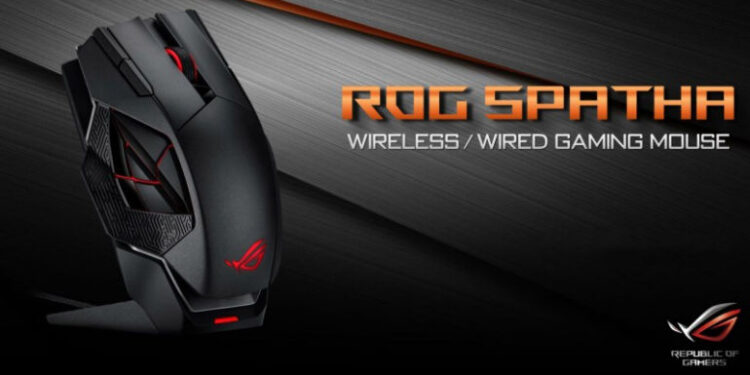 There are many brands across the globe associated with gaming peripherals, and Asus has been one of those pushing the envelope when it comes to all things gaming related. That said, they don’t have a huge footprint or reputation when it comes to the gaming mouse, with the market dominated by the likes of Logitech, Razer, SteelSeries and Corsair. Asus’ ROG division looked to change things up a bit when it announced their new range of gaming mouses back in April, one of which included the Asus ROG Spatha Gaming Mouse.

After more than a year of teasing the market with the release of the Spatha, it arrived to mixed feelings. The 12-button gaming mouse was designed more towards the MMO market, but has some practicalities across all genres. Going back just over a decade, and there weren’t that many gaming mouses to choose from, with many brands seeming rather generic. Fast forward to 2016 and we’re left with questions as to whether the heavily saturated market has room for another big player. So then, can the computing giant compete with the likes of its competitors when it comes to the Spatha? Moreover, can it be competitively priced for what it’s offering? Before getting into all the specifics on pricing and comparisons, we’ve got to admit that the Spatha certainly looks the part. That said, it quite an enormous piece of equipment, and unashamedly so. This means that it takes up quite a lot of your standard desktop mousepad’s real estate, but Asus has included the Sheath mousepad as part of the review, which itself is huge, and takes up the entire width of my desk. Apart from being big, the repercussion of that is that it also weighs quite a lot, at 179g. To put that into perspective, the Logitech G900 weighs just 107g and the Razer Mamba 125g, both of which aren’t tiny by any means. Another aspect of the Spatha you’ll quickly notice is that it lacks the ambidextrous design associated with many gaming devices of late.

Although it doesn’t negate the size and weight, the Spatha has a really quality build and finish. The unit has a magnesium alloy chassis, Omron® switches, Alps® encoder scroll wheel, and a Mayan-patterned rubber grip. Just from the touch alone, the device screams premium. The smooth, magnesium alloy base means that it’s quite nimble on the slide, and it most respects it is. I could easily slide the Spatha across the mousepad, simply by pushing it with my finger it would glide by itself for another centimetre or two. Still, though, the weight makes it feel a lot more sluggish than it should’ve been. The unit, however, is easy to grip, and with all the unique angles, it also makes it easy to position your fingers without feeling discomfort. But, this also has the added limitation in that it doesn’t support all grip styles, geared more towards the palm grip.

The Spatha has 12 programmable buttons for all your MMO shortcut needs. But getting used to them is by far the most difficult learning curve for any mouse I’ve reviewed. Interestingly, the 6 thumb buttons have a layout in the shape of the ROG eye logo (you’ll have to do some squinting to notice the abstract art here), making them discernible from one another, but aren’t as easily clicked due to their different sizes. That said, they do have a natural feel to it, although remembering each will take some time, something I haven’t mastered in the two weeks of the review period. There are two buttons to the left of your index finger, which have a default setting as the back and forward buttons for browsing and navigation. These buttons were also a bit tricky to reach, which could have been avoided if it were positioned a bit lower down, or on the right-hand side to be used by the pinky or ring fingers.

Overall, the build and design of the Spatha provides a few hits and misses, and maybe just a little too novel to get everyone on board. Once you’ve gotten used to the design and layout, and possibly remembering each of the thumb buttons, the design choices to start to reap some rewards. 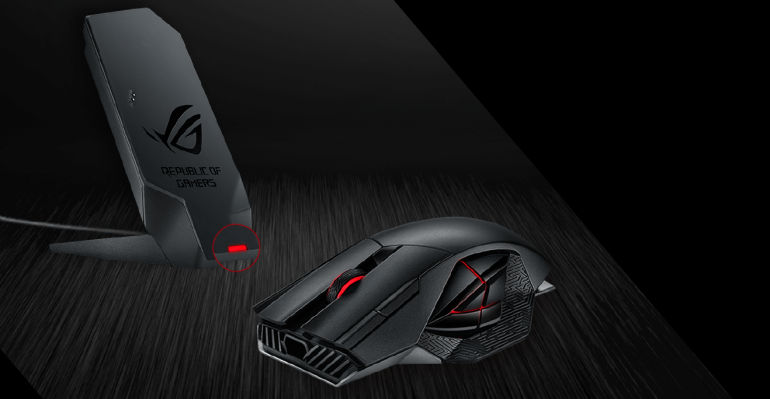 I’ll start off with the features. And yes, there are plenty fitted into the Spatha. Firstly, there are the obvious lighting capabilities. By default, they pulse red, the ROG colour of choice, but can be customised by the software, from the 6 lighting modes, to the RGB colour circulation. In addition, there are a few different colour zones, which include the ROG log, scroll wheel, and side buttons, which can all be customised separately.

The Spatha comes with customisable click resistance. Users have a choice of Omrom switches they prefer, a 60gf (gram force) or heavier 75gf actuations. To change the resistance, however, you’ll have to open the unit and replace the switches themselves. Asus has done a neat job with this, providing a tool, which you may need to magnetise the tips for assistance, to undo the screws found underneath the rubber feet. The process is rather simple, even unclicking and switching the switches. The 65gf pair is rated for up to 20 million clicks, whereas the heavier 75gf pair only 1 million.

As with many other gaming mouses these days, the Spatha has the option of being used as a wired or wireless mouse. The wired approach is pretty straightforward, simply plug the USB cable into the mouse and the PC and you’re good to go. The wireless option includes a charging platform, which has a metallic build standing upright by means of a kickstand, and connects to the mouse by means of magnetic pins to charge. The charging platform also has its own LED lights indicating charging and connectivity. Users can remove the kickstand to use the charging platform as a flatbed, depending on their preference. The issue I had with the kickstand at times is that due to the strong magnetic pins needed to keep the device attached when upright, it makes it a tad tricky to remove from the dock. Additionally, because the kickstand isn’t attached all that well, the whole platform collapses on the odd occasion. I eventually managed to get the hang of it by sliding the mouse upwards before pulling it off.

Although it’s not necessarily a feature, the Spatha does have its own carry case, which includes slots for all the contents, from the charging platform to the included tool and spare switches. This is quite useful when having to travel with your gaming rig, and you hopefully won’t lose some of the pieces as easily.

In terms of the performance stats, Asus hasn’t included any of the latency numbers, although they did provide the DPI (maximum at 8200 DPI), 150 IPS, 30g acceleration, and 2000Hz USB polling rate for wired mode. These are fairly straightforward numbers compared to other gaming mouses, so nothing major to report on as yet. The Spatha does perform quite well in both modes, and I had no issues during any of the numerous gaming sessions I had. If you’re one for specifics, it is worth noting that using the Spatha at the max 2000Hz polling does mean additional computing power is necessary, which does have a slight impact on the FPS, although we’re talking in the range of less than 5 here.

The 150 IPS (inches per second) speed is standard, but is dwarfed by the 300 IPs on the Logitech G900, which also has 40g acceleration. For most users, however, these stats are insignificant, but given that those most likely to purchase the Spatha, or any other gaming mouse for that matter, will be very picky on these stats. On average, I’m comfortable with a DPI setting between 4000 and 5000, which is already quite sensitive, and most users that do use my mouse often find this troublesome. I would imagine using the device anywhere near the 8200 DPI would require a very sensitive hand.

Since I used the device most often in wireless mode, measuring the battery life for normal usage is very practical. That said, thanks to the charging platform, I found myself continually placing the mouse back on it almost as a natural reaction, even after the first day of use. I did make a notable effort to leave the mouse off the charge for a length of time, but thanks to the auto hibernation settings, the device goes into sleep mode within a few minutes. This means that the Spatha easily managed more than 3 days before I placed it back on the charging platform by mistake without running the battery to its limits. Needless to say, with the inclusion of the charging platform and kickstand, there’s very little to worry about, and even after 3 days of standard usage, which includes plenty of game time, there was still sufficient battery life.

What I really enjoyed about the Spatha is its pick and go approach. Even with all the buttons, the default settings make it easy to plug in and use. Installing the drivers and software, however, do have great benefits when it comes to customisation for particular games. And given its MMO approach, this is a must.

The ROG Armoury software is a Windows-only application that allows users to customise quite a few aspects. These features include adjusting the keys, the surface calibration, lighting customisation, macros, and many more. Users are also able to store 5 profiles with different settings, depending on your current requirements, and can be swapped out on the fly. The profiles are stored on the device itself, and can be used on other PCs and laptops upon first use, even without the software installed. 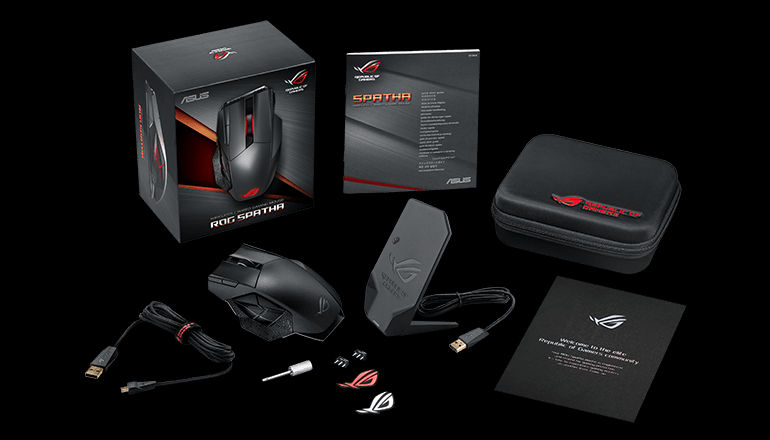 After all is said and done, there’s a lot to love about the Spatha, as Asus has added some very useful features and design options to make it stand out from the crowd. I’m not sure how many users will get many benefits of some of their novel ideas, like the interchangeable switches, but having it there is useful enough. This does, however, mean that features such as this could push up the price somewhat. The RRP for the Asus ROG Spatha Gaming Mouse is a whopping R2,499, which is quite steep to say the least. And when you compare it against the likes of the G900, which hits a lot more of the sweet spots at almost R1,000 less. That said, the Spatha goes up against the likes of Steelseries Sensei and Razer Ouroboros, which it definitely has an advantage over in terms of specifications and features.

There’s no doubt that Asus has explored some of the underlying aspects of what makes a good gaming mouse by allowing users almost full customisation of their product. Some of the glaring missteps, such as its weight and bulkiness, could have easily been avoided to move it up a few more positions on the leaderboard. What it does do, however, is make the major players take note of what it means to be customisable, even allowing users to open the device, which oftentimes is a big no-no for manufacturers. If the Spatha is anything to go by, we can expect quite a lot from Asus in the near future, provided that there are sufficient sales to support future R&D. 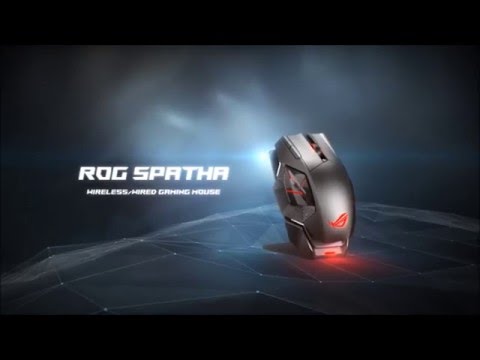