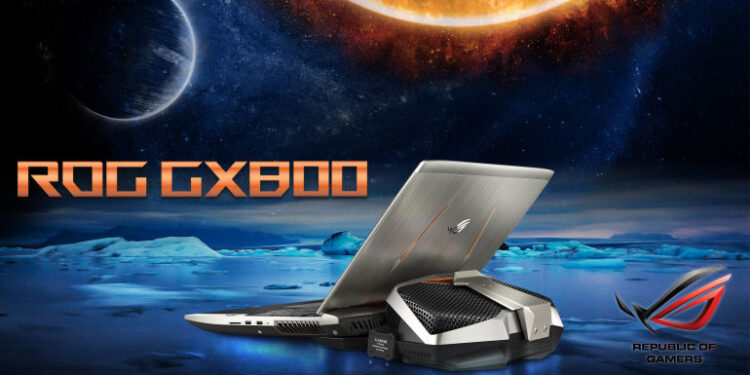 Asus RoG has announced the release of the powerful gaming laptop, the GX800, which offers advanced liquid cooling, real 4K UHD and an NVidia GeForce GTX1080 SLI graphics setup…but at a price.

Along with the GTX 1080 SLI and 4K UHD gaming resolution, the GX800 has an 18″ screen, along with NVidia G-Sync, and also supports leading VR headsets. Additionally, the GX800 features the Mechanical Tactile Advanced Gaming (MechTAG) keyboard, with programmable ROG Aura RGB LED effects for individual keys. The Hydro Overclocking System provides the necessary cooling performance for extreme overclocking of both the CPU and GPU. The system boosts the GX800 clock frequencies from 3.2GHz to 4.2GHz.

The ROG proprietary connection between the system and the GX800 ensures a smooth flow of coolant between the two without any leakages, and is pumped and circulated around the CPU and graphics cards. The GX800 is powered by two 330W power adapters to cater for the extra demands. What’s interesting about the 18″ screen on the GX800 is that it’s the world’s first gaming laptop to provide real 4K UHD gameplay, where games can run at Ultra graphics settings at frame rates averaging over 60fps. The Asus ROG GX800 will be available in South Africa from February 2017 at Evetech and DionWired, which will require an order on request. That said, the unit will set you back a cool R129,000.00, which explains why.