Now, there are 3 things I love, my mom, my beard, and cars. I had the good fortune of receiving 2 games to review at the same time, and to make it even more like Christmas in July (or August, as was the case), they were both racing games. Oh, happy day! Assetto Corsa was one of them. Maybe it’s because the other game I received was Formula 1 2016, that made this offering from Kunos Simulazioni seem so weak and unfinished. This was a rather surprising realization in that I really thought F1 2016 (which was the other game I received) would be the one that sucked, and Assetto Corsa would be the game that rekindled my love of virtual racing.

I loaded the game and immediately noticed that it looks really bad at times. Only at times, though, like when you’re racing… when you’re sitting still or in a menu screen, all is good, but actually, do some racing and the screen rips and tears like a fat kids pants.

This would be understandable, I guess, if it was a terrific looking game, but it’s really just OK, at best…

So what is up?

Is it because there is so much background computing going on simulating real-world physics?

I haven’t driven a Ferrari La Ferrari before, so I can’t say if what I’m experiencing is accurate, but if the real car is as skittish as this game makes it out to be, I’m going to spend my R 20 Million somewhere else… Content-wise, I was hoping for something new, but all of the circuits are the same fare as every other racing game out there, though they do have a really nice realism about them. Black lines on track and scuffed up curbs, you can almost smell the tortured tyres in the air… lovely.

I would love to try break the lap record around the Nurburgring’s Nordschliefe in the rain, but in Assetto Corsa land its always beautiful sunny skies. Seriously, there are no weather options that I could see.

I tried starting the game in Career Mode, having been spoilt by F1 2016, but this Career Mode is, in a word, useless!

If you don’t finish in the top 3, you may as well not have done the race, so get bumped down to 4, restart, go off track, restart, get bumped by the AI (which just hates you for being there), restart.

The Special Events option looked like an alternative, and to be fair, is a lot of fun. This includes options for Quick Race, Time Trial, and Hot Laps, but I wouldn’t buy this title to only play these options.

What I did really enjoy is the Drift Mode though is that, even on its starting level, you need to achieve 100 000 points to get gold!

I never achieved this. The best I got was bronze, and that took me close to an hour of trying. Maybe this would be easier if I had a wheel, but with a controller…? I don’t have that much time to dedicate to trying. OK, maybe that’s going a bit far, but the sound of this game, on my home theater system anyway, is definitely one of its strong points.

Getting back to the AI, it really does hate you. Every car on track will try run you off the road for no reason other than it just does not like you. A slight tap will send your ridiculously sensitive car spinning arse about face into the bushes, and the AI car will carry on like nothing happened.

So Career Mode is pointless, Drift Mode is way too difficult, Hot Lap is fairly challenging and quite satisfying to get right, but once you have, there’s little to no reason to ever try it again.

This leaves Time Attack to try save this game…

So in Time Attack you have to do the typical sprint between checkpoints within an allotted time. This is quite a bit of fun, but, surprisingly, very very easy…

Well, apparently there is a big DLC that adds a whole bunch of goodies to improve the game, like more cars, tracks, and events, but is going to cost you very close to the base games sticker price…

Now we get to the online experience.

There isn’t one. Not in SA, not yet, and as the games are region locked, you can’t race anyone internationally either. At least not at the time of writing this.

Is there anything good I can say about Assetto Corsa?

The race tracks are simulated quite well, but some of the geometry of the road will send your car straight into a barrel roll and have it all end in tears, but it will all sound fantastic!

So I guess, no, I have nothing good to say about Assetto Corsa.

If you are looking for a good race sim, spend your money on Formula 1 2016. 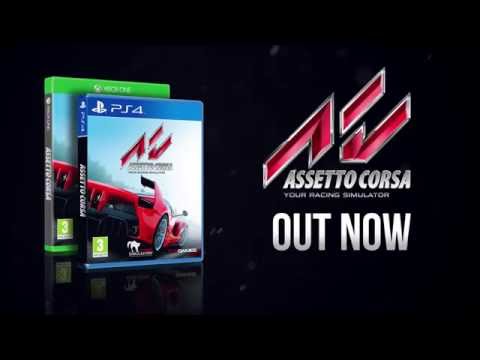