The Club C is a silhouette straight from Reebok’s archives. The 80s-style aesthetic is reminiscent of the tennis shoes of yesteryear.

The base model is typically featured in an all-over white colourway, honouring its tennis heritage. However, there are a few models featuring a mix of colours in the form of the Reebok branding, the rubber soles, heel tabs and the likes. And this is the same on the Assassin’s Creed Valhalla X Reebok Club C.

The sneaker features a mostly clean white leather upper. The Reebok vector logo is featured boldly on the lateral and inner side of the upper. It stretches from around halfway up the forefoot all the way to the heel. The black logo is contrasted against the white leather.

The Reebok text is prominent throughout the sneaker’s design. This includes the heel tab on the rear, on the midsole towards the back, as well as underneath on the outsole. But this isn’t the extent of the branding.

The rest of the branding includes a number of Assassin’s Creed Valhalla graphics. This includes the twin battle axes on the heel counter, on the tongue and the insole. The most prominent of these, however, is featured directly above the Reebok vector signage. The words “Like A Viking” is the motto of this collaboration and is included on all sneakers in the pack.

Tying the design together is the colourway. There are three main colours across the silhouette. White, black and what is known as emerald sea upon which the Vikings made their mark. The emerald sea colour is featured on the on the logo on the tongue, the insole and the heel tab. It also extends further than the upper, with the entire outsole beneath the silhouette. There’s also an option of two lace colours, white or emerald sea. There is a fourth colour, an off-white featured on the midsole.

The low-cut Assassin’s Creed Valhalla X Reebok Club C strikes the perfect tone for the classic aesthetic. Pairing the ’80s design with the emblems of the Vikings makes for a great throwback to the Middle Ages in which they sought to explore the world. 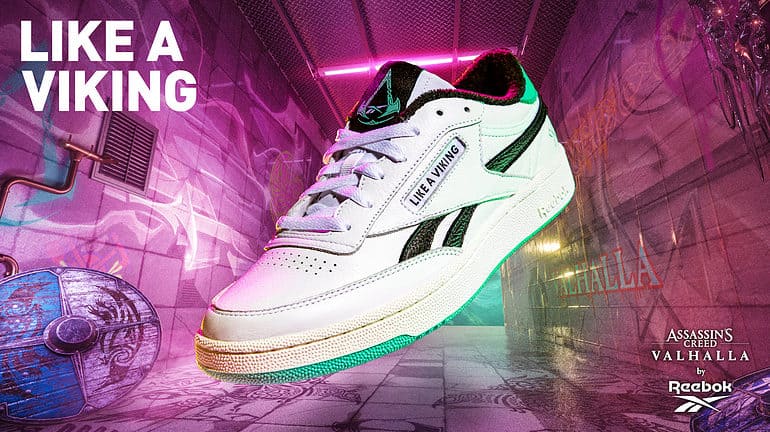 With many of the classic sneakers remade for the modern world, comfort isn’t always something that goes hand in hand. That said, the Club C has its roots in the athletic world within the realms of tennis.

As such, the Assassin’s Creed Valhalla X Reebok Club C is comfortable underfoot. The comfort is provided by means of the cushioned insole as well as the rubberised midsole with EVA finishes.

The sockliner is moulded for precision to keep the foot comforted while walking. The padded tongue and collar add additional cushioning when on the move.

Thanks to the comfort of the sneaker, it can be worn as an everyday shoe. Initially, the leather on the upper will be a bit on the stiff side, but after a few wears it will soften.

As a result of this, however, the leather will develop creases over time. This will be mostly on the top end of the forefoot where the most flex occurs.

Buyers will have two options then. The first of these is to proudly wear your new sneakers wherever you go, being the envy of onlookers.

The second option is to keep the Assassin’s Creed Valhalla X Reebok Club C as a collector’s item to be displayed and not worn. Irrespective of your choice, the sneakers are as good underfoot as it is featured on your cabinet. 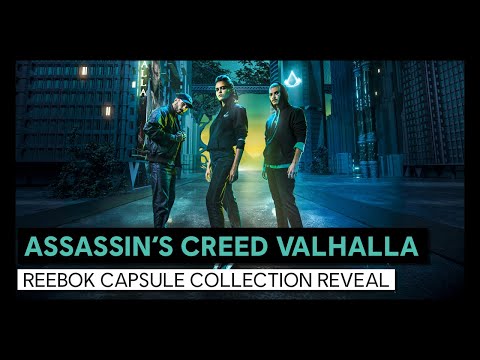 As stated in the above section, the Assassin’s Creed Valhalla X Reebok Club C is a comfortable sneaker. It is very versatile, bringing with it a mix of options except one. There are no stability elements added, and the flat outsole and insole doesn’t make for a good running shoe. But you wouldn’t expect it to be.

It’s still very solid and durable. The quality of the materials used it top notch. Especially so as a collaboration piece. Each of the elements look neat and crisp, both to look at and to touch. The Assassin’s Creed Valhalla X Reebok Club C collaboration is a great-looking and comfortable sneaker. It carries the branding and graphical elements befitting the game.

The sneaker brings the world of the Vikings into the modern world, with a mix of culture and attitude. The bold aesthetic and choice of colours makes ideal for the Viking in you.

I’m still caught up in two minds whether I’m going to be using these regularly, or they should take their spot next to two other collectible sneakers I have. Either way, they’re great.

The rest of the range will be available from 16 November, as well as in stores. The range of sneakers is also accompanied by apparel and accessories. The socks and cap are currently available, with the hoodie and trackpants dropping later.

The Assassin’s Creed Valhalla X Reebok Club C is a great sneaker, whether as an everyday shoe or as a collector’s piece. It carries a retail price of R1,499.

Enter our Fortress X Reebok competition here to stand a chance to win a Reebok voucher worth R2,000.

Worlds collide with the release of the Assassin’s Creed Valhalla X Reebok Club C. The super-comfortable sneaker has a bold, yet simplistic aesthetic. Bringing the Viking saga into the modern age, featuring colours of their life at sea.