With another year comes another Assassin’s Creed game, and each year Ubisoft tries to build upon the formula and mechanics of the previous title in the series. Does Assassin’s Creed Syndicate succeed by learning from the mistakes of its predecessor?

The 9th game in the series, Assassin’s Creed Syndicate takes place in industrial-era London in 1868, a time when gangs prowled the streets and the lords of industry ruled the economy. This time around we are introduced to the Frye twins, Jacob and Evie. This is the first time in the franchise history that players will be able to play as two characters, Evie an expert in sneaking and keeping to the shadows, and Jacob who tends to try and fix most problems using his fists.

One thing that I really appreciated when it came to the story of Assassin’s Creed Syndicate is that it tended to stay away from the convoluted lore that was so prevalent in the previous games, and instead it keeps the story focused. The story follows the twins as they head to London in order to free the city from the control of Crawford Starrick, a master Templar. As the story progresses players will find that both Jacob and Evie each have their own ideas on how to achieve this, as Jacob wants to wrestle control from the Templers using brute force while Evie believes that finding an ancient artifact may hold the key to the city’s freedom. During the story, there are moments when the player gets to interact and complete missions for famous historical characters such as Charles Darwin, Charles Dickens, and Alexander Graham Bell.

For the first time in a while I found myself actually enjoying an Assassin’s Creed story, even though it isn’t a very complicated tale. This was in part due to the two new protagonists and the supporting cast of characters. I found both Jacob and Evie to be quite likable, which was hard to say about some of the previous protagonists in the series. Both differ in their personality and how they react throughout the story, Jacob being brash and impulsive and Evie strategic and calculating. There is a sense of sibling rivalry between the two that tends to complement not only the game but the story as well. 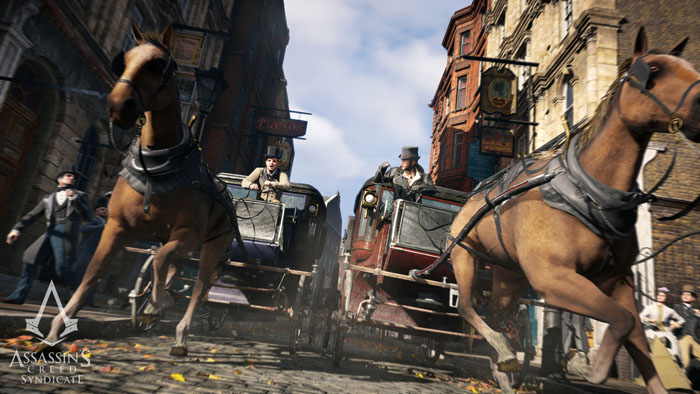 In Assassin’s Creed Syndicate, players can freely switch between the two siblings, except in the case of some story specific missions. With such different personalities, I was really disappointed that the twins played very similar. Each of the siblings has a skill tree that players can level up using experience gained by completing missions. The only skills that differ between the two siblings are the higher level skills, for instance, Evie can effectively become invisible while Jacob’s higher level skills give him access to more deadly combos. It is disappointing that the full potential of having two different playable protagonists was not fully realized.

The city of London is a beautiful, smoke filled, dirty and sometimes colourful place, where both the wealthy and poor live in an uneasy relationship. This divide between the classes is made even more apparent by the state of the populous that wander the streets as well as the conversations that take place between them. The city permeates atmosphere and I had to stop, and pause a few times to take in my surroundings, especially when the sun was setting while chimneys filled the sky with smoke. How the industrial revolution affects the city and the lives of its people are visible everywhere, from the factories dotting the landscape to the steamboats traveling on the Thames. 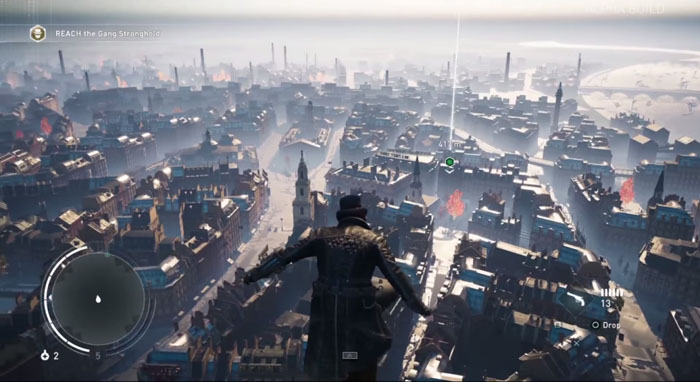 I also have to make mention of the brilliant music in Assassin’s Creed Syndicate which is some of the best in the series. It beautifully captures the mood of the oppression faced by the poor and tugs at your heartstrings. The music and songs truly enhance the atmosphere of London. Navigating your surroundings effectively is a big part of an Assassin’s Creed game, and Syndicate makes taking in the sights and sounds of London a little easier, as traversing the city overall feels faster and more fluid than in Unity. Syndicate also introduces the new rope-launcher, which I found to be one of the best new additions to the series. Taking its queue from the Batman Arkham games, players can use the rope-launcher to quickly launch a zip line in order to ascend a building faster or travel across gaps between buildings.

As with previous games, I still found myself running up the wrong building or slamming into walls, as the controls sometimes tended not to respond how I hoped they would, causing some unplanned deaths. 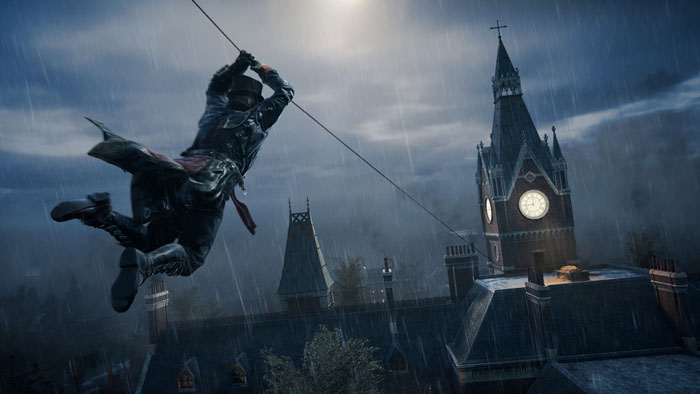 Not only can players traverse the city on foot or using the rope-launcher in Assassin’s Creed Syndicate, players can in true GTA style now hijack any of the carriages that travel on the new wider streets. These carriages make traveling long distances a lot quicker and are great for kidnapping targets, which players get to do in some of the side quests and missions. As with GTA, there are also police and gang members patrolling the streets, who will not hesitate to try and ram your carriage off the road. I found these carriage battles to be quite fun, as you are able to climb on the roof and jump from carriage to carriage. This helps add some variety to the game.

The newest iteration of the combat system in Assassin’s Creed Syndicate looks and feels more fast paced than in the previous titles, although it still can feel like a button mashing fest at times. Players have access to three weapon types, Kukris (basically a knife), Cane-swords and Brass Knuckles which like the rest of the gear, can be upgraded by spending money and resources. Thanks to Mr. Bell players also have access to electrical grenades which is used to incapacitate your foes

London is also filled with a wide range of side missions and objectives to distract players with. Most of these revolve around liberating the various boroughs from the control of the Templar gang called Blighters. To achieve this players are tasked with completing missions that include, rescuing child workers from factories and hunting down and disposing of Templar gang leaders. Once a borough has been successfully cleared of Blighters, a gang war will trigger. These reminded me a lot of the Gangs of New York movie, as Jacob and Evie’s gang The Rooks faces off against the Blighters and their respective gang leader. Once the gang leader and their gang are wiped out The Rooks gain control of that borough. I did find that these missions tended to become repetitive over time, especially towards the end of the game where it is required to control a set number of boroughs in order to proceed with the story missions.

By far the most interesting story missions are the assassination missions where players are given a target as well as a few ways in which to eliminate them. How they choose to proceed is up to them. It’s during these missions when you are given free reign that I experienced my most memorable moments. Assassin’s Creed Syndicate is not without its graphical shortcomings. I did experience some pop in when racing a carriage across town, but the biggest culprit tended to be characters pulling a disappearing act. This did not only seem to affect the protagonists (I had to play a mission with an invisible Jacob) but also some of the architecture. These bugs were less of a problem than in Unity and tended not to distract too much from the overall experience.

Fans of the series will love the game and the new mechanics it offers. London is also a beautiful setting to experience and filled with all kinds of distractions. Those that could never get themselves to enjoy the Assassin’s Creed games, and was hoping that Syndicate might be the game to change their minds will be disappointed. Assassin’s Creed Syndicate isn’t perfect but offers fans of the series and those that haven’t played any of the games in a while a fun enjoyable experience in a great setting with some interesting characters.