Ash Vs. The Army Of Darkness #1 Review – What Fans Have Been Waiting For 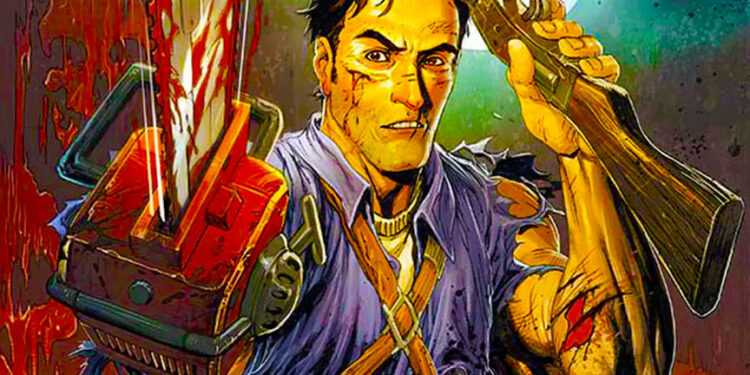 Welcome back, Ash… again. Although that’s Mister Williams to all the juvenile jerk school kids out there. Yes, that’s right: Ash is going back to school. The Necronomicon – the skin-covered book full of demonic resurrection rituals – has been opened up once more and this time it’s at a school in Michigan. Naturally, it falls to Ash to investigate, which means posing as a substitute teacher and occasionally battle whatever evil forces are unleashed. Still, if he does a good job then his classic Oldsmobile Delta 88 car will be fixed up good as new and he can ride off into the sunset. But detention may just be more than Ash can handle in Ash Vs. The Army Of Darkness #1. If you don’t know the legendary Ash Williams, then you’ve missed out. He’s the hero who stops the Evil Dead and all those other Deadites from wiping out the human race. He’s the hero who every woman wants and who every man wants to be like. He’s the hero who saves the world five times before breakfast, and that’s only because he likes waffles. He’s the hero who… who… Okay, so only some of that is true. He may be the best man for the job when it comes to killing Deadites, but he’s also usually the guy who starts all the trouble in the first place.

This first issue does a fantastic job in terms of both story and, more importantly, in capturing Ash’s character in perfect hammy detail. Every line uttered by Ash in Ash Vs. The Army Of Darkness #1 is exactly the sort of thing you would expect Bruce Campbell to say whenever he’s playing Ash on the big (or small) screen. The school setting is so ridiculous that it works, and you can just unplug your brain and enjoy it as the goofy, gory entertainment it is.

The only complaint I had personally was a slight dilemma with the art.

The cartoonish style works, and Ash is clearly Ash, but there’s something of a double-edged sword here. That style certainly adds a great deal of fun to the reading experience, and it helps the story whiz along at an almost frenetic pace which is infectious. The downside is that there also seems to be a lot of wasted space on each page of Ash Vs. The Army Of Darkness #1, with a few over-sized panels too many for rather normal moments. Yet if a more conventional approach were taken with it, it might fill up that space but it would mean sacrificing the playful feel of the book.
You see my problem?

Thankfully, that’s a minor thing and one which really makes no difference at the end of the day. If you’re a fan of Ash, the Evil Dead, Army of Darkness or just good bloody fun, Ash Vs. The Army Of Darkness is exactly what you’ve been waiting for.