It’s a statue and it looks good.

It’s a little hard to review this. It’s gorgeous to look at and of high quality, so if you like Batman and you like statues then this is just what you’re looking for. This is easily one of the best on the market, and very much in the style of Jim Lee right down to the gripping soles of Batman’s boots. Sculpted by Kouei Matsumoto and standing 11 inches tall, it’ll make a fine addition to a collection.

On the down side the flimsy plastic base isn’t that great and the feet don’t slot into the little pegs to balance it, except with patience and a little effort. Still, once it’s in place it’s sturdy, stable and Batman is ready to fight crime on your shelf.

That’s what it says on the box. I’m not kidding. Since I started this article, I can tell you that there isn’t much to be said about a statue because, as a product, it’s exactly what it’s supposed to be. It stands there doing nothing and either it looks good or it doesn’t. Yet the people behind the statue had to write some copy for the box, and it’s actually hilarious.

I won’t rewrite the whole thing, but they genuinely say that this Batman statue is going fight crime on your shelves. Personally I don’t have any crime on my shelves, although Blue Beetle and Booster Gold always look like they’re up to something. I don’t think the dark knight detective is going to get many cases to solve there, to be honest.

According to the box he’s also in a wide-legged stance and ready to punch someone or pull something from his utility belt. Oh, and apparently it’s also good to show off “the billionaire playboy’s muscular physique”. Sure.

You know how Joel Schumacher wanted those Bat-nipples on his heroes’ costumes, and we mocked him for it? While those are thankfully absent, there’s another muscular body part of this billionaire playboy which is somewhat obvious from his wide-legged stance.

You can guess which part.

Amazingly, the people responsible for mentioning such attention to detail also made a spelling error in describing it. It isn’t a bad spelling error, but it’s still there. Oh, and they misspelled the sculptor’s name on the bottom of the box too.

So what’s the point? It’s a great sculpture, it really is. More than that, it does what sculptures – and indeed what any other type of artworks – are supposed to do: it speaks for itself. It doesn’t need a lot of ridiculous press-kit hype printed on the box to sell it, and sometimes saying less means more. It’s a lesson that the people behind this statue should learn.

But then, couldn’t we all? 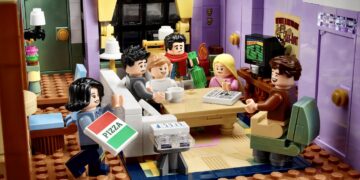