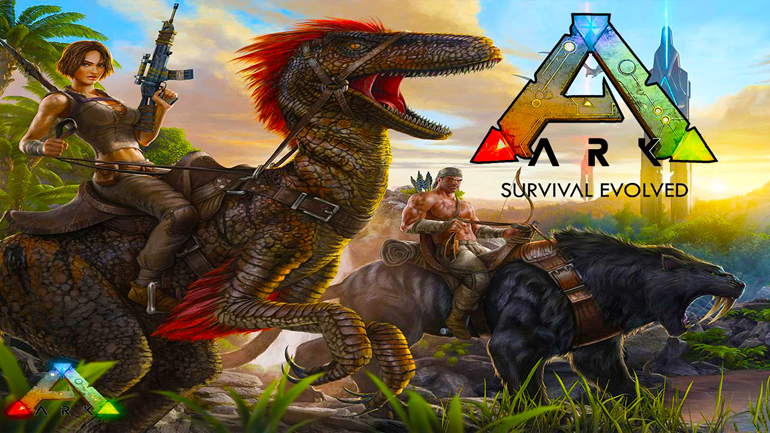 You wake up cold, confused and mostly naked on a beach. Around you, the sea slowly laps the shore as you try to figure out who and where you are. You finally decide to try and explore your environment but, just as you start investigating the beach and surrounding waters, you are attacked (and eventually killed) by a dinosaur/killer fish/human wielding a spear or automatic rifle. This sums up most player’s first experience playing Ark: Survival Evolved. 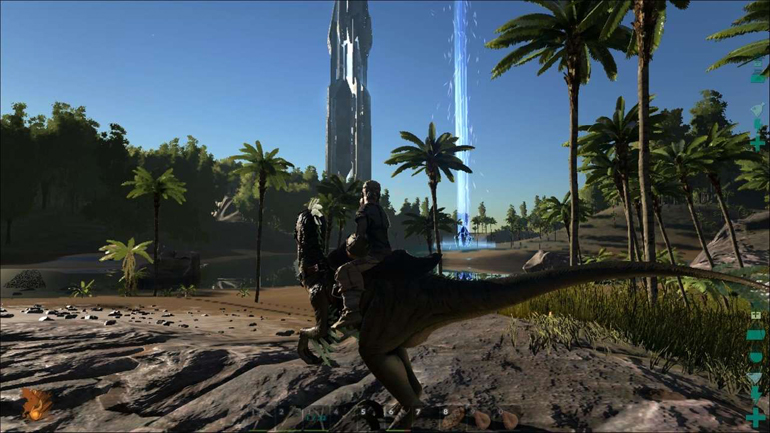 Ark: Survival Evolved is a crafting and survival game that drops you on an island with nothing but your wits, bare fists, and a little piece of cloth to protect your modesty. It might not seem like much but out of these humble beginnings, you are tasked with building a dinosaur taming empire. But first, you have to survive before you can thrive. This might sound easy but, thanks to the game’s obtuse nature, I spent most of my first few hours trying to figure out how to do what and where to find the resources required just to survive my first night in this inhospitable place. The first few days on the island is a terrifying affair as you are constantly looking out for dangerous dinosaurs who might stroll into your camp for a midnight feast or, if you are playing on one of the PvP servers, fellow players out to loot and kill. All these struggles are worth it though as you slowly build up your base and pool of resources until you are finally able to tame your first dinosaur. That’s right, Ark: Survival Evolved lets you tame and ride dinosaurs.

While the continuous grinding and gathering might not be to every player’s liking, most will forget all the toiling as soon as they climb onto their first dinosaur. There are more than 100 water, land, and air creatures to tame in Ark, which should keep even the most avid hunter/tamer busy for quite some time.

The process of taming itself can be just as arduous as gathering the resources needed to be able to tame in the first place. In order to tame a wild dino, players have to first knock it unconscious by either using blunt weapons or tranquillizer bullets and arrows (which you unlock much later in the game).  After knocking out the dinosaur, you have to slowly nurture it back to health making sure it doesn’t wake up before it’s taming bar has filled (which it does at a really slow pace). Your patience will be rewarded, however, with your own dinosaur to name and, once you unlock a saddle for it, ride.

Not only will you be able to charge your dino into battle, just like your avatar, but players will be able to level up their dino’s various stats. I actually found that this made it easy to customise each of my dinosaurs for a specific task. Want your trike (Triceratops) to lug around all your stuff? Then up its carrying weight. Want to turn your castoroides (giant beaver) into a killing machine? Then up its attack and health. It’s an interesting mechanic that made most of my vast heard (flock?) of dinosaurs feel a little more unique. 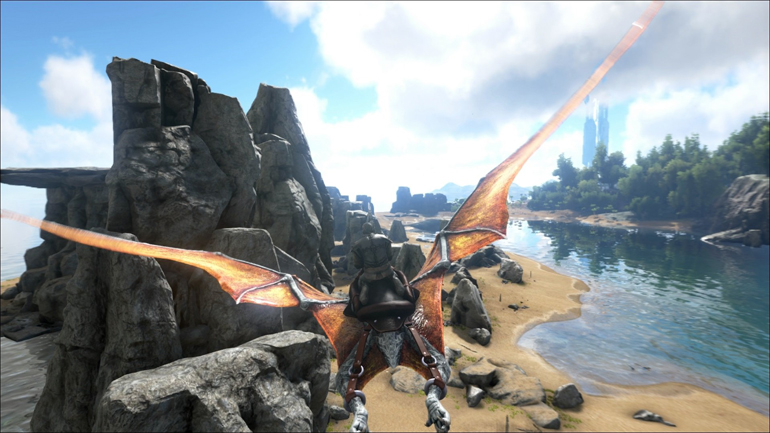 As you evolve from stone club wielding savage to automatic rifle wielding savage, you will slowly unlock new levels and crafting recipes. I was pleasantly surprised with how many recipes, called Engrams, there were to unlock. Crafting these various recipes will, like most things in the game, require loads of resources. Luckily, your dinos can help you harvest these in quite large quantities, meaning that your electrically powered steel fortress will be up and running in no time. Of course, the ease of evolving and expanding your base depends mostly on which mode you play. While dinosaurs are the only thing to worry about playing single player, playing on a PvP server is a completely different story. Even though you and a few friends would be able to eke out an existence on these servers as a tribe, I found trying to go it alone almost impossible. I would either find myself at the wrong end of another player’s spear, arrow or rifle or return to my camp to find all my hard-earned resources looted. And while many might argue that these trails form part of the survival theme (it’s right there in the game’s title), it sure makes playing the game less fun. I would only recommend that you take on the PvP servers if you have a few buddies willing to die alongside you. An alternative to the single player and PvP modes is the PvE servers, which I found suited my playstyle of not dying all the time much better. I was quite surprised when I realised that the single player mode actually had an interesting campaign which reveals quite a bit about the mysterious Arks. And while it mostly boils down to summoning bosses which you then defeat in order to unlock a final area, it did offer a lot more than I expected. 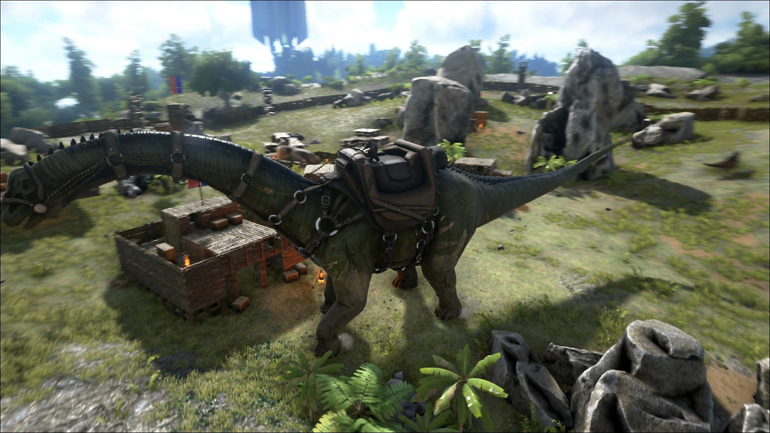 Unfortunately, not everything is perfect in dino land. My first major gripe, and one that haunted me throughout my gameplay, was both how obtuse and complicated the menu system is. I continually forgot where to access which commands or recipes, which had little to do with my memory and more to do with how convoluted these menus can become. Along with the unfriendly menus, I encountered loads of graphical issues. I frequently experienced pop-in textures, screen tearing and frame rate drops. And when one of your best strategies to capture a large dinosaur is to get it stuck on the environment, you know there is a problem. While Ark: Survival Evolved might be a complete and utter grind fest marred with convoluted menus and graphical bugs, I still couldn’t help myself from continually playing it. For each of the game’s many issues, I discovered something amazing, like flying next to a ginormous Quetzal or diving to the depths of the ocean. If crafting and resource gathering isn’t your cup of tea then Ark: Survival Evolved won’t change your mind. However, if you are looking to build your dinosaur empire and become the dino-whisperer you’ve always wanted to be, Ark: Survival Evolved might just be the game for you.