Aquaman is still making waves as one of the best comic books in DC’s Rebirth lineup. While this issue may seem like it’s just treading water to some, it’s still striding ahead of many other titles. Continuing where the first issue left off, in Aquaman #2: The Drowning Chapter 2 he has his hands full combating Black Manta who staged a terrorist attack on the Atlantean embassy known as Spindrift Station.

[dropcap]A[/dropcap]mazingly, that’s all that Aquaman #2: The Drowning Chapter 2 is about. It’s little more than an extended fight with Aquaman and Black Manta trading blows, in a battle which fans have seen countless times by now. But that’s the point here; the context is what’s key, with far more at stake than the usual clichéd end-of-the-world scenario. This is about how legacies are made, perpetuated, perceived… and altered.

Wonder Woman: Come Back to Me #6 Review – A Fun Read

With Aquaman trying his best to be an ambassador for the Atlanteans, he’s politically stuck between a rock and a hard place. The surface-dwelling humans don’t trust him or his people, while the Atlanteans generally despise surface dwellers. Trying to make peace between them isn’t ever going to be easy, and with terrorists on both sides looking to destabilize the situation it’s a tough job.

Throw Black Manta – intent on avenging his father’s death and destroying any chance at peace – into the mix, and you understand how complex Aquaman #2 is.

It’s a battle for hearts and minds, and where better for Aquaman to start than with Black Manta himself, a foe whose sole motivation is revenge? Symbolic of Aquaman’s current political problems, it’s a fight which has to be resolved peacefully in order for the cycle of violence, hatred and distrust to end. But with Aquaman’s wife Mera injured and an enemy determined to end his life, can Aquaman successfully take that first step?

Aquaman #2 is an incredibly misleading issue, and thankfully so. If you’re after cover-to-cover action, this pretty much delivers. But it’s a comic with a message, allowing the opinions and thoughts of the combatants to be laid bare so that you can understand them. These aren’t one-dimensional characters, they have serious issues and a lot to work out. It looks great and tells a solid little story, and what more could any reader want?

Well… a little more attention to some other characters would have been good. Mera, an intriguing counterpoint to Aquaman thus far, spends a great deal of the story unconscious. The new addition of Royal Navy Lieutenant Joanna Stubbs has a huge amount of potential, but in Aquaman #2 she’s mostly on the sidelines too. However, they’ll hopefully get their time to shine soon enough.

It’s another solid issue in what’s been a standout series so far, telling stories which reflect the current state of the world without making them seem preachy in any way. 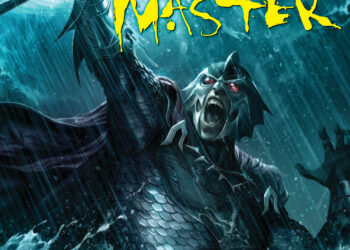