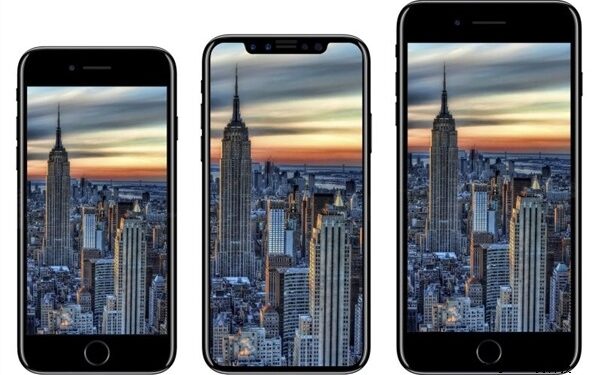 Well, it’s been a whole week since we last checked back in on the latest rumours and leaks for the Apple iPhone 8 and a lot has changed and come to light since then. Here’s another quick round-up of these developments.

If you missed the previous rumour round-ups, you can find those here and here.

First things first, take a look at the latest leaked image by means of ruggedised cover, posted by Evan Blass via Twitter.

Number of Devices – More Than Just The iPhone 8

Recent suggestions have been that Apple will release a number of devices at the launch later this year. Information has surfaced on Apple Insider that the company will include other devices to the launch alongside the iPhone 8, that being the iPhone 7s and iPhone 7s Plus. All indications are there to suggest that this is true, with previous years’ releases also pointing at this. In addition to the two 7s devices, however, it’s also rumoured that an iPhone SE 2 is on the cards, which may be called the iPhone SE (2nd generation) instead. That’s a total of four iPhone devices. Coupled with a few colour variants and storage capacities, we’re looking at more than 20 different devices to choose from when released.

Many readers may have stumbled across the post by means of the title, it’s not a matter of just being clickbait and may have some substance to it. Over the course of the past 12 months, Apple has looked to expand their Asian reach, with a lot of focus on China during this time. According to reports this week, Apple has been looking for the “next China” which was indicated as being India.

Focus Taiwan, a Taiwan-based paper that works within the CNA (Central News Agency), reported that the iPhone SE’s next edition will be launched alongside the rest of the iPhone collection this year. That same report indicated that Apple will be looking to launch the SE in India and may be launched ahead of its US launch. Apple has been manufacturing the current SE in India in a manner to have more appeal in the country with a “manufactured in India” tag added to it, as the company partnered with local factories and the likes to make it happen.

Names can be a big pull for prospective buyers and something companies have spent a lot of marketing on in recent years. That said, Apple hasn’t done much in the way of name changes for the iPhone, or any of their other devices for that matter, but that may change with the iPhone 8. Rumours have suggested that the device won’t simply be appended with a simple digit but rather a more premium tag in the form of either the iPhone Pro, iPhone X Pro, or iPhone Edition. New Colours To Choose From

While many could’ve put their houses on Apple releasing black and a white variant of the new iPhone, the third colour was always a topic of debate. A leak earlier this week has indicated that the third colour may, in fact, be copper. Even if the leak proved to be true, the actual colour is still a topic for debate as to whether it was actually copper, salmon, gold copper, or some other variant. The images came courtesy of Han Han via Weibo, a familiar source in the rumour mill circus leading up to previous years’ releases. In our last rumour round-up, I posted that the company was struggling to add the embedded fingerprint scanner to the iPhone 8’s screen, which meant the company are looking at other methods of providing streamlined but secure screenlock options. With a few suggestions about the fingerprint scanner within the power button on the side of the device, many fans weren’t impressed by this. Apple, however, has also been working on updated facial recognition software and it has come to light that it may include some form of AI as well, apart from just to unlock your device. Some of these AI elements are features such as the device being aware of when in use, adapting how you receive calls and other notifications, switching from sounds and vibrations to simply popping up on screen, as you’re already using and looking at the screen. This feature was found hidden in a bit of code that was also leaked earlier this week. In its early days, iPhone fans had to constantly ward off the haters with lines like “I don’t need a bigger screen” and many, many other excuses. As it turns out, Apple felt the pressure growing in this respect year on year, and finally started to release larger-sized screens in later years. This year’s iPhone 8 is said to have the largest screen ever fitted onto an iPhone. With the display being manufactured by Samsung, evidence suggested the company has started ramping up production of OLED displays of late, most likely ahead of the new iPhone release. Yield rates have shown around 80% and 60% for 6″ and 5.8″ panels, respectively. If this is found to be true, it could mean production of 99m 6″ panels, and 78m 5.8″ panels per year. With all previous indications, the iPhone 8 may include a 5.8″ screen, with the S9 possibly being fitted with the 6″ panel. This also indicates that the other iPhone devices to be launched won’t include the same OLED panel, but rather a lower resolution, LCD panel.

In the previous update, speculation was that the next iPhone would release between October and November. An analyst’s research has anticipated the launch of the next Apple iPhone will be towards the end of September, with the actual factory mass-production only kicking off from mid-September. This first round of production would include between 2 to 4 million devices, meaning that all first wave pre-orders will be fulfilled in late October, with sales starting from November for all others. Production is indicated to reach 50 million units by the end of the year to keep up with the holiday season sales.