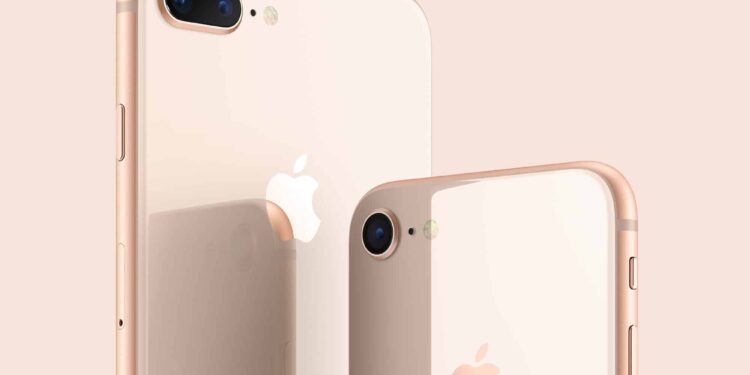 Home > Tech > Apple iPhone 8 Plus Review – A Step Towards X

Apple iPhone 8 Plus Review – A Step Towards X

Way before its September announcement and October release date, the iPhone 8 has been the talk of the tech industry pretty much the day after the iPhone 7 and 7 Plus was launched. Such is the state of the smartphone industry that there’s barely a moments rest to enjoy the newly released units before speculation starts swirling once again. That said, if you look back at the first-released iPhone 6 Plus, nothing much has changed on the surface over the four iterations to follow. The iPhone 8 Plus looks like the iPhone 7 Plus, which looks like the iPhone 6s Plus. But, if you’ve followed Apple’s design methodologies over the years, there’s very much in the way of a major overhaul in between any of the iterations over the last decade. For Apple fans, that’s a huge plus, given that the design has been solid from the start. But, is it enough to keep the fans coming, while also trying to lure a few newcomers in 2017? As mentioned in the intro, there’s not that much to write home about at first glance. In fact, if you compared the iPhone 8 Plus to the iPhone 7 Plus, it will take a reasonably trained eye to notice the subtleties in the design changes. For starters, the rear is no longer covered in a complete aluminium casing, opting instead to use glass – which works better to conduct the charge wirelessly. For long-term users of iPhones, or more specifically the Plus variants, you’ll notice smoother edges around the device, which creates a much better feel in hand.

In terms of the physical specifications, the iPhone 8 Plus is ever so slightly bigger than the previous 7 Plus, while also a bit heavier. The 8 plus measures 158.4×78.1×7.5mm while weighing in at 202g. Compared to the dimensions of the 7 Plus at 158.2×77.9×7.3mm, the differences are insignificant. There is a 20g weight advantage on the 7 Plus at 188g, although most of that may be down to changes in the internal hardware.

There are three colour variations to choose from, which include a glossy black and space grey highlights, white with silver, and blush pink gold (rose gold). 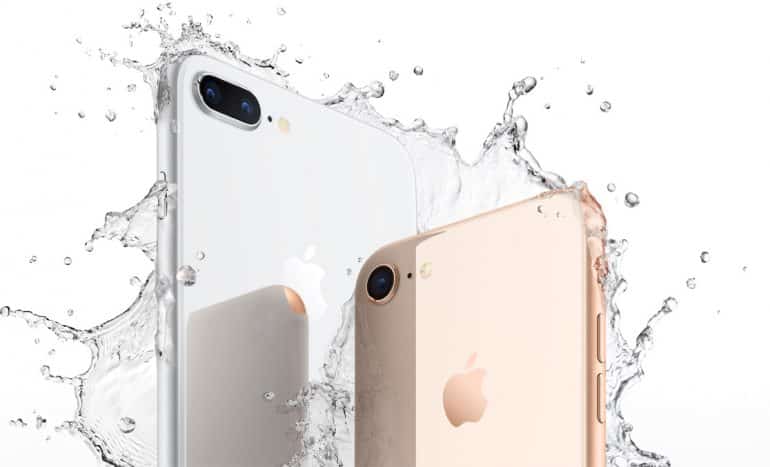 In terms of the screen and display, the iPhone 8 Plus is pretty much identical in terms of the specification breakdown over its predecessors. But, there is one major difference, True Tone. The 2016 variant included an updated screen that included the Wide colour gamut display capabilities. This no doubt enhanced the experience over the 2015 variant. In the same manner, True Tone has made quite a difference, having debuted first on the iPad Pro earlier this year. The True Tone display change the temperature of the colours on display, which removes quite a lot of the blue tint we’ve become accustomed to in recent years. It may not seem like much on paper, but turning the feature on and off in the settings makes for pretty noticeable and impressive results.

As is always the case, Apple leaves their major overhauls to the internals of the device. This year is no different. Apple’s newly developed A11 Bionic CPU is a dramatic improvement over the A10 Fusion, most notably how it enhances the camera’s sensors for better image optimisation for each shot. The A11 is their fastest chip ever produced, as it should be. But, over and above the marketing talk, the unit is able to handle a lot more load in computing algorithms needed for enhanced features, such as AI. The Hexa-core processor accounts for quite a lot of additional functionality that’s been added in the software department, most of which are behind the scenes, but enable quite a lot. In addition to this, the unit also includes 3GB of RAM, with your choice of either 64GB or 256GB of internal storage. Noting, of course, that you don’t have the option to increase your storage by means of an SD card, you’ll have to settle for what you have alongside the obvious cloud storage option. The overall result of the enhanced hardware capabilities is felt in almost all aspects of the device’s day to day, especially if you’re paying close attention. Apple has always been proud of their “it just works” unofficial moniker to describe the iPhone’s mainstay, and the iPhone 8 Plus certainly makes it feel that way. The UI remains quaint and easy to use, only improving on previous iPhone shortcomings.

Given the Apple’s push towards offering better AR functionality going forward, it isn’t uncommon to note that there aren’t many developers that have fully embraced the additional power at their fingertips, offering more of a generic and watered-down experience, considering that many of the games look and perform similarly to that on the iPhone 6s. It’s still early days, but given Apple’s huge investment in this field, it makes sense that AR will be their standard in the not too distant future.

In terms of the overall battery life, the iPhone 8 Plus might have a smaller capacity, but provides much longer runs on a single charge, improved by the updated OS and more efficient CPU. Users will easily be able to extract more than a single day’s use on a single charge. Even the majority of power users will be able to power through a full work day before reaching for the charger. 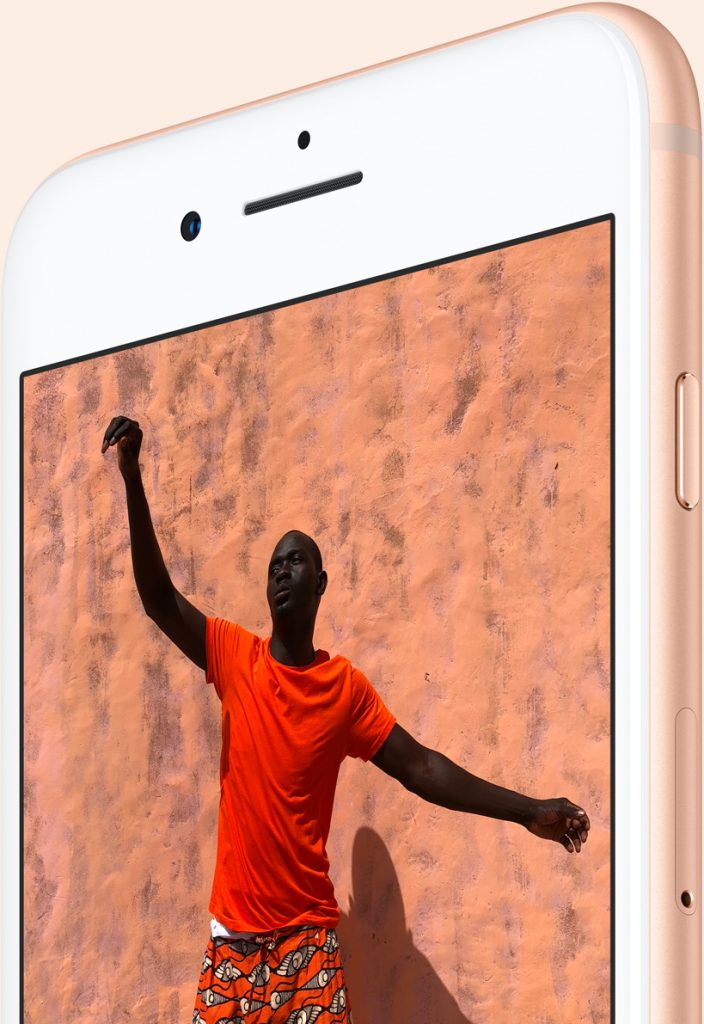 The iPhone 8 Plus comes installed with iOS 11, although you should be able to upgrade to 11.2 from the first time turning on the device. Alongside the new A11 Bionic chip, iOS 11 works really well, smooth and efficient. The OS adds new features in the form of an updated Control Centre, better Siri, AR support and better camera capabilities. One of my previous annoyances with iOS was how it simply chose to ignore some of the more basic features users would want, instead insisting what it is they need. Apple has adopted quite a bit more functionality users have enjoyed on Android for years already, and the inclusions now make for a welcome introduction, although fairly late to the party. Coupling Apple’s “just works” capabilities of the iOS framework alongside some of Android’s best features makes for a welcome change and a better user experience as a result.

There’s a long-standing debate among fans of the two franchises, Samsung and Apple, as to which device takes better photos. The battle hasn’t always been so straight-forward, with the baton exchanging hands on multiple occasions over the year. Samsung has dominated this space in the most recent years, right up until Apple announced its new flagship products in September. Apple has finally made its way back to the top where it can now do battle against the other giants in the industry.

The iPhone 8 Plus sports a dual 12MP rear camera. The first of these has f/1.8 wide-angle camera while the second has a f/2.8 telephoto camera, providing better zoomed-in photos without the same level of degradation as many other cameras. The coupling of the new OS software and internal hardware, gives the camera quite good support to quite a lot in newly included features, with improvements to the ISP (image signal processor), which allows for better capturing of textures and colours. Comparing images side-by-side with the previous iPhone 7 and Galaxy S8, the improvements on the iPhone 8 makes for good reading. It’s hard to draw sufficient distinction in the many different cameras on flagship devices, with some cameras performing better in some aspects, while others are better in different situations. The same applies here. The camera takes brilliant images and colour reproduction, but may still have a long way to go in making AR more mainstream. The Apple iPhone 8 Plus is an impressive device, although it remains to be seen whether the sales will reflect on this. Given its likeness to the previous iterations of the Plus lineup, fans may be put off by this. Apple has kept most of their improvements internally, behind the scenes, and may only be really felt and noticed once in specific situations of use. Also, I don’t think it does enough to convince non-Apple fans to make the jump, since many of those buyers are looking possibility for style and not overall performance.

At a retail price of R15,999, the iPhone 8 Plus isn’t the most affordable device on the market and certainly puts the things into perspective when compared to the many other flagships of 2017. Furthermore, the iPhone 8 Plus has the added pressure of competing against its big brother in the form of the iPhone X, a unit that delivers a lot more in terms of its AR capabilities, and improved screen, among other outstanding features. The iPhone 8 Plus is a much harder sell but still does a lot better than the standard iPhone 8 in terms of what it offers versus price.