Ever since Apple invented the tablet in 2010, the company has had a pretty strong hold on the market over the past years, with many of its main competitors slowing down their release schedule, with some falling out of the race completely. It would be easy to expect that Apple would take their foot off the gas as the sales continue to roll in month after month. Just over two years ago, Apple announced a more premium, more powerful version of their popular tablet, the iPad Pro in a 12.9″ variant. A few months later, Apple released a 9.7″ screen option. Both devices were well received, although didn’t quite match up to Apple’s vision as it being the PC replacement the world has been waiting for.

Another year on and Apple released the updated versions of both screen sizes in June 2017. The 9.7″ variant, however, received a slightly increased size, now at 10.5″, with both units receiving a hardware overall. In a rather strange turn of events, Apple managed to release a device ahead of its time, literally. When it was launched in June, many of the features available on the new units wouldn’t be available until the launch of the latest software version, iOS 11. Thankfully, this update became available shortly after South African release. 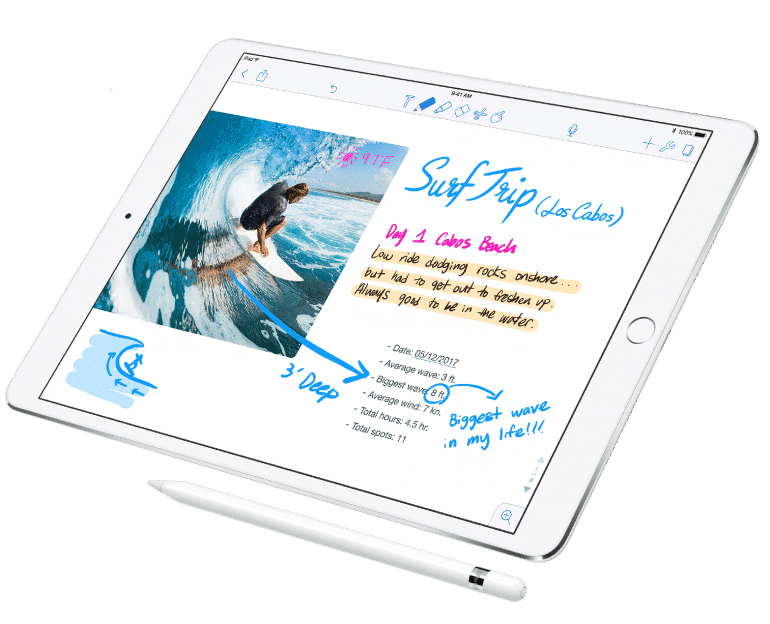 While the iPad Pro may still resemble the original, it’s still quite different. That said, the 2017 edition has almost exactly the same specifications as its predecessor from 2015. In terms of the dimensions, both units have the same 305.7×220.6×6.9mm specifications, although Apple has managed to drop the weight by 36g to 677g for the Wi-Fi version, while the LTE variant is slightly heavier at 692g. The weight reduction is welcome, especially considering the size of the 12.9″ device.

The size is quite a significant factor here. There’s no doubting the increased size is the result of an attempt to compete with or replace the laptop. At least that was the theory in 2015. The large-framed device isn’t very easy to use in two hands, and near impossible with one. This meant I had to use the tablet on my lap to perform daily tasks, play games, or while drawing. When used with the Smart Keyboard (discussed in more detail below), the unit had some resemblance of using a laptop, although with a completely different UI experience.

As is the case with most of Apple’s product, the iPad Pro has a metal chassis. There’s no denying the quality of the product. There are four speaker grills on the unit, two on the top and two at the bottom. This makes for a bit of a surround sound experience, with reasonable quality, but nothing considered as great. The single home button is still prevalent on the iPad despite it being dropped on the iPhone X, which also has the TouchID capability. There’s also a 3.5mm on the top of the device, yet another surprise when you consider it was removed from the iPhone lineup. 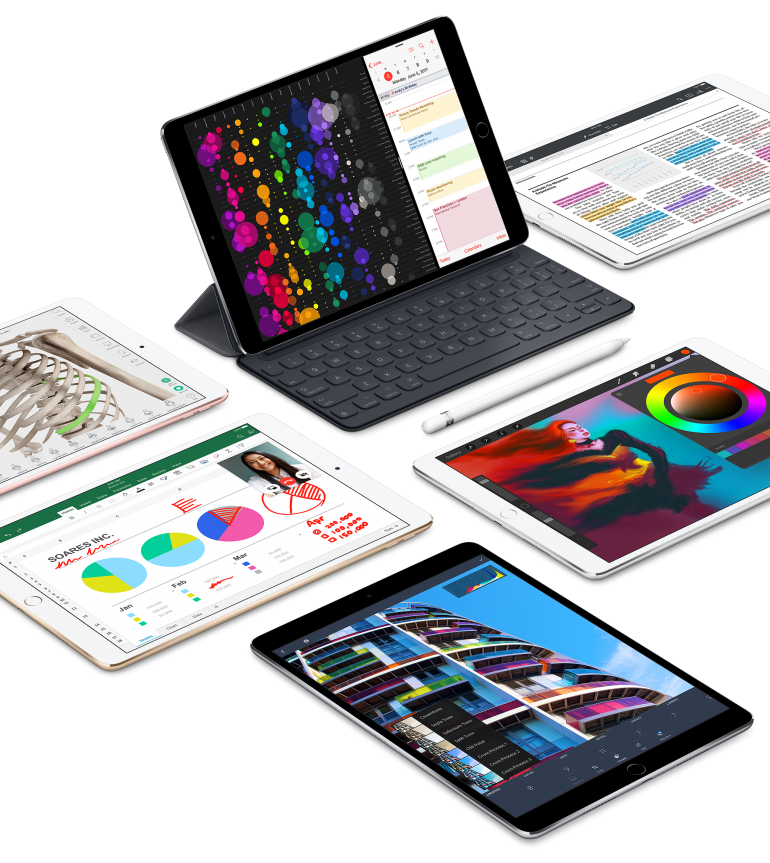 One of the biggest improvements on the iPad Pro is the screen upgrade. While the resolution remains the same at 2732x2048px and 265ppi pixel density. One of the improvements is the TrueTone display, which ensures you’ll always have the best colour representation no matter the lighting conditions as it changes the white balance on screen. While this feature was already available on the original 9.7″ iPad Pro, it is a welcome addition to the larger screened unit.

One of the better improves here is the ProMotion Display. This feature allows for a variable refresh rate, allowing the unit to dynamically change the speed in the frame rate. It may not sound like much, but it essentially means that while the display isn’t changing much, the refresh is dropped, and when you’re scrolling the menus and the likes, it increases to give you a brilliantly smooth experience, almost fluid. The unit is capable of reaching a refresh rate up to 120Hz, a lot more than your every LCD monitor at 60Hz, let alone on a tablet. All these may just seem like fancy names for basic gimmicks, but these make for an overall much-improved quality and experience. Words can’t simply justify the user experience without experiencing it yourself. It’s like VR, you can’t explain it to anyone in sufficient detail. Overall, then, the screen quality and visuals are, simply put, amazing.

Both iPad Pro units are powered by Apple’s A10X Fusion chip. This chipset is a slight upgrade to that bolted onto the iPhone 7 and 7 Plus of 2016, which is said to have a 2.38 GHz clockspeed on a 64-bit CPU. The CPU is paired with 4GB RAM, which, in conjunction with the 120Hz display, makes for quite an overall smooth experience no matter the circumstance. Everything ran smoothly on the unit, from the third-party apps to the Apple’s own OS. There are a few variants for your storage needs, 64GB, 256GB and 512GB, although prices do escalate very quickly as a result. Better to make use of a few cloud services. Benchmarks aren’t really a necessity for the iPad Pro, but it’s a point worth noting. Compared to the previous generation units, as well as some of its competitors, including the Microsoft Surface, both the 12.9 and 10.7 units outperform all other tablets, nearly doubling the scores on the first-generation units. Interestingly, it’s the 10.7 that slightly edges this one, although this could be down to the additional resources required to power the larger screened option. The performances are pretty well-rounded overall and specced in such a way that the user won’t need to worry about upgrading the unit for at least two to three years.

The battery life on the iPad Pro 12.9 is very good. You’ll easily be able to get through a full day’s worth of full usage without blinking an eye, more so than a few other devices you may have lying around, such as your smartphone and laptop. For lighter usage, you may be able to eke out a two-day window of operation between charges. Apple has managed to squeeze a 41Wh battery on the unit, which delivers a good performance. The one big issue I had with the unit was its charge time, which takes quite a few hours to reach 100%. Your best bet here is to perform your charge routines overnight while you catch up on some zees. 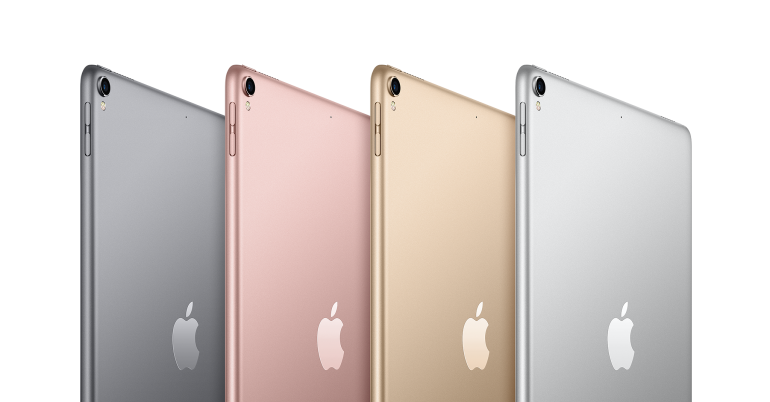 Although it’s not part of the contents when purchasing an iPad Pro, the most enjoyable part of my review experience was the Pencil. I had my doubts when I started using the device that it would actually match up against a regular pencil, colours, pens, and the likes. I’m surprised to say that not only was it able to match, but offer a much superior experience in some instances. I’m sure many artists, of any medium, may be readying their tiki torches, but hear me out. Imagine a list of different tools (pencils, pens, oils, paintbrushes, rulers, drop tools, and the likes) as you’re about to start your process creating art. Now imagine all that on a single device where you can switch it out to the next within two seconds while also having 16 million different colours to choose from while you’re at it. This feature alone makes using the Pencil quite impressive.

Another of the surprises of the Pencil is how it picks up pressure. Again, this may be something a traditional artist may call me out on, but I was more than comfortable shading away with different pressure levels to move from dark to light or vice-versa. What’s even better about drawing on the iPad Pro was that you can zoom into a specific area and draw finer details.

What I found odd about both the Pencil and the iPad Pro is that there’s no default Apple drawing software preinstalled or on the App Store. While you are able to use the Pencil with a degree of sophistication using the Notes app, you won’t be able to replicate a real-world experience and have to rely on third-party apps for this. There are quite a lot available, with some really good free-to-use apps, and a lot more paid-for apps with even better capabilities. One thing that annoyed me, across the three apps I tested, is the lack of a proper eraser tool. There may be a few apps that do offer this but, unfortunately, the ones I tested didn’t. Yes, I still enjoyed being able to erase certain points on my ‘artwork’, with a simple undo if I made mistake, but you didn’t quite get the smudge effect I so badly wanted.

Overall, I loved my time using the Pencil on the iPad Pro, brushing up on my old drawing skills without all the effort of additional investments to get started. It does take some getting used to, the rubber and glass combination of the screen and Pencil tip, but after a few lessons and tutorials, you’ll no doubt be one or two steps closer to becoming the next Picasso. 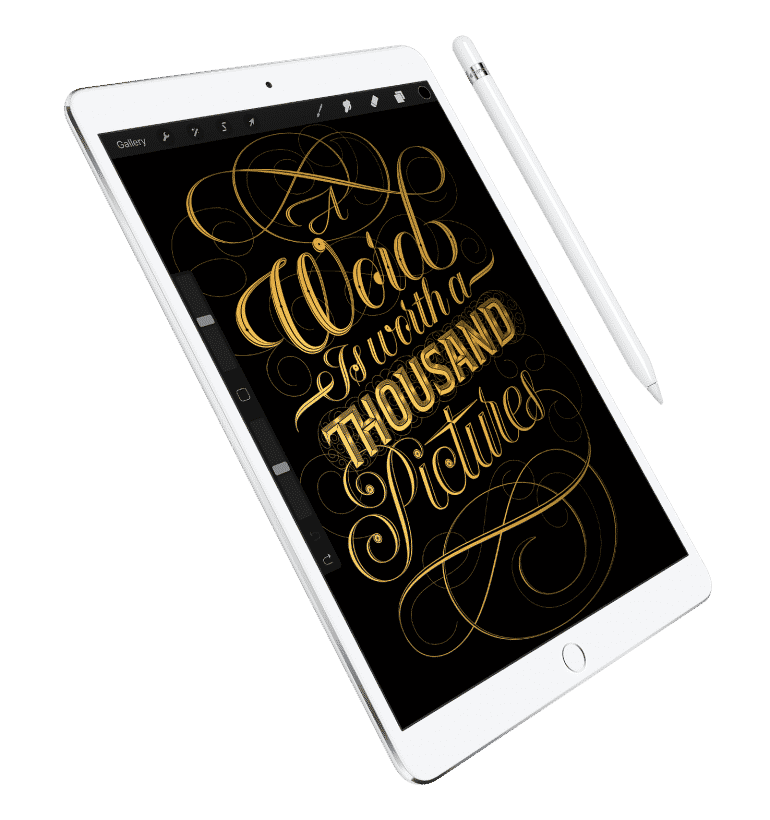 For my review, I was provided with Apple’s Smart Keyboard. This isn’t your standard Bluetooth keyboard as you find with most other tablets. There’s not even Bluetooth here. The keyboard connects to the iPad by means of a 3-pin Smart Connector, which simply clicks in place. This connection is almost fool-proof. In addition to having no Bluetooth, the keyboard doesn’t have a battery either, drawing power directly from the iPad. The unit’s materials are made from a polyurethane outer and microfiber inner, which gives a very premium look and feel. It does, however, cost a small fortune, R3,499.

As stated earlier, the iPad Pro was originally shipped with iOS 10. Thankfully, when I received the review unit, it shipped with the latest version of iOS. This means that there’s a lot more to offer as a result. These features range from better multitasking, easier file sharing from within the Files app, and cloud access through Google Drive, Dropbox and the likes, to name but a few. One of the biggest improvements in the software is its integration of the Pencil, reducing latency and fine-tuning the pressure sensitivity. While I wasn’t able to confirm the before and after of the upgrade, it is worth taking note of.

There’s definitely a lot to take in with the Apple iPad Pro 12.9 (2017) both as a stand-alone and as an update to the first-generation units. Yes, the unit is overkill for a tablet, and many users may not be able to extract the best performances from the device, which may be a bit of a waste. Where the unit will shine is in the creative space. Not only do the upgrades provide a much smoother experience for designers, there’s a lot there for creatives of other mediums such as musicians.

Compared to the modern-day tablet, even Apple’s own ‘normal’ iPad, the iPad Pro is relatively expensive, at a cost of R13,499 for the 64GB, entry-level variant. The full experience may also only be realised with the inclusion of the Smart Keyboard and Pencil in your shopping cart, adding a bit extra to your expenses. That said, the Pencil is a brilliant device, and definitely worth the investment alongside the iPad Pro units. The larger sized 12.9″ variant will also not be for everyone, but also adds a bit more substance to the creative exploration. Whether you’re investing in the 10.7″ or 12.9″ version, the iPad Pro is a worthwhile purchase you won’t regret.