Apple iPad (2017) Review – The Bargain Tablet Your Kids Will Love 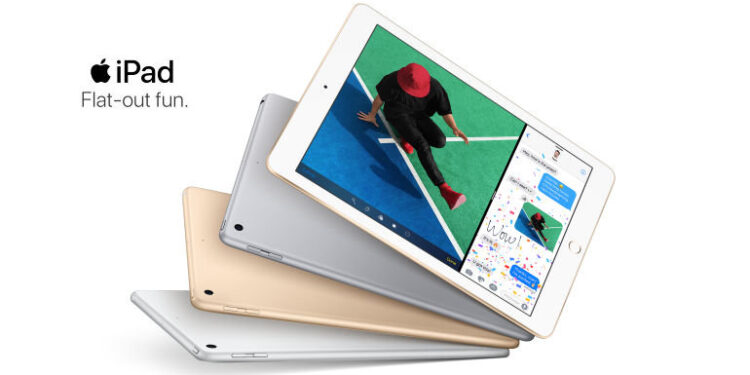 The Apple iPad revolutionised the mobile gaming industry when it was first launched in 2010, undergoing numerous iterations and upgrades in the seven years since. In fact, many iPad have been bought with the sole purpose of an entertainment system to be enjoyed by young kids, delivering endless amounts of mobile games for them to enjoy and providing a few minutes, sometimes hours, of quiet time for parents. Since 2012, the standard iPad gave way to the iPad Air and iPad Pro units.

Apple had one major problem with their iPad range. The original tablets were good enough to last for years if kept in good condition, which is why the company introduced the Air and Pro ranges. Finally, after almost five years, the company launched the 5th-generation edition earlier in 2017. How much has the industry changed over the years, and is there still a market for the average iPad? The iPad remains the iPad. Apple hasn’t changed much on the iPad throughout its seven to eight-year history, sticking to the same bevelled device with a bottom-centre home button, power button on the top, and volume rocker on the right side. Where the unit has been updated slightly is the size, while also stripping off a significant amount of weight. The iPad now measures 240×169.5×7.5mm, which is slightly narrower and shorter than the 2012 edition, but exactly the same as the iPad Air 2. While it is 1.9mm thinner than the 2012 model, it is 1.4mm thicker than that of the Air 2. The unit weighs 469g, substantially lower than the 662g of the 4th-gen unit, and 437g for the Air 2.

Even with the differences in height and weight between the three devices, you’ll only be able to tell these differences by placing the units alongside one another to provide clear distinction. And that’s the crux of the design and build. Apple has partnered with various accessory manufacturers to ensure backwards compatibility to older units, which provides an indication as to why Apple didn’t stray too far from the same design principles given the quite substantial accessory market for their devices. What’s interesting across all three of the devices compared here is that they all have the same 9.7″ screen with 1536x2048px resolution and 264ppi pixel density. Because of the differences in size, the screen-to-body ratio is the only difference on paper. That’s until you perform more substantial tests and you’ll notice more differences. The 5th-generation unit is slightly brighter, sharper and more colourful than the 2012 model, which shows good progress, but is a step down from the more superior Pro and Air versions. The 2017 iPad has removed the anti-glare coating found on the Air 2 and subsequent versions, with Apple claiming an increase of 25% in brightness. Apple did most of its work on the new iPad under the hood, moving from an A8X chip on the Air 2, and A6X on the 2012 model, to the A9 on the 2017 variant, the same you find in the iPhone SE and iPhone 6s. While it may not be the faster A9X found in the iPad Pro, it delivers quite a significant improvement to the units it’s replacing. The improvements are increased, thanks to the more recent iOS firmware updates and benchmark tests. But all the tests mean nothing if it can’t produce in the real world. Thankfully, it does. Comparing the performances and benchmarks of specific applications for the previous models listed on the web, the 2017 variant is a clear winner, away from the Pro models that is.

The three devices (5th-gen, 4th-gen, and Air 2) all have different battery capacities at 8827mAh, 11560mAh and 7340mAh, respectively, but all deliver approximately the same performances in active and standby times. This, again, shows the update in technology over the 2012 model, doing more with less, but down from the Air 2 version which has the overall better hardware.

The iPad 2017 doesn’t offer very many additional features, down to what the Pro has in its arsenal. It is not compatible with the Apple Pencil and Smart Keyboard and doesn’t have a Smart Connector. It also doesn’t have the Retina Flash and True Tone camera features. When Apple announced the new iPad, they shied away from the typical lavish event with bells and whistles. Instead, they silently announced the new device with a press release. This gives you a good indication that the tablet is not here to revolutionise the industry as it did in previous years. It’s more of an iteration and a refresh to the 2012 4th-generation version, which no doubt would be near end-of-life for all those who own one.

What’s great about the unit is that the price fits in with mid-range units at just R5,499. This is great news for all those looking to update their previous units and greater for parents who need to replace their kids’ gaming devices and don’t require all the gimmicks and underlying features of the more sophisticated units. The Apple iPad 2017, then, is good value for money.