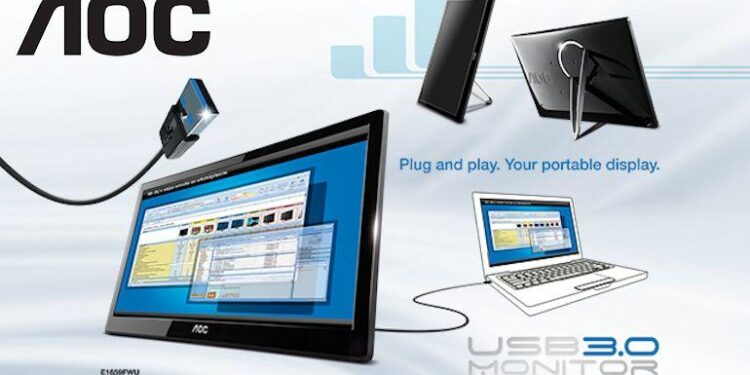 As the tech world moves forward, more and more manufacturers are opting to provide more mobile products. These companies aren’t acting on a simple whim, but rather the way consumer chooses to use their tech, not wanting to be limited in their usability while on the move. Despite the increased monitor resolution and larger screens, there is also often a need to have a second monitor to create a desktop environment that simplifies multitasking. AOC has been in the market of providing portable monitor solutions for some time now, and their latest offering, the AOC E1659FWU Display provides an enticing mobile solution to meet modern requirements. The aim of the E1659FWU is to be as portable as possible. Weighing just 1.1KG with a bezel only 23mm thick, half the task is already complete. The unit has a glossy black finish frame, surrounding the display. This glossy frame is prone to fingerprints, as with any other such surface. Since the display will only really be handled during transport, it isn’t as annoying as on many smartphones. Despite being labelled as a 16” display, the true size is a 15.6” panel. The display has a maximum resolution of 1,366x768px, and includes an anti-glare coating, which has an often undesirable side-effect of causing reflections in well-lit environments. Contrary to the unit’s mobile prowess, AOC has included a set of VESA mounting holes (four of them) on the rear, for those preferring to hang the unit on a wall. Even with its slim build, the unit includes a kick stand fitted to the rear that allows for easier use, and is able to double up as both a landscape and portrait stand, depending on your preferred use. The auto-pivot feature on the display means that you don’t have to make the adjustment via any menu when rotating. AOC’s silver logo is displayed to the left of the kickstand.

The second part to the unit’s mobility lies in its power source, a simple USB cable. The E1659FWU uses the USB 3.0 technology, and is one of the first USB displays to use this latest standard. The USB 3.0 port fits in a gap between the stand, and does not protrude from the frame to cause it hooking onto any material when transported, although AOC does include its own lightweight, neoprene sleeve for convenience. For the most part, setup is fairly straight forward. There is a matter of getting the unit connected with correct settings for optimum usage. When connecting the E1659FWU to my PC, Windows 8 had automatically detected it and was ready to extend my display to the unit. It is essential, though, that AOC’s DisplayLink software be installed to receive the best video signal and power from your device’s USB 3.0 port. In some cases, depending on the OS, the display won’t power on without having first installed this software. The software can be used as a control panel to set brightness, colour, contrast, and the likes. It is worth noting that if you’re not using a USB 3.0 port, it may be required that a secondary USB port be used to allow sufficient power from your device to the display.

While setup and use is seamless on PC-based tech, desktops and laptops, there are many bugs when using Apple’s Mac products. Firstly, there is a matter where it doesn’t always power on, irrespective of downloading the latest software from the official website. On other Mac units, after finally managing to get the screen to display, moving any windows across causes unwanted flickering. This flickering appears as on/off flickers, black and white flickers, and, more occasionally, red/green/blue flickering. After some research, it was discovered that AOC and DisplayLink are aware of these issues, and have been working with Apple for the past while in an attempt to correct the drivers.

While the unit it capable of displaying almost all video and image formats and resolutions, there is also a matter of your device’s actual graphics drivers, away from those of the unit. That said, on a standard desktop display, I am able to watch all 720p and most 1080p videos. Testing this on the E1659FWU produces different results. The 720p content posed no issues, with no evidence of lag and shuddering. For the 1080p videos, there was a definite difference in viewing quality, often met with frame rate drops and lag. Moving the same content onto another connected 1080p capable display removes the said lag.

What we didn’t discuss under the setup is that most of the settings on the device are set to half by default. This means that colour, brightness and contrast are not at their optimum settings, and appeared washed and dim from the onset. This is why it is essential to use the included DisplayLink software to increase these settings for best results. After this, colour and brightness were significantly better. That said, no matter how much adjustments I made to the colour, there was a hint of saturate blue hue across many images and easily notable when viewing whites. Increasing the red hue can only counter to some extent before it also overpowers the colour balance.

With its 1366x768px resolution, users can’t really expect HD quality imagery on the display. Quality is most affected when viewing text, as is often the case. While it is still legible, smaller text become harder to read, and can cause temporary blurred vision when viewed too long. Although that can be added when viewing any screen for far too long. At the same time, viewing angles are manageable, but not ideal for crowd presentations. Colours fade and brightness dims once the viewing angle passes roughly 45◦. There is a lot to consider before purchasing the AOC E1659FWU 16” Display. We start with the cost. At an RRP of R1,349 (available at Pinnacle Micro [http://www.pinnacleafrica.co.za/]), the unit isn’t as affordable as it could be. For prospective buyers, a standard desktop 23” LED monitor will set them back roughly the same cost bracket. While this does provide a better display, it is important to remember the E1659FWU’s portability. The unit is extremely lightweight, easy to use, and easy to transport. The additional cost then can easily be justified. The deciding factor, is whether you’re in the market for a portable display. If yes, then the E1659FWU is definitely a good option. Browsing around other price ranges, many other manufacturers also offer a similar product, but not as polished, and definitely not as affordable.