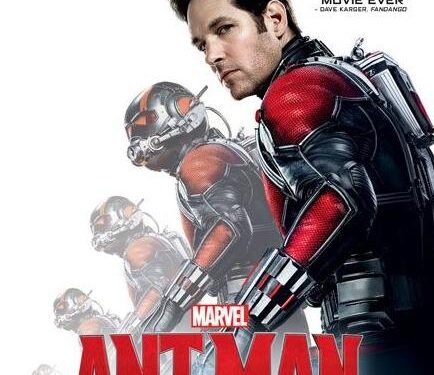 One of the lesser-known Marvel characters, Ant-Man, is taking its cues from the surprisingly successful Guardians of the Galaxy and delivering a heist comedy wrapped up in a comic book superhero film. Now the world’s smallest hero with the biggest heart has finally arrived on the small screen.

Ant-Man has a smaller cast, which works in its favour. We get to grow as Scott Lang (Paul Rudd) grows in the film and we feel each second of excitement when he shrinks as well. This movie is well-written and the scenes flow quite naturally. Unlike Age of Ultron, we do not feel as though the movie is jumping from scene to scene and that it is just rambling on to make it’s 120 minutes running time.

This is not the tale of the original Ant-Man. Instead, Hank Pym (Michael Douglas), the original Ant-Man from the comic books, is looking to save the world and he needs an heir to his legacy in order to do so. This is where Lang comes in. He is fresh out of prison and desperate for a second chance at life and, more importantly, at being a father to his daughter. One man can give him this new beginning but on the condition that he saves the world from an impending doom.

Darren Cross, a man obsessed with the legacy of the Ant-Man, and the boss of Pym Technologies has finally managed to re-create his mentors work. The Yellow Jacket is a weaponised version of the Ant-Man suit. Realising the threat posed by Darren Cross (Corey Stoll) and his Yellow Jacket prototype, Pym prepares Scott Lang for the heist of a lifetime.

Ant-Man is surprisingly good and certainly rivals the fun factor of last year’s highly successful, Guardians of the Galaxy. This film is not only packed with clever punchlines, but it also has some of the most amazing action scenes that Marvel has produced thus far. Expect big action being done on an almost sub-atomic scale. The CGI is simply brilliant and believable. The tiniest of spaces become the greatest of battlefields and the staging of these action sequences were amazing.

There are lots of names being dropped and quite a few cameos. The future of this franchise is looking good. From the opening to its closing, Ant-Man has it all.

Ant-Man looks great on Blu-ray. The transfers provides consistently faithful high detail (it was clearly shot on a digital camera). The image is crisp, razor-sharp and remarkably defined. Offering rich black levels and excellent contrast, pores are visible and you can even see fine individual hairs. This is great when checking out the tiny ants. But what else would you expect from a Disney Blu-ray release? Every small detail is intact.

The thunderous 7.1 lossless track does what it should and will rock everything in your living room. The audio is well balanced, with the soundtrack, sound effects and dialogue mixed to perfection. Crystal clear in every department — bass, treble, surround.

Many will be disappointed to know that there are no longer and Marvel One Shots on the latest releases. It would have been great to have seen a short about Ant-hony or perhaps Michael Peña’s Luis. Regardless, Marvel has filled the rest of the disk with behind the scenes featurettes that should keep those interested in the technical aspects of the film satisfied.

Here you will find:

Ant-Man has earned its spot in your collection as the last film of Phase 2 in the Marvel Cinematic Universe. Thankfully, this release is as good as any of Disney’s Blu-ray releases. Pity about the Marvel One Shot though.