I’m the kind of guy who will always root for the underdog. I love when a small start-up sticks it to the establishment. I tend to watch more fringe/indie films and almost always give the unknown quantity the benefit of the doubt. It’s because of this that I was so excited to get a copy of Anoxemia. I had watched the trailer on Fortress of Solitude and was honestly intrigued. The moody animation style and throbbing soundtrack piqued my interest. Add to this the fact that Anoxemia is developed by Badland Indie games, a division of BSK Games, I was keen as mustard.

So, armed with a plate of hot cross buns and a cup of tea, I settled in for the experience. The game greets you with some nicely stylised 2D drawings with some simple pan and scan animation. Then the lead protagonist, Dr Bailey, starts his narrative.

I’ll be honest, the voice casting for this character was a strange one. I kept finding myself focusing on the nasal quality of his voice instead of what he was trying to explain to me – something about his day starting badly and going South from there. His comms to the surface get cut, then he loses power to the submarine and then ends up on the ocean floor. The fact that there’s some foul play afoot is immediately apparent. So a fairly generic storyline so far, especially for a title that claims to be an adventure horror. 5-minutes in and the only thing that strikes as original then is the fact that there seem to be 2 protagonists, Dr Bailey and his operations drone ATMA. Anoxemia is a condition that results from oxygen deprivation in the blood stream. The effects are, amongst others, confusion and hallucinations, and that’s clearly what Dr Bailey is experiencing because, despite being stranded at the bottom of the ocean, he feels the need to continue the mission, which is to collect contaminated plant life samples!

I would be wigging the freak-out! Screw the mission!

Anyway, this is where the second protagonist comes in, ATMA. I found myself wondering who the real primary protagonist was at this point. The drone is the character you actually control. Dr Baily just goes where the drone leads. So much of this game has left me scratching my head like I’m missing something. Even the music and sound FX lend to this feeling of confusion.

Back to the mission. Your focus now is to follow ATMA and collect oxygen, energy and contaminated plant samples. This all happens in a 2D platformer type world. There is a lot of wait and follow type action as you need to dodge water mines, cannons, rocks etc, so nothing new here either. Having said all this, the game is not easy!

This wait and follow mechanic is both a blessing and a curse. On the one hand not directly addressing the character who, in the end, is the one who must carry out the mission and collect the different objects has its advantages, it’s just not a very efficient or intuitive style of game play, which often results in death. Lots and lots of death.

And when you die, you go back to the beginning of the stage. No saving half way or picking up where you left off. This imprecise type of control and unforgiving restart system is getting stale rather quickly.

The up-shot is that you will die often, so a game that would take you 3 – 4 hours to play front to back will take 11 life times, so lots of replay potential.

It’s a 2D platformer with lateral scroll action, set in a dark and gloomy underwater world that feels very claustrophobic. This adds to that feeling that there is more going on here that we are not seeing, like the entire mission is happening in the oxygen deprived mind of Dr Baily who is actually lying unconscious in his submarine, which is slowly filling with water, and this crazy world we are experiencing is his subconscious mind trying to make sense of what is going on, trying to find a way out of this dark and claustrophobic submarine before it’s too late! Either way, it’s a pretty linear experience.

Each level is fairly short, which is a good thing, considering how many times you will restart it, and presents its own challenges. As I mentioned earlier, you need to collect things like plant samples, oxygen, and energy to keep ATMA running. These are not optional. Run out of oxygen, you die. Run out of energy, you die, and there is no such thing as just moving on to the next level. If you haven’t collected everything you need in this level, you ain’t going nowhere! There is an element of puzzle solving as well, though nothing particularly brain-busting. Simple stuff like moving rocks and blowing stuff up to create new pathways. Again I found myself wondering if I’m missing something because, the challenges are not really complicated and almost feel like it’s just action to keep you busy while he delivers his thoughts on all things existential, philosophical and moral. The first time you hear these thoughts, they are actually quite provocative. By the 16th time you are doing the level, it just becomes arse-wrenching. Once you have cleared a few levels and you can start stringing these thoughts together, it does make for some thought provoking stuff.

I know I have been quite hard on this game so far, but all things considered, it is quite captivating, and again I say, there is more going on here than meets the eye. Sure the story line is a bit predictable, and sure the game play mechanics are a touch clunky, but what Badland Games have done here is make a game that is different, as far as console gaming goes. It’s rather captivating, has a remarkable amount of atmosphere and an interesting artistic direction. So, to try sum this one up, Anoxemia is not the most interesting 2D platformer I’ve played, it has many many weaknesses, but would I say buy it? Yes. Not because it’s good, in fact, I feel this should have been developed for mobile first. Its physics is very similar to Angry Birds. I say buy it because Badland are clearly an outfit not scared of taking risks, and I know that in future they are going to produce games that bend your mind like a serious case of anoxemia! 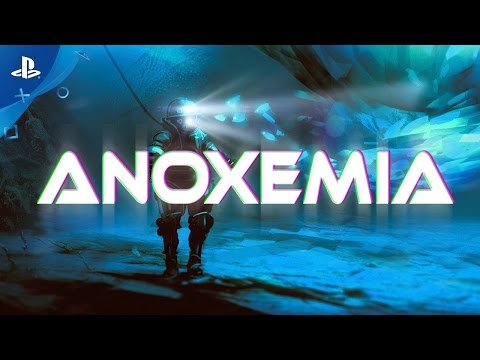