After the success of the Angry Birds mobile games, it was inevitable to see Rovio focus its efforts on a feature film. Why wouldn’t they? They’ve just about done everything they could with the franchise, even crossing it over with Star Wars. Sadly, the craze is over and it’s probably mostly The Angry Birds Movie’s fault. Bad bird! Bad! Hollywood already has trouble adapting video games into movies, what more with mobile games? What’s next? A film based on Temple Run? As preposterous as it might seem, a lot of marketing went into The Angry Birds Movie. Sadly, it was all in vain. 97 minutes is just too long to explain the simple premise of a game about pigs and birds.

Animated films generally get made in three categories. The first are the films that appeal to both parents and kids – the films that win buckets of awards every year. The second are films that are made for kids, but could possibly appeal to adults too, depending on their tolerance (ie. The Smurfs). Lastly, you get the animated films that are made solely for kids. They are the ones parents dread. The Angry Birds Movie falls in this category. In fact, it might have been better served as a direct-to-TV Saturday morning cartoon. Here the main angry bird is Red (voiced by Jason Sudeikis), who really doesn’t get along with the other birds. His irritation and anger issues often cause him to act out. His actions land him in an anger-management class with Chuck (Josh Gad). Soon a ship full of green pigs arrives. The pigs begin to entertain the birds with songs and dancing, but Red doesn’t trust them one bit. To cut a long story short, the pigs end up stealing the bird’s eggs. Hence the title, angry birds.

Parents can slide this one into DVD player and enjoy a good nap. It’s probably not for you. As cute as the animation looks, The Angry Birds Movie is boring and average. It should be flying high, but sadly it never quite takes off. The game is more fun! The film will just make you an angry bird. 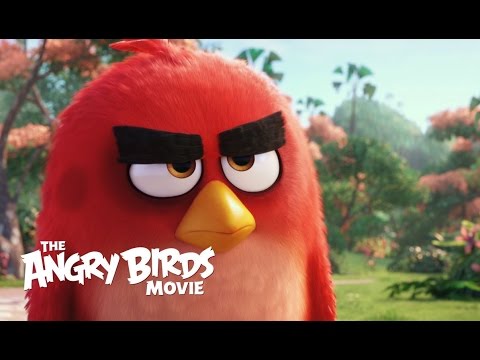