Among The Innocent: A Stricken Tale Review – A Gritty Mystery Adventure Game 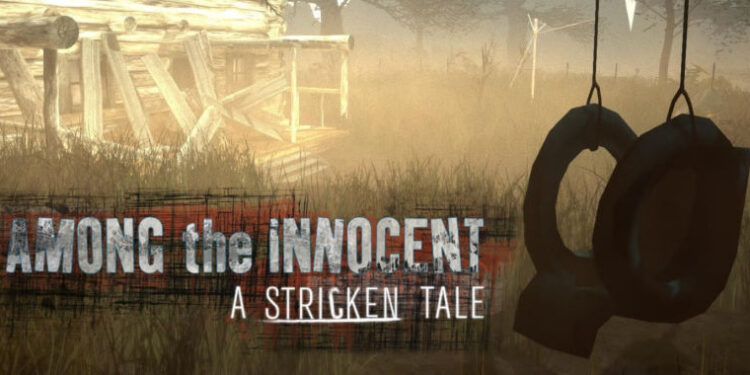 There’s been a great push on indie games of late, many of which have been really good. South Africa too has seen some growth in the gaming industry when it comes to developers and local development. One title that was a huge hit among locals and the international community is Broforce. Released in late 2015, the game gained traction on Steam in 2016 and quickly became a best-seller. Zero Degrees Games, a local development company lead by Geoff Burrows, hopes to achieve the same with their indie game,Among the Innocent: A Stricken Tale. Struggling writer Peter York has an argument with his girlfriend and jumps onto his motorbike for a drive to cool off. But just as he begins to calm and his mind clears, he finds himself on a dusty road off the highway. Within a few minutes of having turned off the main road, he encounters a rockslide, which not only blocks his path of getting back to the road but also damages his bike and injures him. He spots a cabin in the distance, hoping someone would be able to assist, but finds it abandoned. Now struggling with his injuries, he decides to take refuge in the dilapidated cabin for the night.

This part of the story takes place as a narration over a monochrome storybook filled with drawings of the goings-on. The start of the campaign isn’t very complicated, but the minimalist approach sets up what becomes a creepy story. The story takes place in the Free State, which may make it creepy in itself, but the location makes for a great setup of the bizarre. Although there isn’t much happening in the form of events and action, the mystery surrounding the cabin and the farm on which it takes place is intriguing. Among The Innocent‘s story ends somewhat abruptly, although this is only the first chapter of five, and sets up a decent start for the series. This point-and-click adventure is not only minimalistic in its approach to the story being told, but in the form of its gameplay too. The controls are very basic, with only a few additional keys required over the navigational keys. These include a key for the map, notes and inventory. The use of the mouse and navigation keys are the primary source of interaction with surroundings, as you attempt to find your way out of the cabin, and off the farm. Items to which you’re able to interact with are highlighted as you hover over them, making it easy to engage. Not all interaction items are useful, though.

The game relies heavily on the player’s ability to solve puzzles with hints in the form of notes and some onscreen text. It is by no means straightforward, as you’re often left running between areas to search for missing clues. For each area on the property, there’s at least one challenging hurdle to overcome in the form of a puzzle, whether it be simply getting into or out of a building, or simply piecing together tools and equipment to utilise. One helpful feature, which saves countless hours is the use of the map. Once you’ve located a position on the farm, it is then drawn on the map, and players can simply click on the location to skip between areas. Given the reasonable size of the property, and the clues scattered throughout, there’ll no doubt be a lot of back and forth between them.

Solving the puzzles of building tools and fixing broken equipment is not straightforward, but there are some basic mechanics that assist in putting items in place in the form of a shadowed layout of where an item should be positioned. It is worth noting, though, that the layout only appears once you’ve collected the item needed to be positioned there. Some items are reusable, so adding them back to your inventory is essential. Where the puzzles really become tough, and can easily add an hour to your overall gameplay are the obscure challenges, such as deciphering codes. Often times, you’ll run into a glitch or two within the game, which results in strange behaviour or not being able to solve a particular puzzle. On at least one occasion, I had to restart the game from an earlier saved game to effectively reload the game’s trigger, which then produced the correct result. The game does offer an online hint book to circumvent any catastrophic glitches. Indie games need not rely on great graphics to persuade the player to a sense of enjoyment, but rather a good story. Among The Innocent, however, delivers a few great moments of visual appeal across the dusty terrain and sunset background. Apart from the first evening, there is no day/night cycle, and the assumption is that all the events take place within a single day, which could prove to be true. There were one or two glitchy renders in certain areas, and a few pixelations in others, but nothing too severe. You shouldn’t expect AAA-grade graphics here, but it is pleasing.

The game, however, does offer a great score, not only from the introduction music but to the background noises and event and location-triggered music, which add a truly eerie effect to certain instances. There are no real scares to be had in this game, but the drama added to a scene with the score builds some intense moments of mystery. While Among The Innocent is a good game, it isn’t great. There are a few underlying issues that could deter many users from returning, although the team has already delivered two major updates on game fixes. There’s a lot to be learned from this first chapter, but I’m excited to see where it’s heading, especially after the ‘incomplete’ ending.