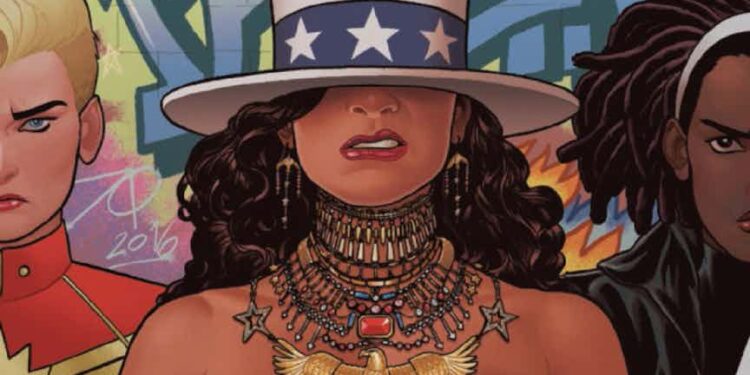 After arriving in World War Two and punching out Hitler, Miss America Chavez is given a quick lesson from Peggy Carter about long-term strategies. Upon returning to Sotomayor University, America laments her academic progress but attends a lecture regarding the systems which exist in the world – and the value of being an individual who marches to their own beat. When the university is attacked by cyborgs, the sparks fly on campus. Yet all of that is just the beginning of America’s troubles, as she’s paid a visit from some irate fans who feel she’s ignoring their online worship… We review America #2. After a first issue full of love-or-hate writing, America #2 sees some improvement in terms of making one of Marvel’s most diverse characters more appealing. While the dialogue still seems forced and the story seems to be a cut-and-paste of ideas, it also offers some moments which make for entertaining reading. Granted, there’s a fair amount of heavy-handed exposition and the story still seems unfocused, but at least it isn’t as clumsy as in the previous issue.

So, on the whole, America #2 is an improvement even if it isn’t a great comic book by any means. Which is a good sign.

Now that’s been said, it’s time to grab my soapbox and address the elephant in the room: Marvel’s apparent flip-flopping regarding diversity in comic books.

It’s been a rough couple of weeks for Marvel. First, there were statements made about how their push towards more diverse characters has hurt sales, then a back-tracking at the outcry over that statement from some quarters. All that SJW nonsense is still going on, and now there’s the fiasco with X-Men: Gold’s artwork. Of late, it seems like Marvel can’t do right for doing wrong and every day seems to bring some new problem for the House of Ideas. For some, this may be hold all the macabre fascination of watching a road accident, but it also points to one of the biggest issues in comic books lately. What should comic books even be right now? Should they try to leapfrog their way into a more broadminded future, or play it safe by retreating to what worked in the past? What’s causing the sales slump anyway?

For some, they’re too diverse, and the minute there’s a mention of Marvel course-correcting they’re attacked for not staying diverse enough. Because nobody’s willing to compromise, Marvel appears to be trying to satisfy each fan base individually and, as a result, they’re now satisfying no-one. Of course, that isn’t quite true; many of their comics are telling great stories with compelling characters. Sadly, it seems like all the empty vessels making the most noise don’t seem capable of acknowledging that.

Astonishingly, the solution is mentioned in this issue of America. Marvel and its various titles just need to be true to themselves. America may be too diverse and progressive for some but, as a character, she’s absolutely needed. She represents an aspect of today’s society. But the Marvel U is a big place, and there’s no reason why the old school can’t co-exist with the new. Let America be America, but let Wolverine be Wolverine and Thor be Thor too.

Those who say that Marvel isn’t what it used to be are forgetting that Marvel comics has had a social conscience since the very beginning. It’s just more obvious now.

Real problems with some titles, like general poor storytelling and too many events and crossovers, do need to be addressed. They’re bad for business. However, to blame diversity or a lack of it across the board for the sales slump is clouding the issue. If someone doesn’t like a character like America because they find her offensive in some way, then they simply don’t have to read it. But that doesn’t mean it shouldn’t exist.

As a book, America has its problems and, hopefully, they’ll fix them. The same could be said for other series, and for Marvel in general. It’s fine for both sides to disagree on the politics, but tolerance has always been Marvel’s message for everyone. Any fan who knows their history should understand and accept that. The message at the heart of America #2 is one the company itself should heed. Being true to itself is what counts, whether that means returning some classic characters to their rightful places or allowing newer, more diverse ones to flourish. Once they learn that lesson, Marvel comics overall will be a better read for everyone on all sides.