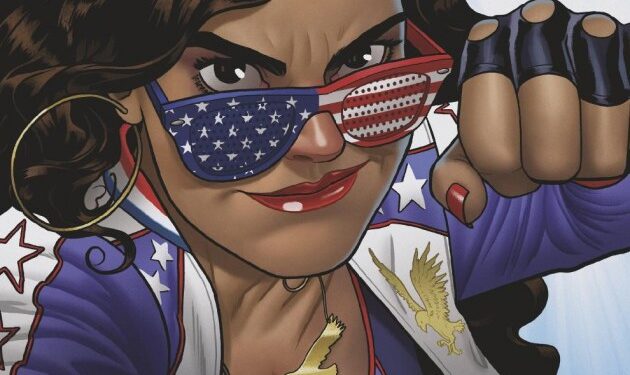 America Chavez – Miss America – has a busy life. Flying around the Multiverse, being a superhero, saving lives and defeating intergalactic villains is plenty for anyone. Throw in relationship problems and going to university, and it may be too much for anybody to handle even if they were a member of the Ultimates and the Young Avengers. Especially when her new teacher seems out to get her, and the only way to try and make an impression (and get a passing grade) is to try out an experimental time machine… We review America #1. After all, it’s a first issue for MAC, and lately she’s been making a bit of her name for herself in the Marvel U. She’s walloped Captain Marvel, had one of the most emotional reactions to what happened to She-Hulk and Rhodey at the start of the second Civil War, and is even in a Lego game. Plus, she’s a good example of how comic books should be more diverse, since she’s a Latin-American lesbian.

Unfortunately, things fell apart pretty quickly in America #1. America comes across as an unlikeable character, full of arrogance and attitude but little else. Yes, we see her being the hero within the first couple of pages, but her headstrong nature and lack of concern for others makes her less playful and more one step away from being a bully.

Do things change when she hits university? No. After a hazy explanation of her university plans and some sloppy references to remind the reader of how weird this college is, America plays the passive-aggressive card in feeling that she’s being picked on by her teacher. Since she showed up late for class, seems to have no clue about what kind of education she’s signed up for or any interest in the subject itself, it’s hard to sympathise with her. So what’s the solution? She uses old friend (and fellow classmate) Prodigy’s time machine, hoping to ace her class without even trying. Does nobody care about the dangers of time travel across the Multiverse?! Yes, time travel has been a part of the Marvel U for ages, but here it’s used in such a flippant way with no thought that it makes DC’s Legends of Tomorrow show look like a hard-science lecture from Michio Kaku.

Even the tone of this makes it hard to tell who this title is aimed at. The in-your-face nature, unfocused scripting and clumsy dialogue like MAC saying “Holy menstruation” as an expression is heavy-handed and off-putting. The entire package comes across as trying to be Squirrel Girl, but lacks the charm, warmth and wit to make it happen.

I’d really hoped for more from this, and maybe it’ll deliver, but it’s unlikely I’ll stick around to find out. Usually, I tend to give even the worst of titles a fair shot before discounting them, but this offered nothing to make me want more. Marvel is currently under fire for changing their landscape too much in recent years, and issues like this aren’t helping their cause.

Diverse characters like MAC do deserve to be out there alongside the legends, but sadly America #1 doesn’t prove why.