Earlier today, AMD announced what many knew by its codename, Project Polaris. Now official, the companies new graphics card, the AMD RX 480, will be the most affordable VR-capable graphics card on the market, with starting prices of $199. 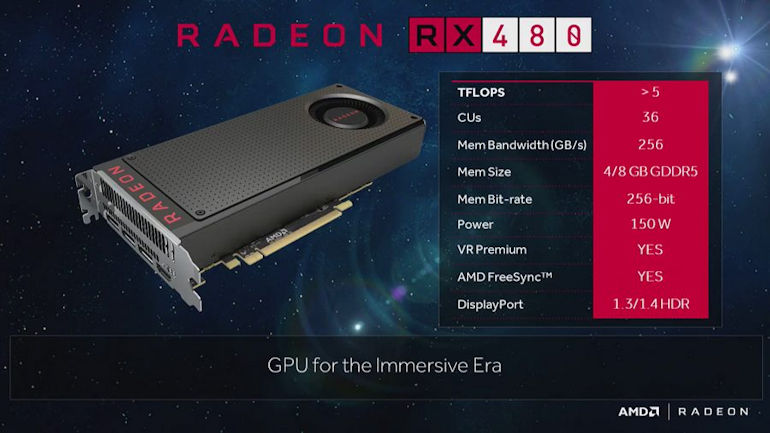 Many assumed that today’s announcement would have been more along the lines of releases a direct competitor to NVidia’s amazing 1080GTX card, the RX 480 came as a bit of a surprise to many. To add some perspective, NVidia’s 1070GTX, which was also revealed earlier this week, will set you back $380, while the most powerful GPU, the 1080GTX a cool $700 or so (which has already been tipped at over R13,000 when it reaches South African shores). The new GPU is based on the AMD’s new Polaris 10 XT architecture, and is hoping to entice a larger audience over and above the hardcore gamers, but also those wanted access to the latest VR-enabled PCs.

The unit marks the 4th generation of AMD’s Graphics Core Next (GCN) technology. Specifications wise, the RX 480 sports more than 5 teraflops of computing capability, 36 CUs, 256GB/s memory bandwidth, will consume a mere 150W of power, and will come in 4GB and 8GB models. The unit delivers a good mix of power and efficiency as the numbers above are to be believed. VR support will allow for both HTC Vive and Oculus Rift units. At the announcement AMD’s Radeon head, Raja Koduri, went on to announce a few key figures that make the card a little more impressive. While the presentation showcased the card running the new Doom at maximum settings, Koduri didn’t really discuss any numbers (FPS or otherwise) in that regard. But, he was more than willing to discuss the dual-configuration (running two cards simultaneously). The configuration clocked 62.5FPS running Ashes of Singularity, compared to the GTX1080 at 58.7FPS. Additionally, the setup only reached about 50% of its computing capacity, whereas the 1080 was clocking near 100%. And when you stop to think about that, two RX480 units will set you back just $400.