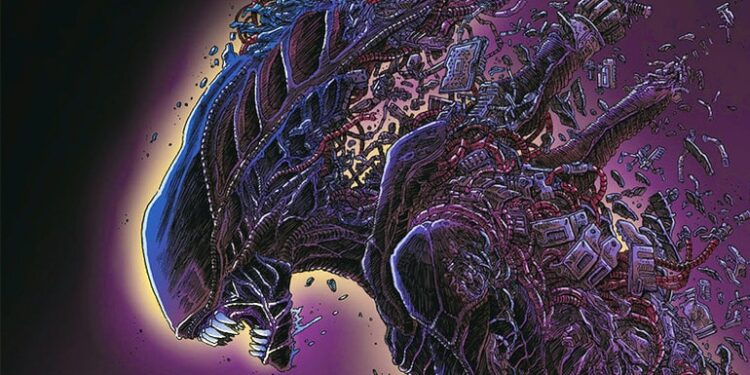 Aliens: Dead Orbit is a four-issue miniseries written, illustrated, and lettered by James Stokoe, and it may be the best Aliens comic I’ve read in years. I’ve written before how Alien stories have a nasty habit of cannibalising, then regurgitating, their own plot-lines, and from the offset, Dead Orbit appears no different. A rag-tag crew man a derelict space station, Sphacteria, orbiting a nondescript planet [he types, awkwardly foreshadowing the title], have to deal with a seemingly unmanned salvage vessel that autopilots into their vicinity. Being the good Samaritans (and Weyland-Yutani company people) that they are, they set off to investigate. A terrible accident forces them to evacuate, but not before they rescue three badly disfigured members of the floundering vessel’s crew. As the Sphacteria’s doctor tries desperately to keep the three alive, the rest of the crew work on figuring out how and why they’ve arrived in the first place. But, PLOT TWIST, they’re not alone!

Sound familiar? It is. And it’s perfect. Dead Orbit is the most faithful Aliens comic I have read in the last decade. While it has its fair share of faults (I’ll get to those in a minute), at its core, it is an exciting, engaging tale that draws heavily from the tonality of the original films, not for cheap, pop-nostalgic head nods, but because the author appears to legitimately care about the source material. Upon the mire that is Ridley Scott’s post-Prometheus cluster f**k, Dead Orbit lies like a life-raft – or perhaps some kinda Giger-esque gondola – ready to lift you up, out, and carry you away on an exciting, claustrophobic ride through tight corridors, pneumatic doors, blood, guts, and cigarette smoke.

At least four of my favourite things.

What impresses most is Stokoe’s ability to successfully translate the sense of claustrophobic isolation that permeates the first two films onto the two-dimensional pages of a comic. The word that best describes his illustrative style is ‘viceral’, and he uses it to its fullest potential, cramming the frames and panels with incredible detail and almost obsessive linework to the point that each page is a work of art unto itself. Stokoe’s story is told as much through the artwork as it is through the text, weaving the narrative through copy and visuals to create a tale that is almost filmic in its experience. You NEED to examine each panel. While many artists will try to sum up the action of a scene in one full page, action-packed expose, Stokoe forces you to eke through the tension step by step in a fashion that is most reminiscent of the original Alien film. His panel work is like an anxious heartbeat beating a tight tattoo across the pages. This is a stand-alone comic by a writer and artist who understands the franchise, free of any lip service to the convoluted set of new canon that has bubbled up since Prometheus. It is a book that anyone can enjoy, whether you’re a dedicated fan of the Alien universe such as I, or stepping into it for the first time.

None of this is to say that it is perfect, however. As I mentioned, the story has its faults, not the least of which is a strange sense of naivety that carries through in the writing, from the first page all the way to the last. Perhaps this has to do with James Stokoe being primarily an artist, not a writer (Wikipedia doesn’t list a single writing credit under his name). The tale is told in media res, starting towards the end, then veering back and forth through time, mirroring action along the top and tale of the story that, while not unreadable, feels clunky and at times unnecessarily confusing. It’s a tactic often employed by young writers to create tension or set up twists (I have been guilty of it myself) and, while not bad per se, can too easily be used to disguise a story lacking in dynamics. Similarly, while the level of detail in the line work in Aliens: Dead Orbit is truly commendable, I found the character illustrations verging on amateur. While in no way a deal breaker, it’s simply… disappointing. In a book where every inch of each page is filled with a unique flair and almost tactile detail, the familiar, stylised anime-esque expressions are a letdown.

All this said, the most disappointing thing of all was that I didn’t get to read Aliens: Dead Orbit as a physical book. I can’t help but feel that I missed something of the experience scrolling through it on my tablet instead of leafing through it page by page. It’s a book that I want to hold it in my hands. It feels emotive and substantial, like a worn, old VHS or a 90’s grunge gig poster.

Aliens: Dead Orbit is a beautiful, naive work of art that I would be happy to have on my shelf.