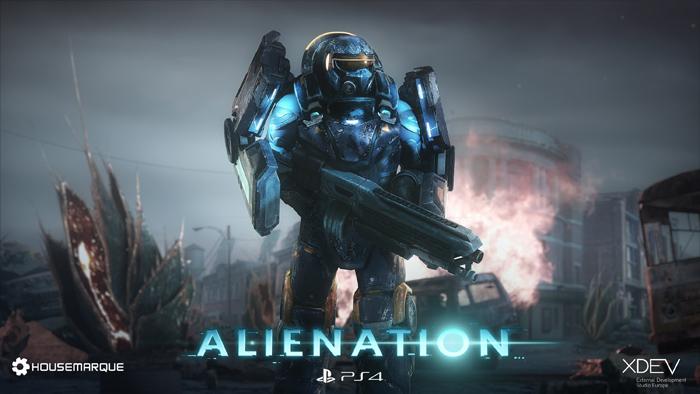 Aliens have invaded Earth and it is up to you to take it back using big guns and even bigger explosives. This is Alienation. Housemarque has a gift for developing some of the best twin stick shooters out there, with Dead Nation being one of my all time favourites. The way that they combine great controls, colourful environments and huge explosions has made them masters of the genre and Alienation is no exception.

The game starts off quickly wasting no time with exposition. Aliens have invaded and you have to kill anything that walks, crawls and scutters. Alienation is a combination of RPG and twin stick shooter and these two genres compliment each other beautifully. Players get to choose between one of three specialist soldiers, each with their own unique armour and abilities.

The first is the Tank, and as the name implies he can take quite a beating and also packs quite a punch. The next is the Saboteur, a sneaky sort that can cloak and call in airstrikes from a safe distance. Lastly, there is the Bio-Specialist, who uses nanotechnology to heal or deal damage. Each of these classes feels unique and plays quite differently, thanks to their varied abilities and weapons. Knowing which strategies to employ with which class is integral, and exploring which abilities to use in what situation became an addiction. Each Class’s arsenal consists of three main weapons; a submachine gun, heavy weapon and a special weapon. Special weapons range from shotguns to heavy machine guns. These weapons are supplemented with a fourth, which consists of grenades and landmines.

Seeing that combat is the backbone of the game, it is wonderful that it works so well and feels so fluid. Running and gunning while explosions are going off all around you is exhilarating. Wiping out a huge group of aliens is satisfying. Each level though exquisitely designed with multiple paths to your objectives is packed by aliens. You only need to take a few steps before becoming swarmed. Although these moments might seem chaotic I was never unable to think myself out of a situation. Sure I died a lot, but that was mostly due to stupid decisions from my part or those moments when I felt just a little too brave and paid the price.

At your deposal is a huge arsenal of weapons and loot that players will be collecting along the way. These are usually dropped by enemies or stashed away in crates.  Each weapon has their own stats and rarity such as common, rare and legendary. Depending on the rarity of the weapons they can be upgraded using different materials and upgrades found while on missions.

Not only do players take on main missions, which consists mainly of the go there destroy that or go there defend that type, but each area also has a few side missions and random events to distract you with. Completing these and killing aliens nets you XP points which in turn gives you points with which to upgrade your passive or active skills. Acquiring these skills quickly become a necessity if you want to survive the waves of enemies. It’s this cycle of killing, upgrading and levelling that becomes so addictive. I found myself losing track of time as I hunted for the next weapon or just enough XP to reach the next level.

One gripe I initially had with the game was that, unlike Dead Nation, Alienation does not have a couch co-op mode. For someone who played most of Dead Nation with a buddy on the couch, this news was a hard blow. Initially, I played the game solo and, while it was both fun and frightening at the same time, I found my experience to become exceedingly better as I levelled up and became more powerful. Of course, the struggle to get to the point where I wasn’t consistently dying was made all the more rewarding because of that struggle.

I finally go to a point where I decide to pair up with a team for some online co-op fighting. To my surprise, I found myself getting caught up in the fun of playing in a team.  The depth of strategy that I found while playing solo became even more apparent as my team and I had to combine not only our fire power but abilities effectively in order to survive. While it is a totally viable option to play Alienation solo, it is when playing with a team that the game truly begins to shine especially when your team starts to work together like a well-oiled war machine. I should also mention that Alienation is a beautiful and surprisingly colourful game, as there is a great deal of attention given to even to the smallest part of a level. It is sometimes difficult to appreciate the beauty and detail as you will be running around frantically shooting most of the time. I wouldn’t do the game justice if I also didn’t mention the really good looking explosions, I found myself caught in a blast or two after becoming distracted with their deadly beauty

Alienation is a much deeper game than I expected the RPG and twin-stick shooter mechanics fit together perfectly, and the addictive cycle of levelling and looting has and will keep on entertaining me for hours. Even if you aren’t a fan of online co-op Alienation is still a game that you should not miss. Now I need to get back to saving the earth and shooting some aliens along the way. 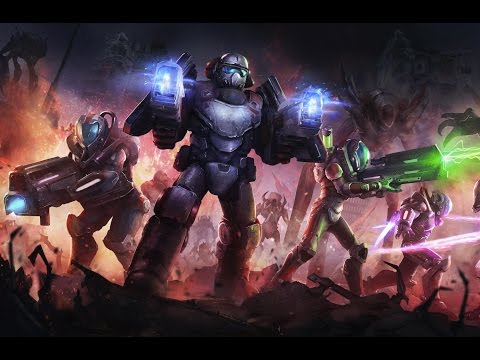