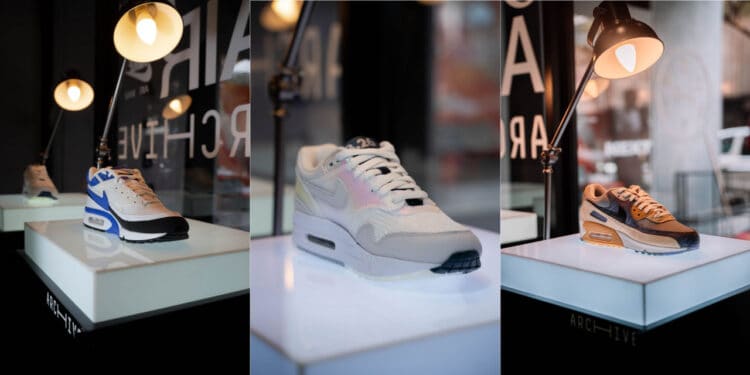 In celebration of Air Max Day 2022 on the 26th of March, Archive and Nike collaborated for the Nike Open Air Day event. The event was held in Braamfontein at the Thirteen venue.

The spot was chosen with the air over Braam always alive with energy. To bring discussions to life, the Open Air Conversations was sparked by creative minds and trailblazers. These young talents showcased their talents with their art at the event.

The art was inspired by the theme of their vision for the future of Nike Air.

The event kicked off an action-packed day that featured creative workshops, and inspirational panels. A select group of artists were invited to attend these sessions. These visionary artists included talents such as Natalie PNG, Xopher Wallace, Githian Coopoo, Sandile Mhlongo, Tammi Mbambo, Sibot and Talia Ramkilawan.

As part of the showcase event, Archive also announced the release of its latest range of Nike Air Max styles. The iconic brand dropped several new styles, which were immediately available for purchase at the Archive store in Braamfontein.

The Nike Air Max is one of the most popular sneakers to date, having first been released as the Air Max 1 in 1987. It has been featured in many pop culture events, movies and music videos over the years, including Spider-Man. Air Max Day is celebrated each year on the anniversary of its first release, 26 March 1987.

In addition to launching new Air Max variants and showcasing the invited artists, guests were also treated to the Open Air Exhibition and Open Air After Party. Part of the exhibition was to showcase the talents on show at the event with their inspired artworks on display. With the select group of invited artists having been shortlisted from many other entrants, there could only be one winner chosen.

Tavongaishe Chikwanda was selected as the final winner of the Nike Open Air Art Prize. The prize of R100,000 will go towards their creative career. For the young artist, the sky is now the limit as they continue their journey with their budding career to the next level. All of this through the courtesy of Air Max.

The Nike Air Max sneaker was launched as the next revolutionary performance mechanism designed for athletes. It has since become a household name over the past 35 years as a symbol of street style and culture.

The Nike Open Air Day event continues this legacy, as it continues to soar around the globe, as well as here in South Africa.